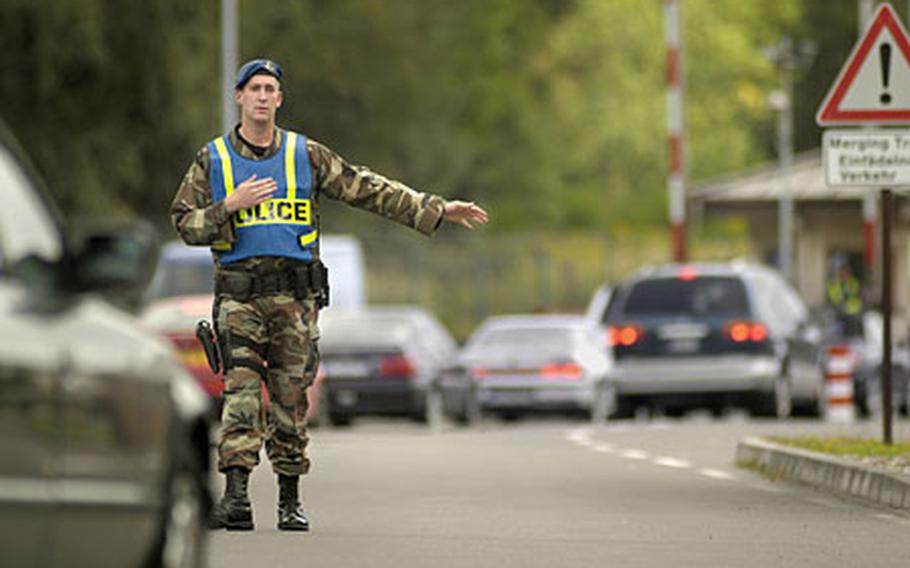 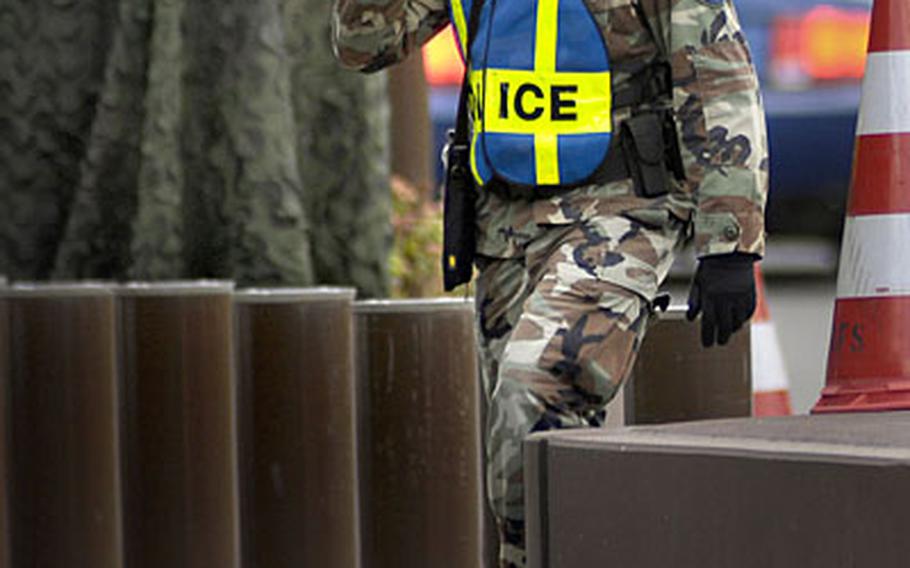 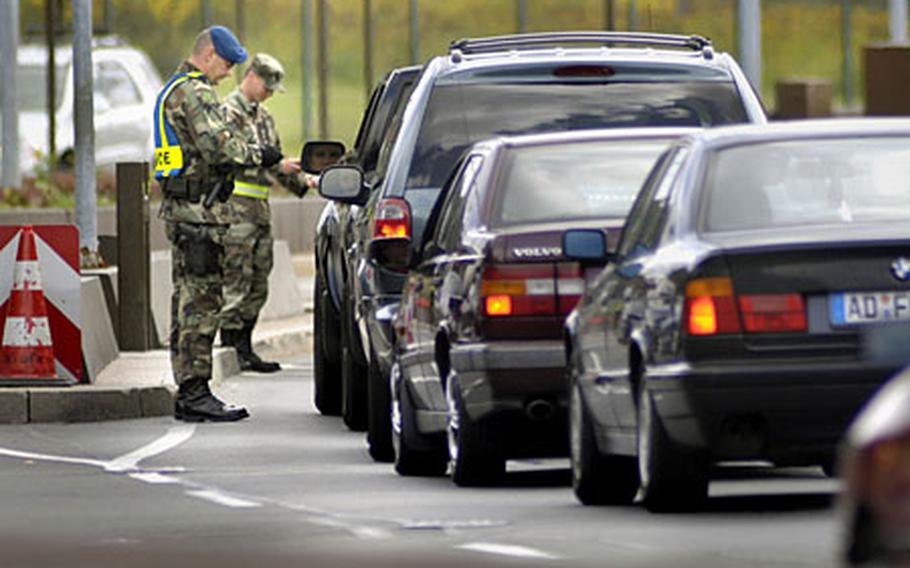 In this undated file photo, security personnel check identification at the west gate of Ramstein Air Base, Germany. (Ben Bloker/Stars and Stripes)

RAMSTEIN AIR BASE, Germany &#8212; The arrest of three suspected Islamic terrorists shocked some Americans stationed in the Kaiserslautern area and shook perceptions about their safety overseas.

Senior Airman Jeffrey Barnett, assigned to the 1st Combat Communications Squadron at Ramstein, reacted to the arrests with disbelief, adding that many Americans stationed at Ramstein and elsewhere often take security for granted.

Ramstein is the U.S. military&#8217;s biggest base in Europe and the Kaiserslautern area is home to the largest American military community outside the United States with more than 50,000 people.

The Air Force encouraged families on Wednesday to practice &#8220;increased security awareness&#8221; in the wake of Tuesday&#8217;s foiled attack, said Capt. Joel Harper, a spokesman for U.S. Air Forces in Europe, which is headquartered at Ramstein. At the Air Force Leadership School in Kaiserslautern, Barnett said leaders told airmen to look out for anybody or anything suspicious.

Although some media reports quoted anonymous sources stating that the suspects had targeted Ramstein Air Base, U.S. European Command spokesmen told Stars and Stripes that German authorities did not tell them that any specific base was a target.

EUCOM spokesman Lt. Cmdr. Corey Barker said the command was notified before the arrests were made by the U.S. Embassy, which was tipped off on the capture by German authorities.

At Ramstein, security at the base gates was visibly increased only slightly and it appeared as though it was business as usual at the airfield, with cargo planes landing and taking off at the military airlift hub. But reports that the alleged terrorists targeted locations frequented by Americans, including bars, clubs and other off-base spots had both Americans and Germans living near the base on alert.

Christine Grob, a German woman who works the reception desk at the Hotel Circle Inn, said she usually doesn&#8217;t think about the possibility of an attack at the nearby base. But news of the arrests got her thinking the worst. The hotel serves mostly Americans and is less than a mile from the air base&#8217;s West Gate.

At Frankfurt International Airport, there was little evidence of any significant increase in security, though there did seem to be a few more uniformed police officers walking among the thousands of travelers that pass through Europe&#8217;s third-busiest airport every day.

For Americans, the closest thing to home at the airport is the United Service Organizations lounge in Terminal 1, where jet-weary travelers can grab a cup of coffee, watch a little television and get advice or assistance. And on just about any day of the week a member of the 64th Replacement Company, based in nearby Hanau, swings by the lounge to link up with in-bound soldiers. The company exists to welcome and provide initial logistical support for new arrivals.

Army Sgt. Robert Wilson, an airport liaison, said Wednesday that he found it &#8220;not too shocking&#8221; that Frankfurt airport would be targeted by terrorists. Reports of the arrests haven&#8217;t altered the unit&#8217;s posture, Wilson said.

The good thing about the arrest is that everyone will be on alert, Barnett said.

&#8220;I know the lines are going to get longer for searches and everything but I&#8217;m willing to go through that extra mile to keep me and my family and my co-workers safe.&#8221;