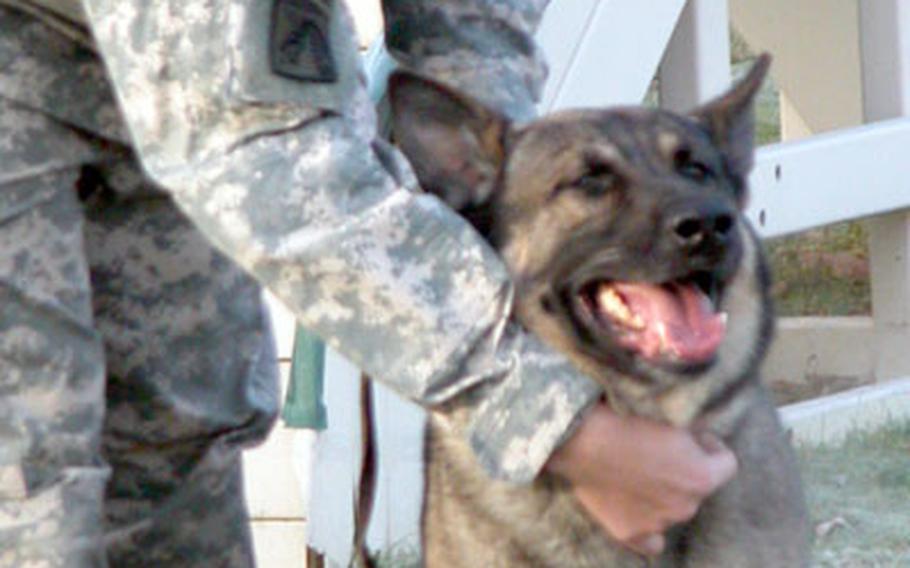 Gudy, a four-year-old German shepherd, was trained at Lackland Air Force Base, Texas, before being sent to Germany. (Geoff Ziezulewicz / S&S)

Collinsworth took the dog into the training yard of the 95th Military Police Battalion for the day&#8217;s maneuvers. Soon, the formality of the day eased just a bit, and the natural rapport of man and dog came through.

But between words of encouragement, the fetching of sticks and an occasional &#8220;good boy,&#8221; Gudy and Collinsworth were all business as they spent another day perfecting their dependence on each other, and the skills that save the lives of troops downrange.

Literally and figuratively, it was a world away from the pair&#8217;s 2004 Iraq tour of duty, where Gudy sniffed out car bombs and ammunition caches. Dogs of Gudy&#8217;s caliber, and their human masters, have become an indispensable part of American combat operations throughout the world, particularly in the volatile Iraqi and Afghan theaters.

In Iraq, dogs that can sniff out the traces of a bomb can mean the difference between life and death. Their keen senses can hear things not audible to the human ear. In Iraq, man&#8217;s best friend has joined his human compatriot on the battlefront.

&#8220;This is the first conflict since Vietnam where dog handlers get Purple Hearts,&#8221; said Army Sgt. 1st Class Kenneth Throckmorton, military working dog program manager for U.S. Army Europe. &#8220;They are out there in the mix.&#8221;

For most of the 1990s, most military dog teams were sweeping bunkers for booby traps in Bosnia, or providing narcotics support on American bases, he said. But after Sept. 11, 2001, the military fell into a more defensive posture, and the dog team&#8217;s work changed, he said.

The more than 100 military dog teams throughout USAREUR also support operations in Kosovo and the Horn of Africa, he said. Like their handlers, the dogs must be worked within reason in harsh environments such as Iraq, said Capt. Greg Jones, commander of the Heidelberg-based 529th Military Police Company.

The dogs, mostly German shepherd and Belgian Malinois breeds, are initially trained at Lackland Air Force Base, Texas, before being specialized in Europe, Jones said.

The handlers are largely autonomous, working in satellite stations without a supervisor, Jones said.

From the looks of it, Gudy likes to be petted. After hopping over numerous obstacles while mixing business and pleasure on the frosted ground, it&#8217;d be hard for an unknowing person to distinguish the big guy from any civilian dog on the street.

But Gudy&#8217;s chop-licking demeanor changed to all business when he was downrange, or when the training is intensified, Collinsworth said.