Military dog, handler use helicopter to train for missions 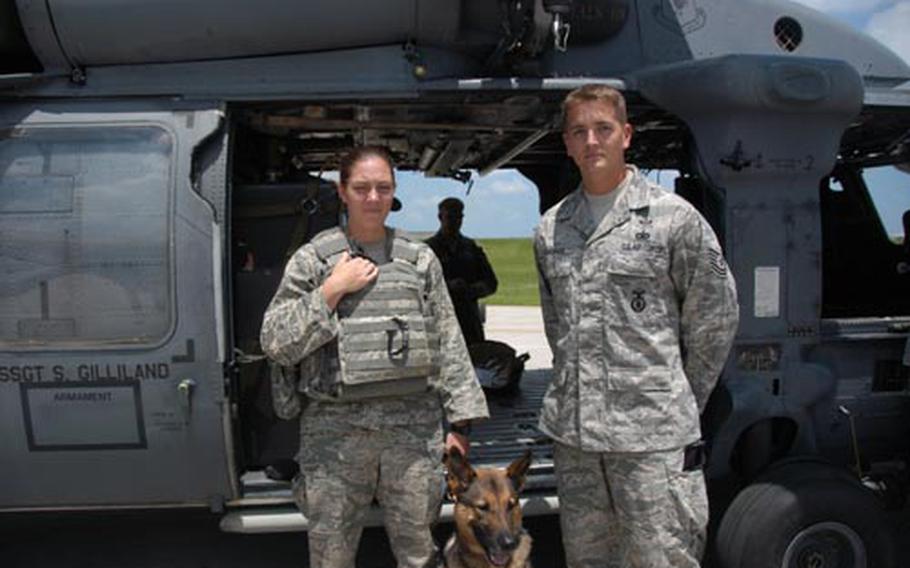 The flight helps Bojar stay sharp and calm around helicopter noise, and not get distracted by flying dust or loud sounds, said his handler, Staff Sgt. Sarah Merklinger.

Spooked military dogs rely on their handlers to soothe them in these stressful situations, she said.

But the 7-year-old German Shepherd is a pro, with several deployments under his collar &#8212; most recently returning from Iraq in March, where he patrolled for weapons and explosives.

Monday&#8217;s flight was led by the 33rd Rescue Squadron, and the first for military dogs at Kadena, officials said.

The training is offered at military bases stateside.

Monday&#8217;s flight is part of ongoing preparation for the 7-year-old Bojar before he heads to Southwest Asia with Merklinger in August.

Bojar and Merklinger have been walking 2 miles daily, with Merklinger in flak vest and helmet, to build endurance.

Merklinger said she plans to push it up to 5 miles over the next couple of weeks.

"The more endurance he&#8217;ll have the better prepared he&#8217;ll be. Our deployments change so rapidly that he has to be able to adapt," she said.

Most military dogs aren&#8217;t used to walking for nine to 10 hours a day, said Bojar&#8217;s former handler, Tech Sgt. Jason Dearinger. Dearinger handled Bojar in Iraq before turning over his leash to Merklinger, and accompanied the pair during Monday&#8217;s flight.

Gunshots, loud noises, and other commotion can cause anxiety for military dogs, and just like soldiers, the strain of war can lead to post-traumatic stress disorder, Dearinger said.

Typically, military dogs are between 18 months to 2 years old, when they start training. An average dog&#8217;s career usually spans between 10 to 12 years, Dearinger said.

The demands of war, however, have trimmed years off their careers, with an average between eight to nine years of duty before retirement or, in sadder cases, euthanasia, he said.