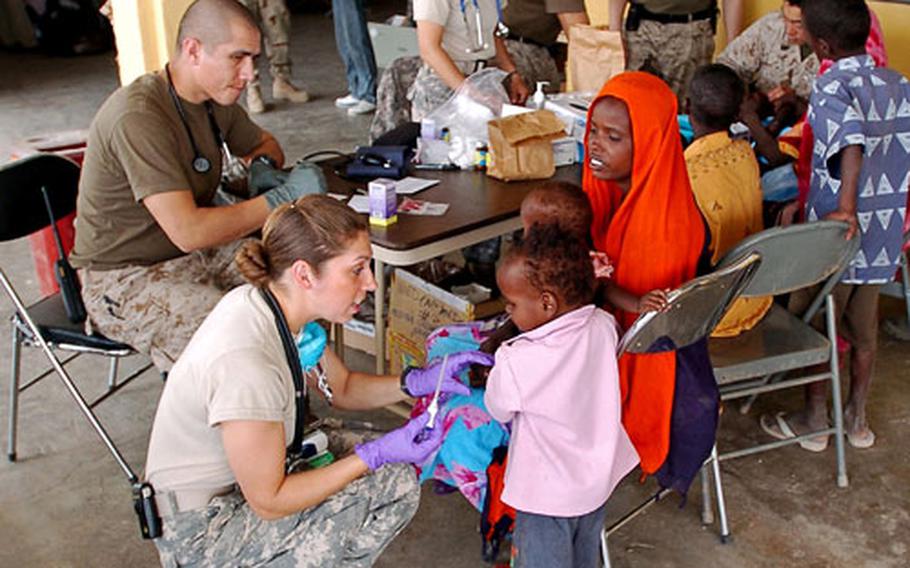 Army Sgt. Catherine Olivarez takes a boy&#39;s temperature during a joint U.S. military medical team visit to the village of Goubetto, Djibouti, in March. As U.S. troops spend more time in Africa, they must be on the lookout for all the diseases on the continent, such as malaria and meningitis. (Courtesy of Richard Doolin / U.S. Navy)

In a continent rife with disease, Africa has perhaps no two more frightening ailments than HIV/AIDS and Ebola.

But those fatal, headline-grabbing diseases are not the main threats to U.S. troops operating in Africa, U.S. military doctors say.

It&#8217;s the &#8220;non-sexy&#8221; illnesses &#8212; malaria, bacterial ailments such as diarrhea and respiratory transmitted diseases such as meningitis &#8212; that pose the greatest risks to American servicemembers in Africa.

With the recent creation of Africa Command, the U.S. military is showing a more focused effort on Africa. Undoubtedly, U.S. troops will continue to deploy to the continent well into the future and risk contracting the bevy of diseases found there.

For years, U.S. soldiers, sailors, airmen and Marines based in Europe have ventured to Africa for exercises and medical missions. In 2003, one civilian and 79 U.S. troops &#8212; mostly Marines &#8212; were treated for malaria contracted during a peacekeeping mission in Liberia. Since that event, there have been no similar, large-scale outbreaks of malaria or other diseases amongst U.S. troops serving in Africa, doctors said.

Malaria is by far the largest health-related threat to the U.S. mission in Africa, but it can be prevented, said Air Force Col. (Dr.) Victor Folarin, command surgeon deputy director at AFRICOM.

&#8220;Initially from an American point of view, we would think that HIV/AIDS would be the biggest threat, but as Dr. Folarin has pointed out, it&#8217;s malaria,&#8221; said Air Force Lt. Col. Lorn Heyne, chief of medical plans and operations at AFRICOM. &#8220;If you do some research, you would find that malaria kills 3 million Africans a year, which is significant, but it&#8217;s also one we can protect the American soldiers against.&#8221;

Malaria is a vector-borne disease transmitted through mosquito bites. Meningitis can be transmitted by person-to-person contact through respiratory secretions. Diarrhea can be caused from bacterial infection brought on by consuming dirty food and water.

Simply put, you can contract diseases in Africa if you eat the wrong food, drink the wrong water, get bitten by the wrong insect or come in contact with the wrong person, said Folarin, who was born and raised in Nigeria. If you don&#8217;t follow the doctor&#8217;s advice, you will get diarrhea, and you&#8217;ll probably get malaria.

Statistics show that in some areas of Africa, 11 to 50 percent of troops will come down with malaria per month if they follow no preventive measures, and 100 percent will get diarrhea if they use unapproved food and water sources, said Army Lt. Col. (Dr.) Steve Lawrence, command veterinarian and force health protection chief at AFRICOM.

To avoid contracting diseases in Africa, military doctors say to take anti-malarial medications as prescribed, wear insecticide-treated uniforms, use mosquito nets, avoid activities during dusk and dawn if possible, eat and drink only from approved sources, and be up-to-date on vaccinations.

If you follow the health-protection measures advised, you should be safe in Africa even though the risk for disease is high, said Air Force Capt. Philipp Lim, chief of public health operations at Ramstein Air Base&#8217;s 435th Air Base Wing.

Lim, who briefs airmen headed to Africa, cited President Bush&#8217;s five-nation trip to the continent in February as evidence that the mission can be accomplished despite the disease threat.