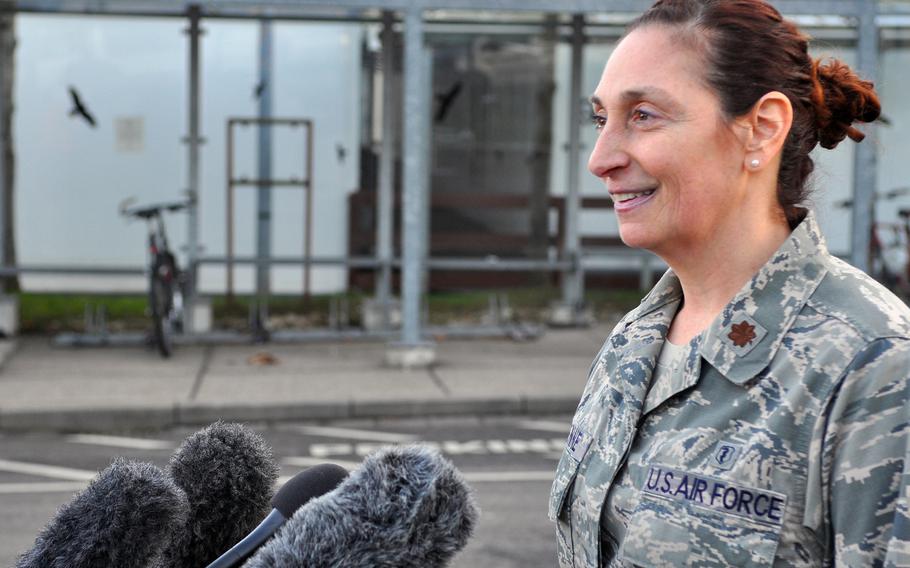 Air Force Dr. (Maj.) Neysa Etienne, a clinical psychologist with the Survival, Evasion, Resistance and Escape team at Landstuhl Regional Medical Center, Germany, speaks to reporters outside the hospital on Thursday, Jan. 21, 2016, about the reintegration process individuals go through after captivity. (Jennifer H. Svan/Stars and Stripes)

Air Force Dr. (Maj.) Neysa Etienne, a clinical psychologist with the Survival, Evasion, Resistance and Escape team at Landstuhl Regional Medical Center, Germany, speaks to reporters outside the hospital on Thursday, Jan. 21, 2016, about the reintegration process individuals go through after captivity. (Jennifer H. Svan/Stars and Stripes) 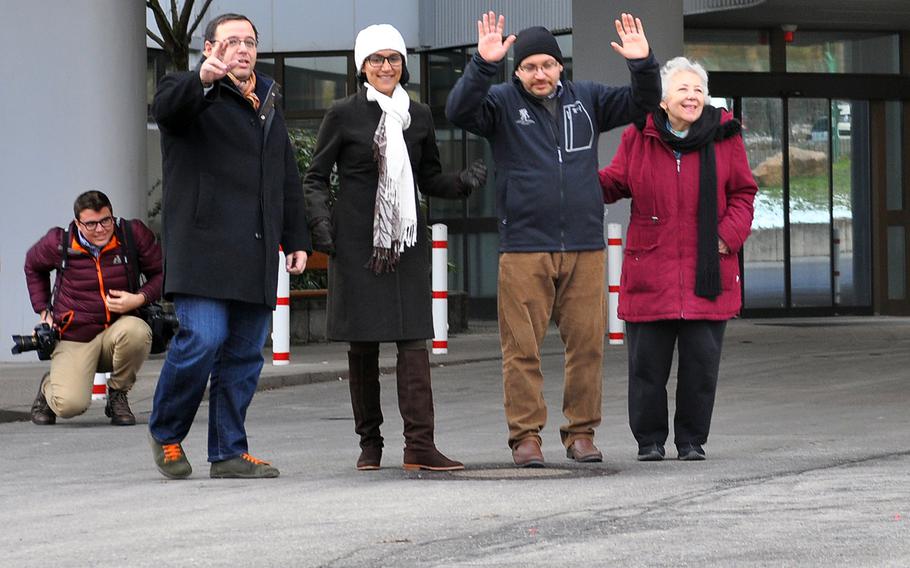 Jason Rezaian waves to reporters outside Landstuhl Regional Medical Center, Germany, on Wednesday, Jan. 20, 2016. He and two others imprisoned by Iran and released over the weekend are being evaluated at the hospital. Rezaian spent 18 months in Iranian prison. He appeared with his brother, Ali Rezaian, his wife, Yeganeh Salehi, and his mother, Mary Rezaian. He smiled but didn't speak when asked questions about how he was doing. (Jennifer H. Svan/Stars and Stripes)

LANDSTUHL REGIONAL MEDICAL CENTER, Germany — For the three Iranian-Americans embracing freedom after years in isolated captivity, helping them re-establish control over their lives is important for recovery, a military doctor who specializes in reintegration said Thursday.

“They did not have any sense of predictability, of what was going to happen on a day-to-day basis, and they had no control over their decision-making,” said Air Force Dr. (Maj.) Neysa Etienne, a clinical psychologist with the Survival, Evasion, Resistance and Escape team. “So when you all of a sudden bring someone into freedom, where the sky’s the limit, it can be very overwhelming, and they can have a difficult time making decisions.”

That’s where families can step in to help returnees with those challenges, Etienne said. For the families, “it comes down to listening to what the individual is asking and desires.”

Etienne spoke to reporters Thursday about the general process and goals of re-entry into society of those who have been held captive.

To protect their privacy, Etienne said she would not speak specifically about the three men — former U.S. Marine Amir Hekmati, 32, of Flint, Mich.; Christian pastor Saeed Abedini, 35, of Boise, Idaho; and Washington Post reporter Jason Rezaian, 39, of Marin County, Calif. The men arrived at the Landstuhl military hospital late Sunday from Iran via Geneva, after being released in a prisoner swap with Iran. A fourth American released in the deal, Nosratollah Khosravi-Roodsari, chose to remain in Iran.

After four days in Germany, Hekmati was scheduled to arrive Thursday afternoon at Flint Bishop’s International Airport, The Associated Press reported, citing the office of U.S. Rep. Dan Kildee, D-Mich. Kildee had been a strong advocate for Hekmati’s release and traveled to Germany to meet him when he arrived at Landstuhl.

It’s not known whether Rezaian and Abedini remain at the hospital. Officials would not disclose their whereabouts, citing patient privacy.

Earlier this week, Hekmati told reporters at Landstuhl that he was well, crediting his Marine training and support from fellow Marines and community members for sustaining him through 4½ years in Tehran’s Evin Prison.

Hekmati said only that his time in prison “wasn’t good,” and that he planned to share more details about it later. A May 5, 2015, post on a website dedicated to securing Hekmati’s freedom — freeamir.org — said that the conditions of his imprisonment had deteriorated in previous months, describing a ward infested with rats.

There were periods where Hekmati was subjected to electricity blackouts, no heat in the winter months, and fed a sparse diet of lentils and rice filled with parasites, the post said. A post in March last year said in the early stages of his imprisonment, Hekmati’s hands and feet were shackled and that he was held in solitary confinement for 17 months, when he was placed in stress positions for extended periods. The post also said he was given electric shock and his feet were whipped with cables.

Etienne said how someone adjusts after enduring captivity is highly individual. It depends on the conditions they suffered, their resiliency and family dynamics pre- and post-imprisonment, among other factors, she said.

LRMC is designated a “Phase 2 transition location” in the reintegration program, she said, where returnees are given a comprehensive medical exam and psychological evaluation and given time “to decompress,” she said.

An individual has “time to reflect on what it is that just happened to them and how well they managed it,” Etienne said.

The medical team wants to ensure a patient is mentally stable before sending him home, she said. Do they know who they are? Do they know what year it is? Are they able to converse and tolerate stimuli?

“We look for some markers that … their health and welfare is at a better mile marker than it was when they came to us,” she said.

Of the three men who were released, Etienne said, “they were able to gain something from the process.”

After leaving LRMC, Phase 3 of the reintegration process begins. They may reunite with more family members, receive additional medical care as needed and even have the opportunity to tell their story.

As civilians, the men’s time in the program is voluntary. Military members are required by the Defense Department to participate in reintegration, she said. Civilians have the option to stay in the process or elect out of it.

While it may seem it’s harder to convince civilians anxious to return home to stay, Etienne said that’s usually not the case.

“Once we can clearly articulate what we’re offering and the potential to reduce longer term psychological impact, we find people usually want to stay.”