Military delivering supplies as US promises more aid to Nepal A woman walks past earthquake-damaged buildings in Bhaktapur, Nepal, on Tuesday, May 5, 2015. (Seth Robson/Stars and Stripes) 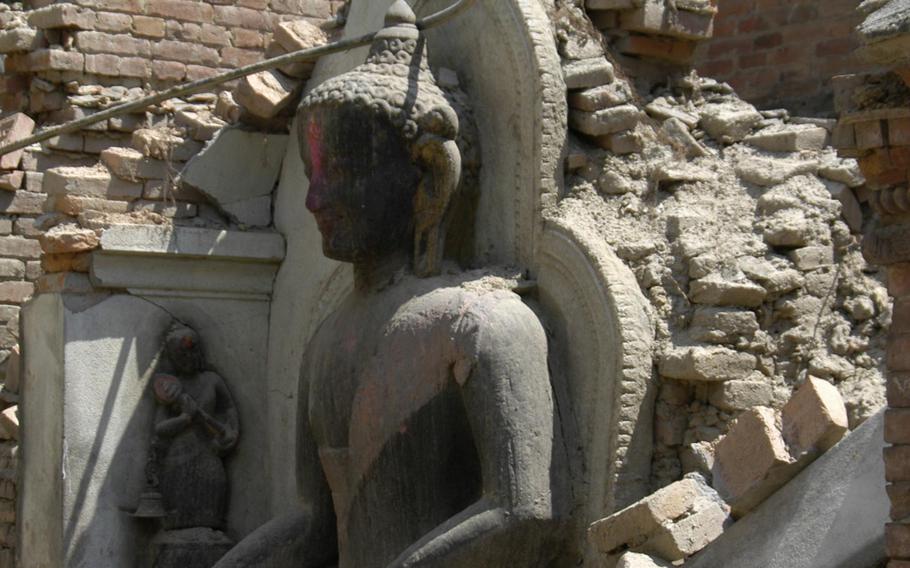 A statue of Buddha sits intact among earthquake debris in Bhaktapur, Nepal, Tuesday, May 5, 2015. (Seth Robson/Stars and Stripes) 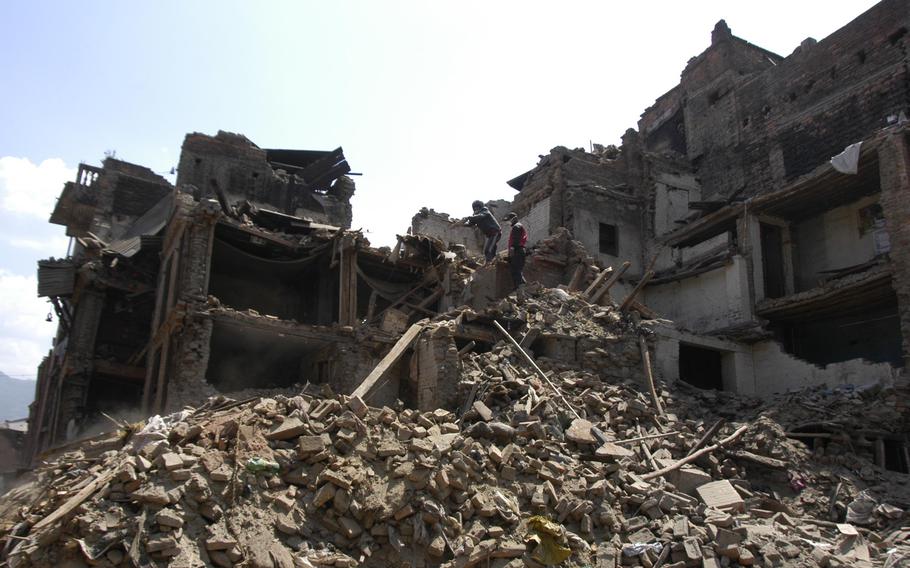 An earthquake survivors stands amid rubble in Bhaktapur, Nepal, Tuesday, May 5, 2015. (Seth Robson/Stars and Stripes) Woodwork from the 14th century decorates a building in Bhaktapur, Nepal, Tuesday, May 5, 2015. (Seth Robson/Stars and Stripes) 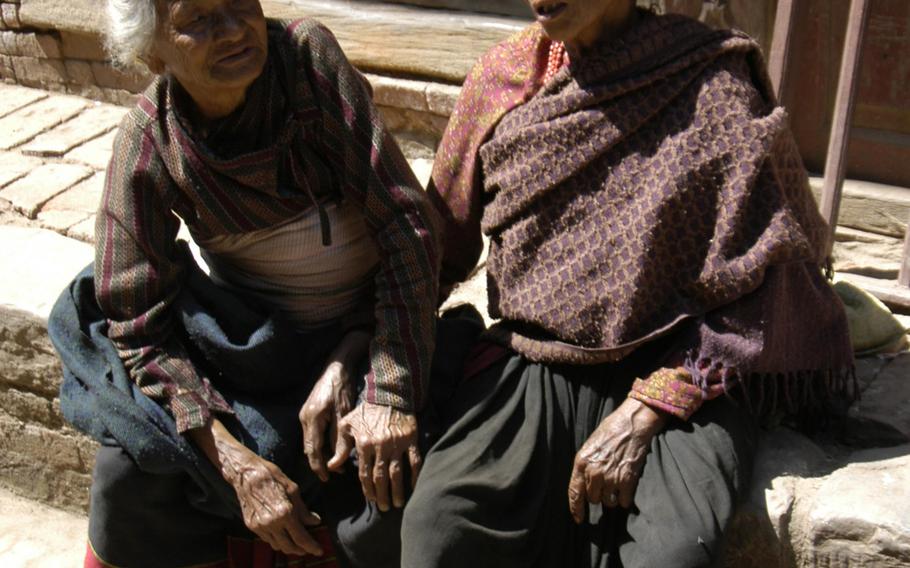 Earthquake survivors sit in the street in Bhaktapur, Nepal, on May 2, 2015. (Seth Robson/Stars and Stripes) 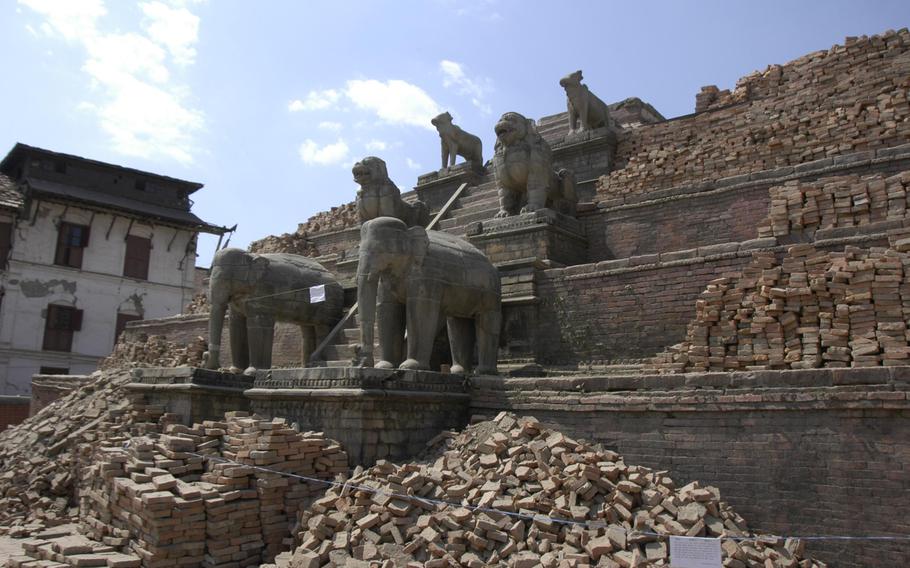 An earthquake-damaged temple in Bhaktapur, Nepal, Tuesday, May 5, 2015. (Seth Robson/Stars and Stripes)

KATHMANDU, Nepal — Marine Corps MV-22 Ospreys soared over Nepal on Tuesday as the U.S. announced $11 million more in aid for the devastated nation.

The Himalayan country is still digging out from the magnitude-7.9 earthquake that rocked the countryside on April 25. The death toll has reached 7,500.

Marine Col. John Armellino, deputy commander of the U.S. military task force in Nepal, said the tilt-rotor Ospreys can reach most areas they are needed but added: “We can’t execute our mission until the relief supplies come in. You need to execute that portion of the mission first.”

The U.S. is flying in hygiene kits but sourcing other aid locally. Air Force personnel will soon start to help with logistics at Kathmandu’s airport to improve its efficiency, officials said.

One of the Osprey pilots in Nepal — Marine Maj. Arturo Guzman — said the aircraft flew Monday and Tuesday, spending five hours in the sky and moving 2 tons of gear and some USAID representatives.

The mission is the first test of some of the aircraft’s capabilities, he said.

“The biggest challenge is the altitude,” he said. “We have half the (rotor) blade size of any other helicopter in the inventory, but we carry three times the weight.”

In plane mode, the Osprey can cruise at 25,000 feet — lower than some of Nepal’s mountains, including Mount Everest, the world’s tallest. In helicopter mode the aircraft can hover at 12,000 feet, an altitude at which it can carry only a couple of passengers, Guzman said.

On the ground in Bhaktapur, a city not far from Kathmandu, locals face years of work to repair or replace their damaged homes. The city center, which includes buildings dating to the 14th century, was a popular tourist spot before the disaster. Ram Dahl, 40, a guide there, said his home was destroyed but his family survived and is living in tents.

Dahl has been showing rescue workers around the temple and ruins since the disaster, but he’s worried that tourists won’t come back.

Six hundred people in the city of 100,000 died in the earthquake. Funeral pyres have sent smoke wafting out of a cremation platform beside the river for days, he said.

Many of the Bhaktapur’s ancient statues and temples have been damaged, but the tallest — the five-story Nyatapola Temple, dedicated to the goddess of prosperity Siddhi Laksmi — survived intact. To reach its base visitors must climb a set of steps past statues of wrestlers, elephants, lions, griffins and the goddesses Singhini and Baghini. Each creature is supposed to be 10 times stronger than the one below it, Dahl said.

Nearby a giant golden chariot, brought out for the Hindu New Year celebrations on April 15, is still parked in the street.

Another building to survive the earthquake was the Dattatreya Temple, which dates back to the 15th century. Dedicated to Hinduism’s Supreme Triumvirate — Brahma, Vishnu and Shiva — it was built from a single tree 700 years ago, Dahl said.

The worst damage in Bhaktapur is in the streets surrounding the city center, where entire neighborhoods are now massive piles of bricks and dust.

Another who lost his home in the city is Kul-Budez Kustra, 48. His mother, who was inside the family home, was crushed to death, but the rest of the family survived. Now Kustra, his wife, children and sister are camped out on the edge of town.

They split their time between farming their land and removing bricks from the massive pile where their house used to stand. The family has enough to eat and drink, Kustra said, but added, “We haven’t had any help from the government.”