Military couple puts their dog in a book, for a cause 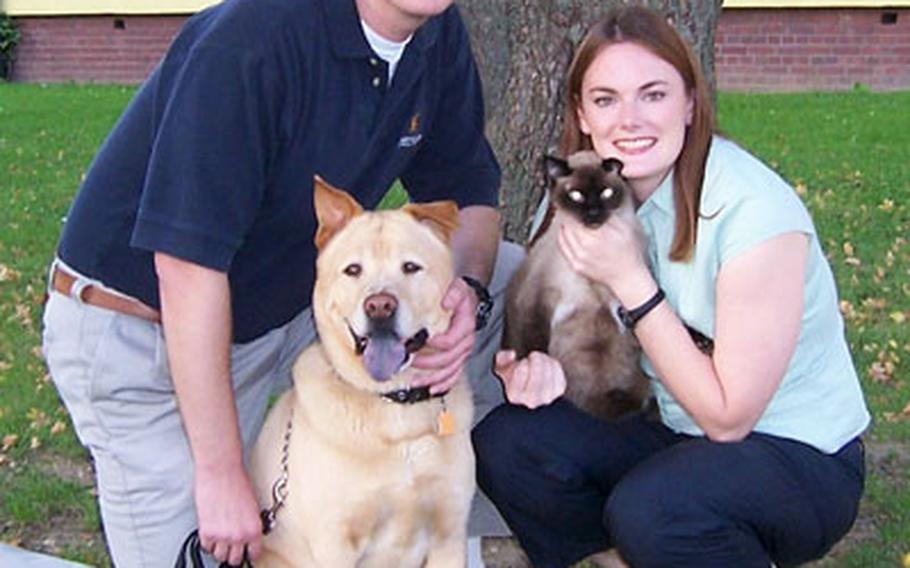 Bascom and Tracy Bradshaw, shown with Izzy and Dingo, are writing a children&#39;s book called "Dingo the Dog." The Bradshaws say they hope the book will teach children about pet adoption. (Photo courtesy of Tracy Bradshaw)

He was delivering pizzas at one point. She was widely expected to remain unmarried, and to have a lot of cats.

Now he&#8217;s an officer, a gentleman and a doctor. She&#8217;s a physical therapist, married to him for five years &#8212; and with two cats. Based on their own happy turn of events, is it any wonder that Maj. Bascom and Tracy Bradshaw have big ambitions for their dog, Dingo?

Just a few short years ago, Dingo was on death row in Texas. He was saved by Tracy, who&#8217;d become attached to him at the shelter where she worked. He was scheduled to be put down, and Tracy brought him to the couple&#8217;s apartment in Galveston.

But because Dingo, a chow mix, is such a looker, often inspiring people to ask to be photographed with him, and because he&#8217;s so sweet-natured and full of charming quirks, the Bradshaws were inspired to make him the lead character in a children&#8217;s book. This for a dog that already has his own MySpace page, a prototype of a stuffed animal in his likeness and numerous Dingo coffee mugs, T-shirts and shopping bags available on the Internet.

The book &#8212; a fictional story about a real dog &#8212; will focus on Dingo&#8217;s travels and travails, along with a cranky Siamese cat and a little girl named Cricket. The trio&#8217;s story proceeds as the three meet homeless animals and work to find them homes. The book also has two human characters based on the couple, called Sophie and Woody.

Bascom, who hadn&#8217;t picked up a sketch pad or pencil for years, is doing the illustrations. He said it takes an average of four hours for each drawing.

But the inspiration came from Tracy, who started collecting and caring for cats in college. Her mother was equally kind to cats and now has a sterile, 30-cat colony frequenting her backyard.

The couple, who started on the Dingo project in June, plan to self-publish the book in December, a few months after an upcoming move to Qatar, where, Tracy has heard, some British ex-pats have a shelter for cats.

For more information, go to www.dingothedog.com.