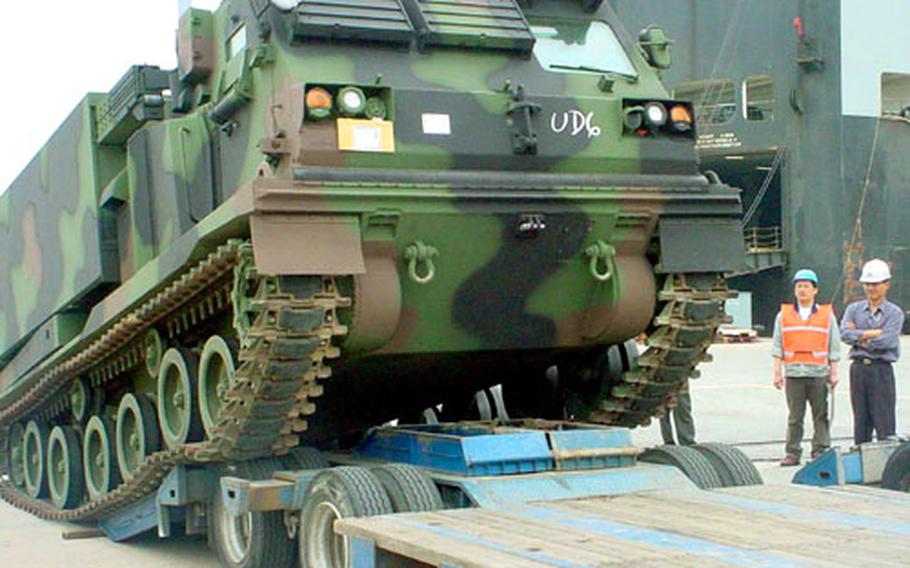 A mobile rocket launcher slated for delivery to the U.S. Army moves onto a flatbed trailer at Army&#39;s Pier 8 in Pusan. (Photo courtesy U.S. Army)

TAEGU, South Korea &#8212; The sun was bright over Pusan Harbor on Monday as Ron Day stepped onto the pier to watch stevedores unload a shipment of mobile rocket launchers for the U.S. Army in South Korea.

Day is chief of terminal operations at Pier 8, a U.S. military installation where the Army&#8217;s 837th Transportation Battalion (Terminal) tracks all seagoing cargo the U.S. military moves in and out of South Korea.

Much of the military&#8217;s seagoing cargo &#8212; everything from tanks and helicopters, lumber and other military hardware and supplies, moves through Pier 8. The rest, like troops&#8217; cars and commissary groceries, comes through various commercial ports.

But for the first time, next month the Army will open the pier to limited commercial container shippers whose cargo has nothing to do with the military.

&#8220;Since the port of Pusan is the third-largest container port in the world, they needed the space,&#8221; Day said of the companies.

So Pusan&#8217;s Ministry of Maritime Affairs and Fisheries inked a one-year, renewable agreement with the U.S. Army that&#8217;ll let regular commercial ships bring cargo in and out of Pier 8. The pier is South Korean property, but the U.S. Army has &#8220;exclusive use&#8221; under the U.S-South Korea status of forces agreement, said Day.

&#8220;They want to make the maximum use of the available facilities here in the port of Pusan,&#8221; said Army Lt. Col. Jim Brundage, the 837th Transportation Battalion&#8217;s commanding officer.

It won&#8217;t interfere with military shipping or training; the agreement lets the Army order an immediate halt to the commercial operations if warranted.

&#8220;At any time I can stop the commercial operation &#8230; and I don&#8217;t foresee that happening because they have been very, very cooperative in making the arrangements,&#8221; Brundage said.

Moreover, the Army controls when it&#8217;ll allow a commercial ship to tie up at Pier 8.

&#8220;We&#8217;re not going to have containers set down on Pier 8, because we always have to be ready to perform the military operations,&#8221; said Brundage. &#8220;So the containers will be lifted onto trucks and off the pier and taken to container yards throughout the city.

Personnel coming to Pier 8 in connection with the commercial shipping will be screened, and the pier&#8217;s purely military sections would be off-limits.

Would-be terrorists wanting to plant a bomb in one of the commercial containers coming through Pier 8 would face at least &#8220;two key things,&#8221; said Brundage.

Under the arrangement, Pier 8 will be a way point for containers going from South Korea to other countries around the Pacific Rim, or arriving from other countries, said Brundage.

The Army makes no money on the shipping traffic, he said. Those transactions are between commercial shippers and the International Stevedore Company, which works for the Army under contract at Pier 8.

The added traffic will mean higher monthly incomes for the firm&#8217;s dock workers, whose paychecks depend partly on the amount and type of cargo they handle, Day said.