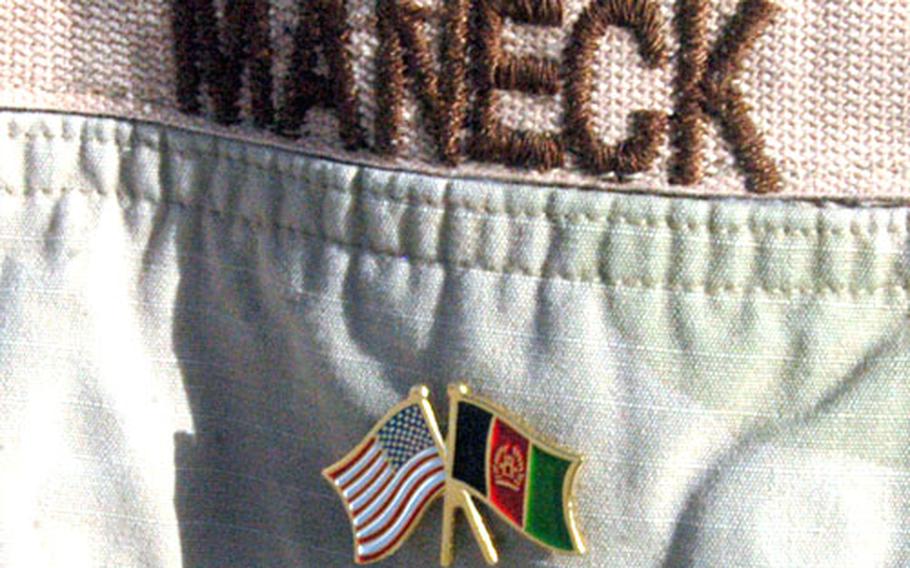 KANDAHAR, Afghanistan &#8212; Military officials say that troops have a new weapon in their fight to win the hearts and minds of the Afghan people &#8212; a small lapel pin with the crossed flags of the United States and Afghanistan.

And it&#8217;s not just servicemembers who will be wearing these new arms; they&#8217;re also mandatory for all civilians working under Combined Forces Command-Afghanistan.

The CFC-A commander, Lt. Gen. Karl Eikenberry, signed a policy memorandum on June 22 ordering the wearing of the pins. Since then, the little flags have slowly been showing up on the right pockets of military members&#8217; desert combat uniform tops as the pins are distributed through the supply chain.

Col. Jim Yonts, CFC-A&#8217;s top public affairs officer, said the pins are designed to show solidarity with the Afghan people and to also symbolize the two countries&#8217; ties that were brought about because of the terrorist attacks on Sept. 11, 2001.

And some of those other coalition forces also have started to wear similar pins, Yonts said.

At Kandahar Airfield, only a small percentage of U.S. troops had the pins as of late August. So few, that some soldiers hadn&#8217;t even heard of the mandatory policy. But nearly everyone agreed that the symbolic gesture was a good idea.

Rodriguez learned of the policy only recently, after reading a copy of Eikenberry&#8217;s memorandum provided by Stars and Stripes. Some soldiers, however, questioned if the pins will really have such a positive impact on the Afghan population.

And if they could see Torres and the other soldiers of his battalion, the pin would be covered by body armor as they hunt for roadside bombs.

The flag pins, according to Eikenberry&#8217;s memorandum, &#8220;will not be worn when conducting tactical operations.&#8221; Soldiers leaving bases are required to wear body armor, meaning that even if they&#8217;re wearing the pins, they won&#8217;t be seen by the Afghan public.

Those military and civilians who spend most of their time working on the bases &#8212; and consequently will wear the pins the most &#8212; also questioned how the general Afghan population will know about the American forces&#8217; symbolic gesture.

But Moore&#8217;s e-mail said that there are many people who interact with Afghans.

&#8220;United States Military personnel, Department of Defense contractors and civilian personnel work daily with local civilians on and off base to fulfill mission requirements or coordinated meetings,&#8221; she wrote.

Though none of the soldiers Stars and Stripes spoke to said they mind wearing the pins, some joked that the idea reminded them of scenes from two movies: the &#8220;pledge pin&#8221; scene from &#8220;Animal House&#8221; or a scene in &#8220;Office Space&#8221; in which actress Jennifer Aniston is criticized by her manager for not wearing enough pins, called &#8220;flair&#8221; in the film, on her waitress uniform.

But Yonts said that the soldiers who understand the purpose behind the pins &#8212; that of increasing solidarity with the Afghan people &#8212; will come to appreciate the gesture.

Who wears the pin, and when

If you&#8217;re U.S. military, a Department of Defense contractor or civilian assigned under Combined Forces Command-Afghanistan, you&#8217;re supposed to be wearing a small pin with crossed U.S. and Afghan flags on it.

A memorandum signed by CFC-A&#8217;s commander, Lt. Gen. Karl Eikenberry, on June 22 mandates the pin for those assigned, attached or on temporary duty to Afghanistan.

So, if you pick up a &#8220;Green Beans&#8221; coffee first thing in the morning, the barrista should be wearing a pin. If you visit the Morale, Welfare and Recreation tent later that evening and check out an Xbox, the desk clerk should be wearing one, too.

For military members, the memorandum states that the pin be worn &#8220;centered on their right Desert Combat Uniform shirt pocket flap.&#8221;

Contractors and other civilians will wear it on their left lapel or collar.

Many countries with troops in Afghanistan are adopting similar policies, said the CFC-A public affairs officer, Col. Jim Yonts. They will also wear their pins on their right uniform pocket.

The memo states that the pin will not be worn when conducting &#8220;tactical operations,&#8221; which implies anytime soldiers leave the protected bases. Soldiers operating off the bases are required to wear body armor, which covers the DCU tops.

The memo also specifies wear only with DCUs, so soldiers in physical training uniforms or, say, coveralls, should not be required to wear the pins. It also states that commanders can use their discretion on the flag&#8217;s wear for &#8220;sensitive events.&#8221;

The flag pins are slowly being distributed through the supply system and will be issued to all military and civilian personnel. Yonts said that coalition authorities understand that the pins haven&#8217;t made it out to all troops yet.

Yonts also said that officials understand that wearing of the pins is going to take some getting used to: He has already sent a uniform to the laundry with a pin still attached.