Military chefs train with one of the best 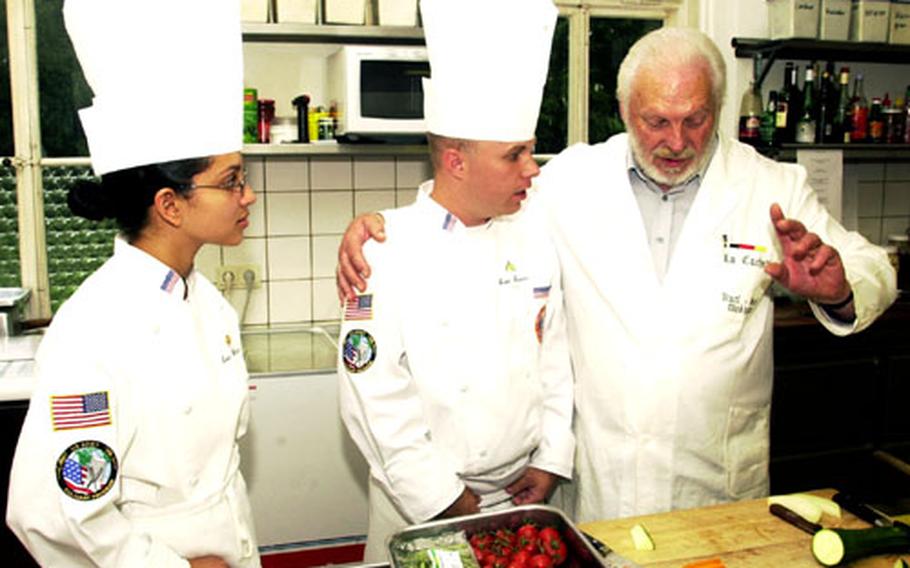 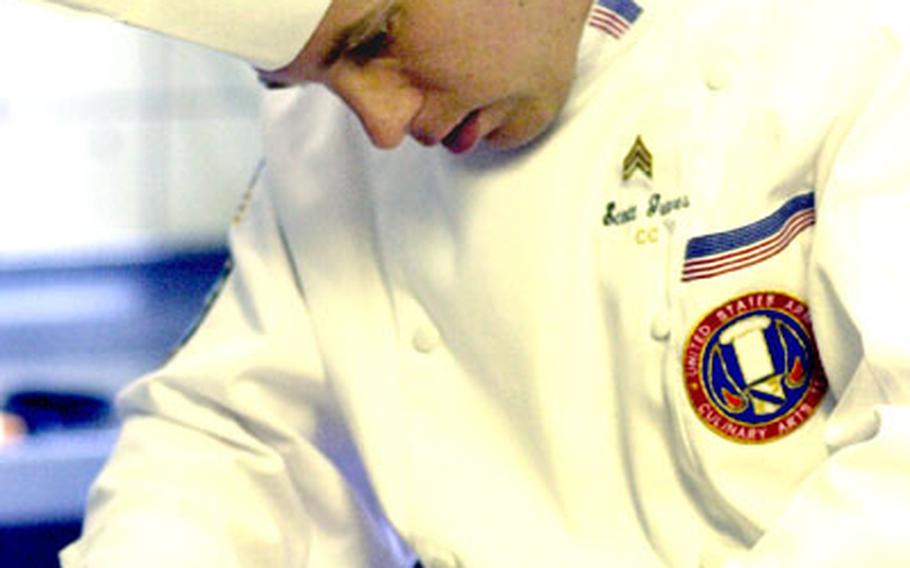 Sgt. Scott Graves needs the hands of a surgeon and the concentration of a gem cutter to turn red mullet into tiny fillets, part of a seven-course meal at La Cachette. (Terry Boyd / S&S)

ABENTHEUER, Germany &#8212; Before noon, Spc. Luisa Conception adjusts a bandage covering a nick on her left pinky and makes a mental note that the cutlery is sharp enough to lop off a digit.

Nearby in the kitchen, Sgt. Scott Graves is taking the measure of chef Nikolaj Dickheiwer&#8217;s tiny tourn&#233;-cut carrots, which must have seven perfect sides &#8212; not six, not eight &#8212; before Graves can tackle cutting chunks of korabe into quarter moons.

By 1 p.m., Graves and Conception have only about 10 more hours of nonstop work on their second day in the kitchen of the Dickheiwer family&#8217;s La Cachette restaurant, where they&#8217;re training for a week under Karl-Heinz Dickheiwer, one of Germany&#8217;s most renowned chefs.

Normally, the soldiers would get to take a lunch break, but because La Cachette&#8217;s masters have stopped so often to discuss technique and recipes with Graves and Conception, there&#8217;s no time.

A lavish seven-course meal must come together by 6 p.m.

Believe it or not, 12-hour days in La Cachette&#8217;s kitchen starting Tuesday and ending Saturday are the soldiers&#8217; reward for being two of the best chefs in the U.S. Army.

Graves, a chef at the Any Mission Diner &#8212; formerly the On Point Diner &#8212; at Campbell Barracks in Heidelberg, won senior chef of the year at the 29th annual U.S. Army Culinary Arts Competition. Conception, from the 1-25th Military Intelligence Battalion, Hawaii, won the junior chef title.

Their reward is a week at La Cachette, even bunking down at the restaurant complex. Think of it as a fine-dining boot camp. If you have to go to boot camp, La Cachette (&#8220;The Hiding Place&#8221;) is the way to go &#8212; an elegant restaurant in an 18th-century hunting lodge amid the flawless hills, pastures and forests about 18 miles west of H.D. Smith Barracks in Baumholder.

And if this is boot camp, think of Karl-Heinz Dickheiwer, a master chef, and son Nikolaj as low-key drill sergeants, pushing Graves and Conception to achieve something like culinary perfection.

At stake is La Cachette&#8217;s reputation. It is not an inexpensive proposition to eat the food Graves and Conception are helping prepare; a seven-course meal runs about 60 euros per person, not including wine.

On the second day, there is little doubt both soldiers can hack it as they help the Dickheiwers create a seven-course meal that will include mousse made from smoked trout, veal medallions stuffed with goose liver p&#226;t&#233;, with everything topped off by a Grand Marnier parfait.

Graves, 30, of Redding, Calif., is practically an Army legend, winning numerous cooking competitions as part of the 12-member U.S. Army Culinary Arts Team. He&#8217;s already worked with the Dickheiwers as 2002 Army junior chef of the year. He&#8217;s been cooking since he was a kid, and even ran restaurants before joining the Army four years ago. Though anyone from E-1 to O-10 can eat at the Any Mission Diner, Graves agrees it&#8217;s probably not a coincidence that he works at the restaurant where top U.S Army Europe brass dine.

Conception, 21, did not grow up cooking in Michigan. Joining as a 92 Gulf, or cook, she remembers how important food was at her real boot camp, &#8220;but I was thinking about filling my stomach.&#8221;

Now, she&#8217;s becoming a connoisseur, getting international experience most chefs would kill for. Karl-Heinz and Nikolaj are showing her their secrets &#8212; refined over decades of cooking &#8212; for combining ingredients for the most flavor and impact. At one point, Karl-Heinz takes Conception aside, cups the savory vapors rising off the huge stove, then breathes deeply: &#8220;The smell is the test! If the fragrance is good, that&#8217;s how the food is going to taste!&#8221;

Even Graves seems impressed at how much is going on, and how many dishes are coming together simultaneously, with Karl-Heinz and Nikolaj somehow remembering exactly what is in each simmering pot, and where six or eight dishes stand in the complex preparation process.

Despite the rarified atmosphere, Graves and Conception are adamant that they will take away essential skills that will translate into better food for the soldiers they serve. There are &#8212; in the final analysis &#8212; skills that every cook can master, Graves said.

The last time he was here, Graves recalls on Monday before work starts, Karl-Heinz Dickheiwer wouldn&#8217;t let the Army cooks do anything but concentrate on food preparation. &#8220;He didn&#8217;t even let us do dishes.&#8221;