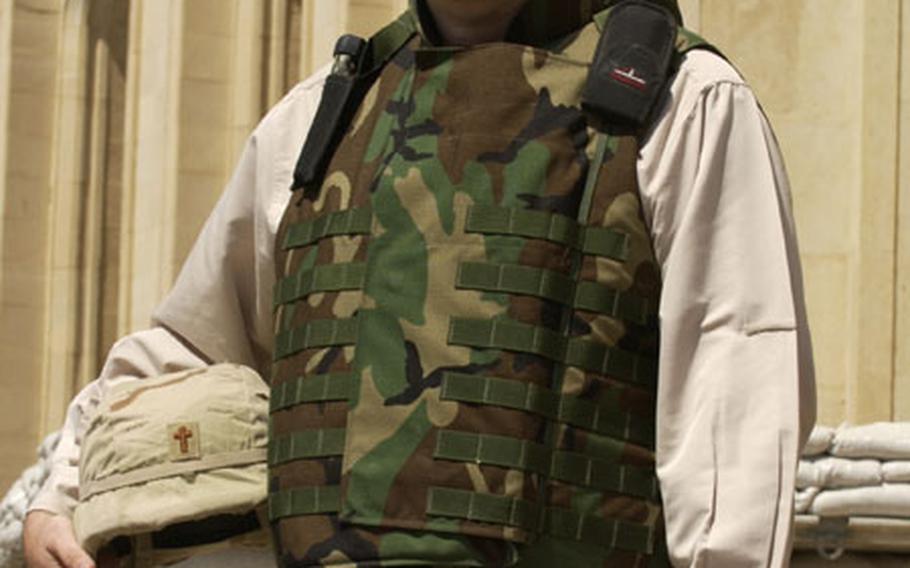 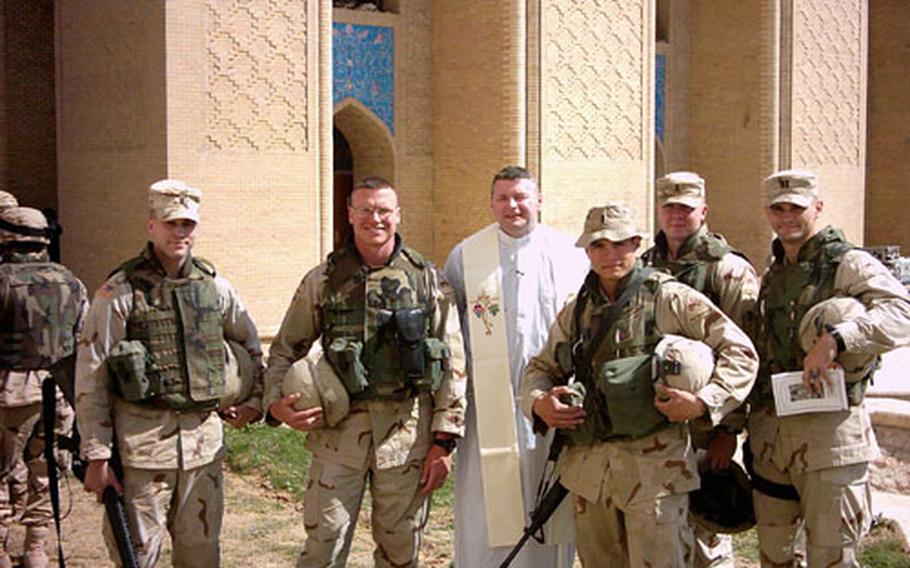 Chaplain (Capt.) Ken Beale (center) says troops apologize to him because he goes into harm&#39;s way to deliver Mass. With a shortage of Catholic chaplains, he performs Mass on Wednesdays, Thursdays, Fridays and Saturdays. (Courtesy of U.S. Air Force) Before the body bags with their precious contents are flown from Iraq, chaplains serving at the airport in Baghdad approach the aircraft for a small, brief and unobtrusive service.

Yerkes, wing chaplain for the 100th Air Refueling Wing at RAF Mildenhall, England, and now deployed to Iraq, said those services have been frequent lately. In his first two weeks in Iraq, he took part in one or two such events a day, he said in a telephone interview.

&#8220;It is a holy moment. Not just another piece of cargo,&#8221; he said. The families of the fallen, he said, perhaps will feel better because of the few words and the prayers said for their loved ones.

Across town at the headquarters of the Coalition Provisional Authority, Chaplain (Capt.) Ken Beale frequently leaves the Green Zone to minister to soldiers. Although the Green Zone is far from safe, the streets of Baghdad hold another level of danger.

The troops want him there, he said. They want a chaplain to come to them, to talk to them and minister to them. With a shortage of Catholic chaplains, he performs Mass on Wednesdays, Thursdays, Fridays and Saturdays.

Whether in a war zone such as Iraq or the tranquil setting of a base in America or England, a chaplain&#8217;s duty is the same &#8212; to minister to the needs of a military member or anyone else.

But in Iraq, the need often is more immediate and the risk is greater. Yerkes recently spoke with a soldier who had lost his best friend. Beale worked down the hall from the Iraqi oil minister who was killed recently in an ambush.

In Iraq, there is no place safe from mortar rounds or rocket attacks or car bombs. Beale&#8217;s current home &#8212; the Green Zone &#8212; is a target nearly daily for insurgent attacks. A mortar round landed quite close to him recently. Others land with great frequency on the compound.

The Air Force may have sent them there, but an even higher power called them to this duty, they said.

Within the Green Zone, Beale&#8217;s ministry includes many State Department workers and others who are trying daily to put Iraq back together as a country. He has helped Jews and Muslims and even Buddhists and Mormons.

Both men talk about the dedication of their flocks. Beale said his work gives him &#8220;a great civic lesson&#8221; as he watches the effort each day to put the nation back on its own feet.

Yerkes said he is amazed at the courage shown by the young troops, many of them not much older than his teenaged son. He is struck, he said, by the thought that the troops on guard at the base or on patrol in the city are willing to die to protect him.

Despite the many risks, both go about their business, sharing the word of God with those who want to hear it.

Shortly before Yerkes was interviewed, the base had been under an alert following a mortar attack.