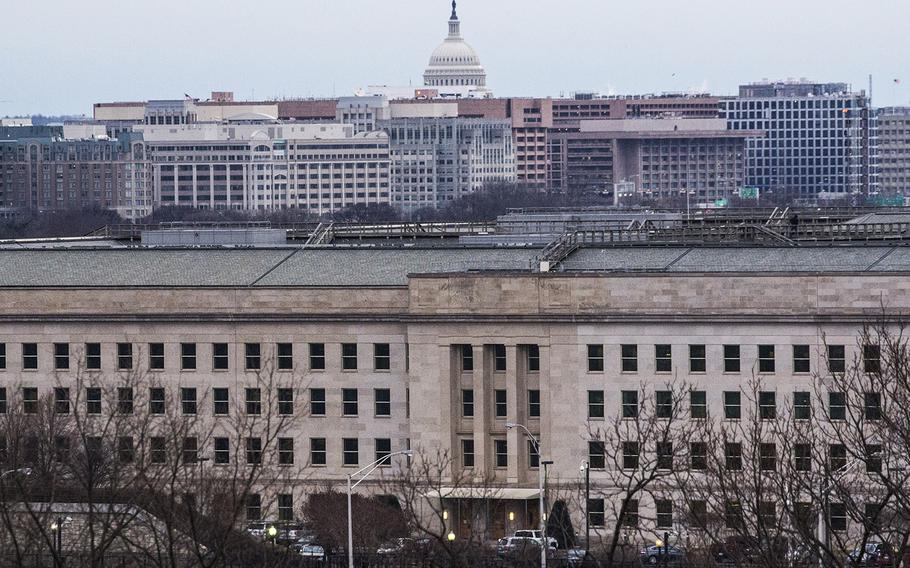 Buy Photo
The Pentagon and the U.S. Capitol, in January, 2018. U.S. military officials have sought to ward off congressional efforts to address child-on-child sexual assaults on bases, even as they disclose that the problem is larger than previously acknowledged. (Stars and Stripes)

WASHINGTON – A more than $650 billion military spending plan was key in winning over President Trump’s support for an overall budget deal mere hours after he threatened to veto it and force a potential government shutdown.

Shortly before 8 a.m. Friday, hours after the House and Senate had passed a $1.3 trillion omnibus budget that included a more than $60 billion funding increase for the Pentagon, Trump threatened to veto the spending plan because it didn’t address immigration issues and included insufficient funding for a border wall.

But by Friday afternoon, Trump, flanked by Defense Secretary Jim Mattis and other Cabinet secretaries, announced he had signed the budget reluctantly. Trump said he felt he had to because of the significant gains provided for the military in the plan.

“I looked very seriously at the veto. I was thinking about doing the veto,” Trump said after a hastily planned news briefing at the White House. “But because of the incredible gains that we’ve been able to make for the military, that overrode any of our thinking.”

In his comments, Trump lauded the plan’s aim to usher through a significant hike to the Pentagon’s budget, which will now fully fund a 2.4 percent pay raise for servicemembers and pay for new ships, aircrafts and submarines, in addition to directing new spending on missile defense.

The defense budget closely follows the 2018 National Defense Authorization Act, or NDAA, which was passed last year and authorizes spending but doesn’t actually appropriate the money.

The budget will reverse “many years of decline and unpredictable funding and together we are going to make our military stronger than ever,” Mattis said. “We in the military are humbled and grateful to the American people for their sacrifices. On behalf of this funding, now it’s our responsibility to spend every dollar wisely in order to keep the trust and the confidence of the American people and the Congress.”

Though Trump took aim at Democrats over the plan, defense spending has seen significant cuts in recent years in large part to the Budget Control Act of 2011, which imposed budget caps. For example, the military budget would have been capped at $549 billion this year had Congress not reached a 2-year deal to lift those limits.

The budget also directs for $11.5 billion in spending for the Missile Defense Agency, $1.6 billion for 30 Apache helicopters, $1.1 billion for 56 Black Hawk helicopters and $34.4 billion in defense health and military family programs.

Trump highlighted many of these gains in his reluctance to sign the overall bill.

Molly Reynolds, a governance studies fellow at the liberal-leaning Brookings Institution, a Washington think tank, suggests the defense spending, along with a threat of a government shutdown, spurred the president to sign the plan.

By Friday, much of Congress had already left to begin their two-week recess. The Senate had passed the plan by 1 a.m. Friday, with House members approving it earlier Thursday afternoon.

“The big defense spending increases are likely part of what got Trump to sign, rather than veto, the bill,” Reynolds said. “My hunch is that the fact that he would have been unequivocally blamed for a government shutdown was also part of the story.”

Lauren Fish, a defense strategies research associate for the Center for a New American Security, another Washington think tank, said it was clear that the defense spending efforts helped win Trump’s approval.

But challenges lie ahead for future funding gains for the military, Fish warned.

“After years of severe defense spending cuts since the Budget Control Act passed, this influx of cash is much-needed, and that realization drove The Hill to increase spending, albeit with matching spending for nondefense,” Fish said. “Together, that results in a huge spending bill that deficit hawks oppose and sets up an unstable future. While a great story for today, ...We have no hope that the budgeting cycle for the next couple of years will be any easier than this year has been.”

With Friday’s plan, the Pentagon will finally get appropriations tied to the 2018 fiscal year, which began Oct. 1. Since that time, the government, along with the military, has been operating off temporary funding measures. A government shutdown deadline loomed late Friday if a deal was not reached.

The plan fully funds a 2.4 percent pay raise, which was initiated Jan. 1 following a presidential executive order in December. However, the Pentagon has been forced to use money for future pay to cover current pay raises until a permanent budget plan was approved, said Andrew Sherbo, a University of Denver finance professor who has tracked government and defense budget issues.

With Friday’s plan, “the military will see no difference” from their paychecks, he said. “When the money does arrive via passage of the [budget], it pays back the borrowed money.”