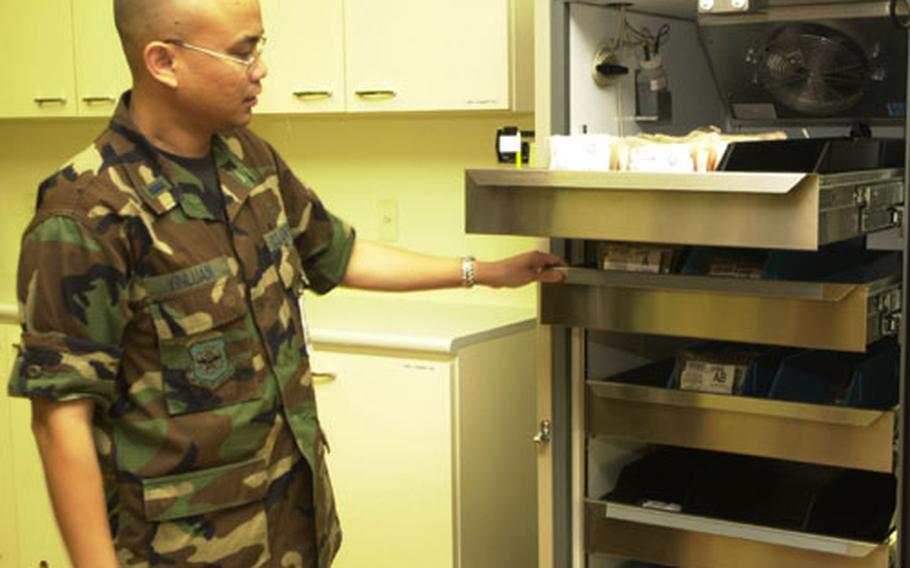 Air Force 1st Lt. Jerome Vinluan, the assistant director of the Armed Services Blood Bank Center, displays the center&#39;s stock of units of blood. As of Friday, the center had 102 units on hand. They&#39;re supposed to always stock at least 150. (Fred Zimmerman / S&S)

Any servicemember who steps foot inside Iraq will be disqualified from giving blood anywhere from one to three years, Becky Leavitt, a blood-donor recruiter, said Friday.

Depending on where servicemember spent time, they can be banned because of the possibility of exposure to leishmaniasis or malaria, she said.

Leishmaniasis is a parasitic disease transmitted by the bite of sand flies and can either be in a skin or internal organ form, according to the Centers for Disease Control and Prevention Web site (www.cdc.gov).

The skin form is characterized by sores that develop anywhere from weeks to months after a person is bitten. If untreated, the sores can last years.

The disease&#8217;s internal organ form shows symptoms such as fever, weight loss, enlargement of the spleen and liver, and anemia. Symptoms can take months or years to develop after a person is infected. If untreated, it&#8217;s typically fatal.

Leavitt said the restrictions are really hurting the center, which supplies the Pacific region. More than 90 percent of their donors are active-duty military.

The center has never been overly concerned about numbers because it&#8217;s always had the potential to bring them up when servicemembers return from deployments. But now, it&#8217;s the potential for a shortage that worries officials because the number of qualified donors is dwindling.

If the blood bank can&#8217;t find more donors, it may have to rely on a reserve back in the United States. But that could impact GIs who are in harm&#8217;s way.

The center can barely keep up with demand, she said.

The center has a donation quota of 300 units each month, but even if that figure is met, it doesn&#8217;t mean a surplus.

Another reason the blood bank can&#8217;t keep up, Leavitt added, is because of unusually high demand.

Vinluan said anyone stationed in Europe between 1980 and 1996 are barred from donating indefinitely because of mad cow disease. That restriction alone kept 25 percent of donors from ever giving again. Those who visited a country on the SARS list, or even went through an airport there, can&#8217;t donate blood for 28 days.

&#8220;The [Food and Drug Administration] makes it more challenging when they put a new country on the list,&#8221; Vinluan said.

For information about qualifications and blood drives, go to www.oki.med.navy.mil, click on information for patients and community, then blood donor program.