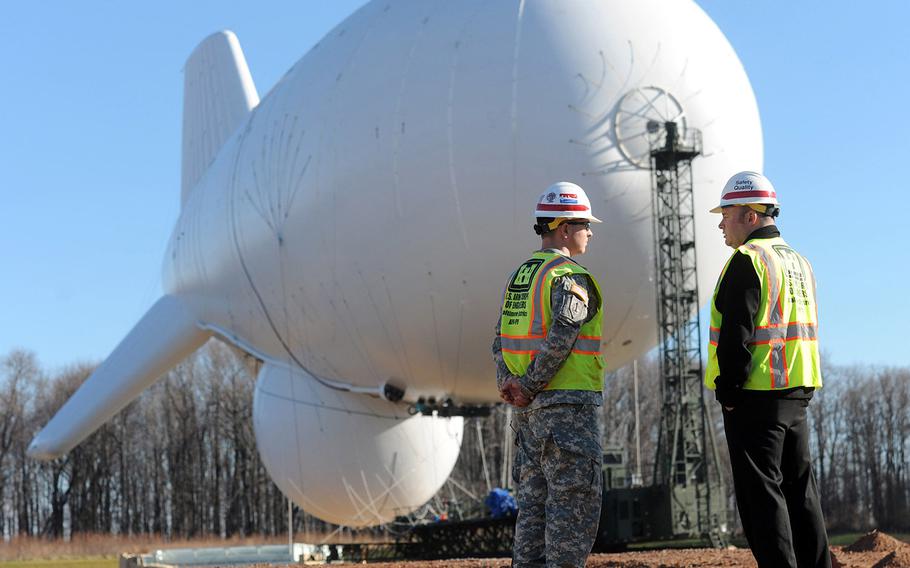 U.S. military authorities said Thursday morning they are still uncertain why the blimp broke loose from its mooring at Aberdeen Proving Grounds just after 12 p.m. Weather should not have been a factor, said Navy Capt. Scott Miller, a spokesman for the North American Aerospace Defense Command. According to Raytheon, the JLENS manufacturer, it can withstand winds of up to 100 mile per hour.

Soon after the JLENS escaped, the Pentagon scrambled a pair of armed F-16 Fighting Falcons to monitor and track the aircraft, but shooting the blimp down was never “seriously considered,” Miller said.

NORAD focused on working with local and federal authorities, including the Federal Aviation Administration, to ensure civilian aircraft were not endangered, he said.

Still, the blimp caused problems for the people below as it dragged a length of tether and knocked out power lines. About 27,000 customers in two counties briefly lost power, according to electric utility PPL.

Villa said it could take days or weeks to remove the JLENS that remains stuck in trees along a ravine in a hard-to-access area with no roads directly leading to the site. Sensitive electronics onboard the aircraft were removed, and state troopers were using shotguns Thursday to deflate the blimp. An investigation into the incident is underway, he said.

The aircraft was one of two such blimps stationed at Aberdeen, where it has been undergoing a three-year operational test to determine if it could provide improved air defenses for the United States. The blimp is the same kind commonly used in the Iraq and Afghanistan wars to provide ground surveillance around U.S. bases and other sensitive sites.

The research, development and initial production of the system has cost $2.7 billion. The blimps provide 360-degree surveillance and detection through a suite of radars and sensors it carries on board. The JLENS is intended to provide constant surveillance and early warning of an incursion into U.S. airspace, to increase the amount of time U.S. defenses have to respond.

The blimp, which was only in testing, was not currently a part of the U.S. defense system, Miller said. Its escape made no impact on the security of the Washington area.