Military base teens get crash course in living Italian style Buy Photo
A group of American teens gather on the steps of Vicenza's Basilica Palladiana during one of several city tours provided each summer by U.S. Army Garrison Italy for newly arrived middle- and high-school students. (Nancy Montgomery/Stars and Stripes)

Buy Photo
A group of American teens gather on the steps of Vicenza's Basilica Palladiana during one of several city tours provided each summer by U.S. Army Garrison Italy for newly arrived middle- and high-school students. (Nancy Montgomery/Stars and Stripes) 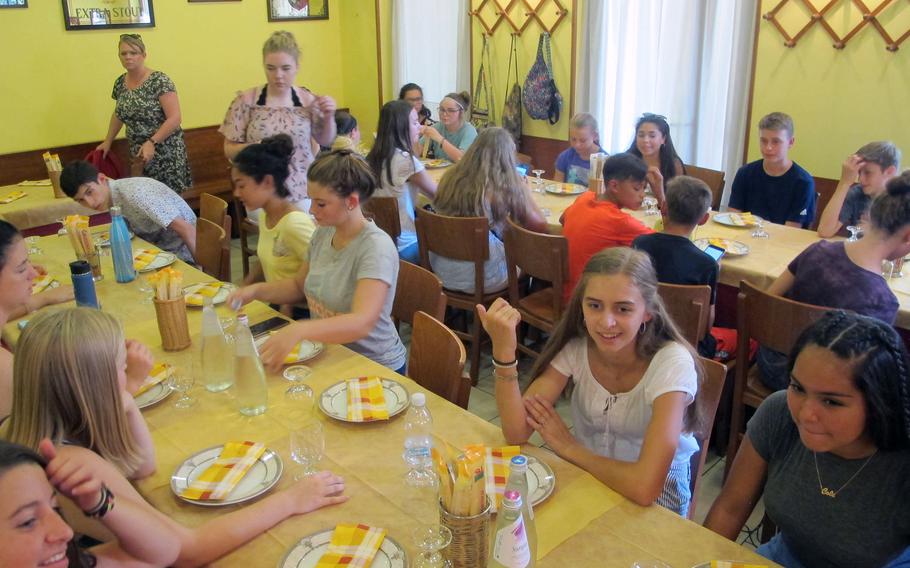 Buy Photo
U.S.teenagers newly arrived to Italy with their parents during the summer PCS season await pizza near the end of a garrison-provided walking tour designed to acquaint them with the local culture. (Nancy Montgomery/Stars and Stripes )

VICENZA, Italy — By noon, they had already shopped for trinkets and stopped for gelato.

Now here they were, a platoon of teenagers in a hot, strange land, decamped on the steps of the city’s premier building awaiting another talk on their new home’s history and culture.

Riposo? That’s the Italians’ long midday break when you can’t shop, buy gas, or, past 2 p.m., get lunch.

Andreas Palladio? The famous Renaissance architect responsible for the Basilica Palladiana, the city’s turquoise-domed showpiece, on whose shaded steps they sat.

The middle- and high-school students were on a recent August afternoon taking part in U.S. Army Garrison Italy’s “Teenvenuti.” It’s a welcome program designed to soften what can be an intimidating transition for military kids who make frequent moves with their parents, including to a country with a different language and culture, where they can’t drive and there are no Chick-fil-As.

“When you first get here you’re very frustrated and very scared,” said Ella Dupree, a Vicenza High School junior who’s lived in Vicenza for several years. “But there’s nothing to be scared of.”

Dupree was one of about 15 seasoned teens who, along with four women employed by the garrison, took 15 new arrivals on a walking tour of the city’s old town. She volunteers as a “student leader,” giving cultural talks on the walking tour, preparing welcome packets for the newly arrived teens and participating in “after-action reviews.”

“I do it because I love introducing new people to the city,” Dupree said. “And so people won’t be lonely.”

The program runs during July and August, when 30 percent of the garrison’s students come or go.

Beth Potter, Vicenza’s school liaison and basically the Teenvenuti generalissimo, said that the program reaches about 80 percent of the newly arrived teens.

Quiet at first, the group visibly and audibly relaxed at lunch, where the universal language was spoken: free pizza.