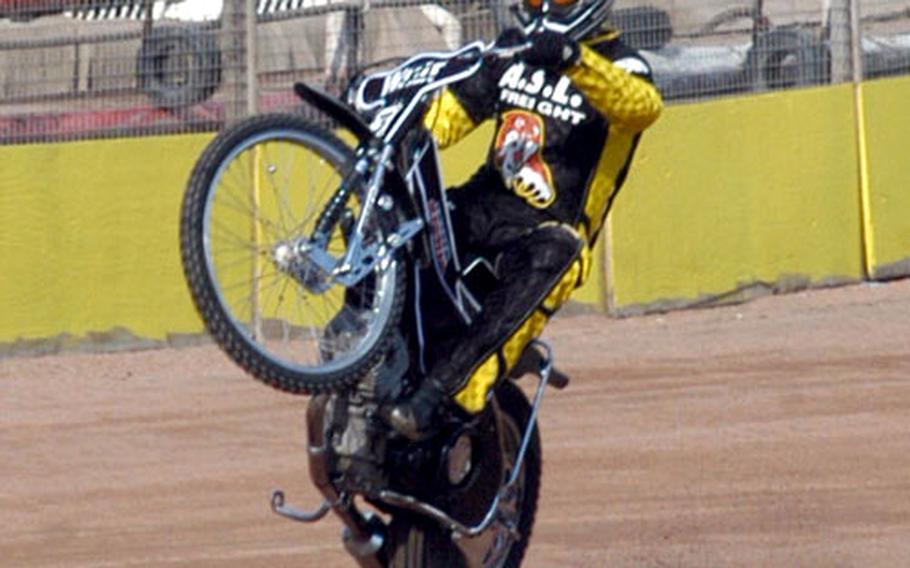 A member of the Fen Tigers racing team shows off by popping a wheelie with his 500cc racing bike while on the Mildenhall Speedway track during a recent practice run. (Sean Kimmons / S&S)

A member of the Fen Tigers racing team shows off by popping a wheelie with his 500cc racing bike while on the Mildenhall Speedway track during a recent practice run. (Sean Kimmons / S&S) 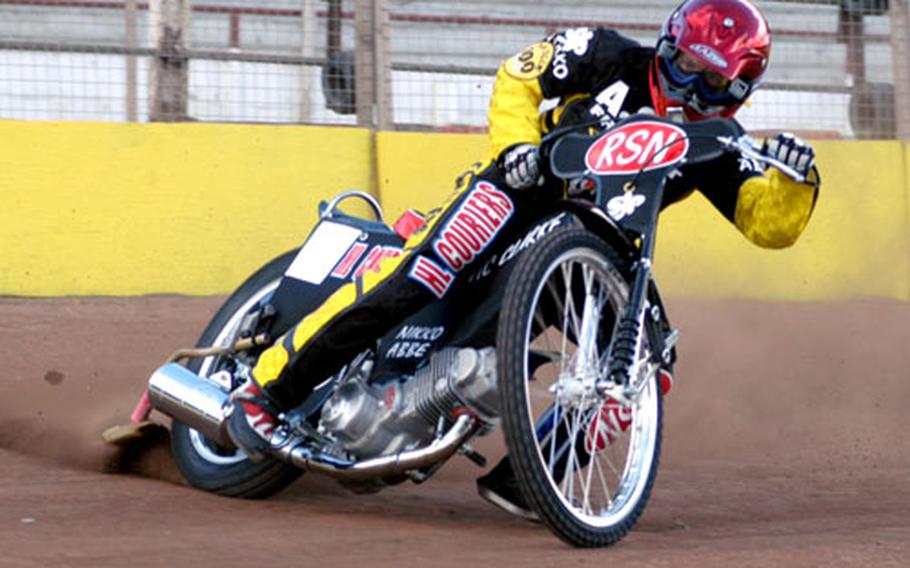 Jon Armstrong, a member of the Fen Tigers racing team, skids his 500cc racing bike around a corner during a practice run at the Mildenhall Speedway track. (Sean Kimmons / S&S) 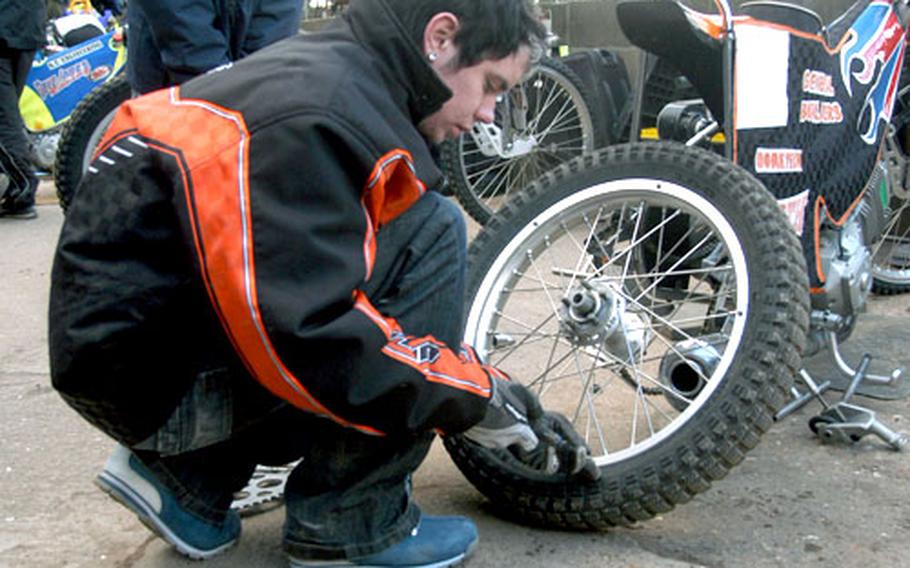 Rob Smith, 18, changes a tire on a 500cc racing bike for a friend at the Mildenhall Speedway track. (Sean Kimmons / S&S)

But in England the term relates to a much smaller, more intimate &#8212; yet still fast &#8212; sport involving powerful, low-slung motorcycles fishtailing around a short, dirt track.

A little bit dirt-bike racing, a little bit grand prix, it&#8217;s a wild and loud weekend sport defined by two things: The bikes only have one gear, and there are no brakes.

While popular among many British racing enthusiasts, the sport goes mostly unnoticed by Americans who live within just a few miles of weekly rallies.

Last Thursday, members of the local riding team, the Mildenhall Fen Tigers, got together at Mildenhall Speedway, situated about two miles from RAF Mildenhall, for a practice event to announce their 2006 teams and give the motorcycles a first run of the season.

Mildenhall this year was elevated to a higher category of speedway racing, the Premiere league (one short of Elite, the top category), upping the number of races at the local track and boosting the level of competitors who will show up to race, Fen Tigers promoter Mick Horton said.

Horton said he is trying to market the sport of speedway racing to Americans this year more heavily than ever, making overtures to military community members on base through ads and promotions.

Longtime fans said Thursday that speedway racing has long been an underground sport at Mildenhall, but the level of competition has been raised with the new Premiere league status.

Without any brakes, the riders stop by switching into neutral, shutting off the engine and using their left foot, clad in a special metal shoe cover, to dig into the dirt, said Peter Flack, a longtime speedway enthusiast.

With speeds averaging about 50 mph for a lap, hitting 60 mph or better on the straightaway, the sport is recognized by the way the motorcycles take the corners, sliding around them in a long, looping fishtail. It&#8217;s a fast, unstable way to ride, and crashes are regular, fans said.

For American eyes, it&#8217;s not a familiar sight, but there are specialists in the sport from the U.S. On April 9, Mildenhall will host a group called the American Dream Team, who will travel from the States to the local track to take on the Fen Tigers&#8217; Conference league riders (one below Premiere league) in an exhibition match.

In regular season races, the Fen Tigers began Sunday, and their next home engagement is March 19 at the Speedway. Further information can be found at: www.mildenhallspeedway.com.