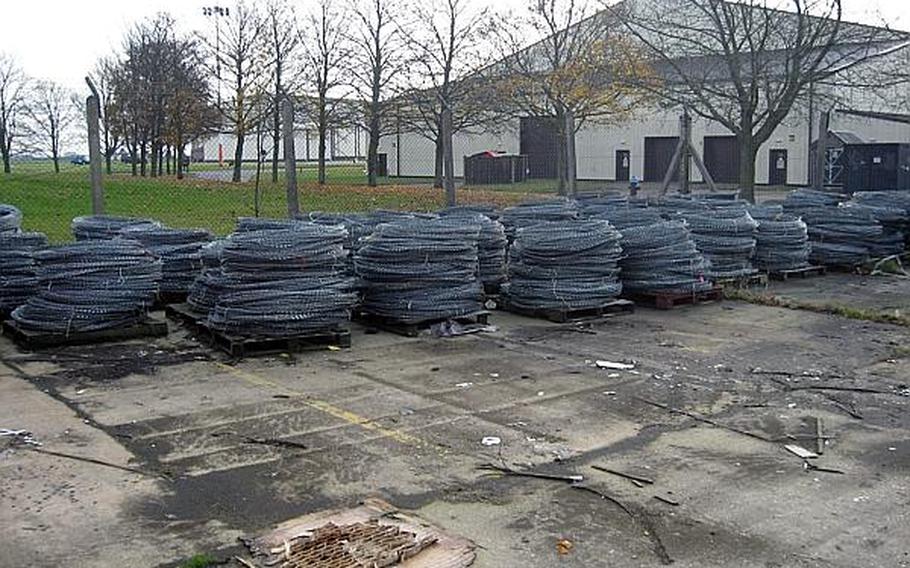 Bales of Concertina wire were given to another unit after being listed on a site that allows U.S. Air Force units to give unused items to other units. The site was developed at RAF Mildenhall, England, as an effort to meet an Air Force-wide push to save money. (Charles Nelson/U.S. Air Force)

Bales of Concertina wire were given to another unit after being listed on a site that allows U.S. Air Force units to give unused items to other units. The site was developed at RAF Mildenhall, England, as an effort to meet an Air Force-wide push to save money. (Charles Nelson/U.S. Air Force) 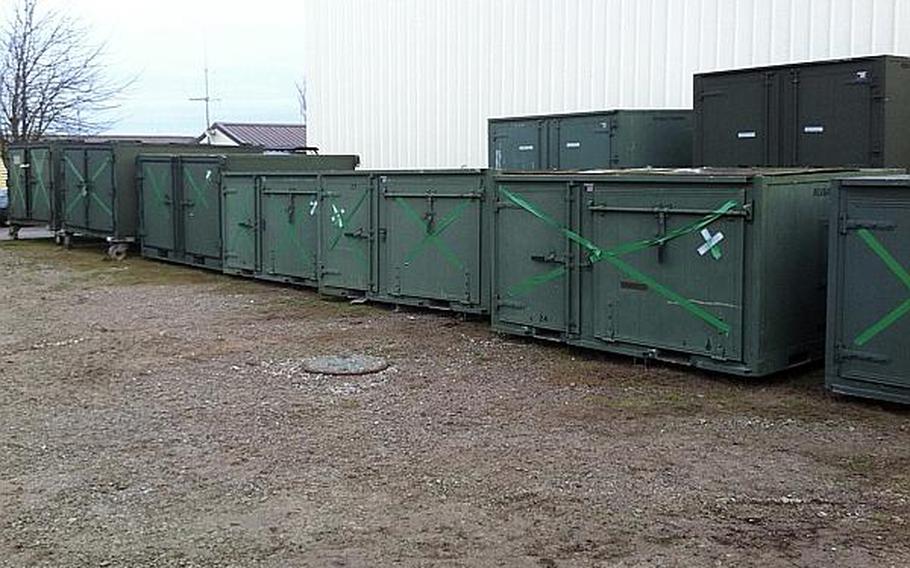 Internal aircraft and helicopter container units are worth $16,000 per unit, according to Sgt. Charles Nelson, the supply noncommissioned officer in charge with the 100th Security Forces Squadron. These found new use with other units after being offered on a digital message board created at RAF Mildenhall, England, that allows units to offer supplies they no longer use to other units. (Charles Nelson/U.S. Air Force)

For a family, this may mean a garage sale to clear out unwanted items, or posting them on Craigslist. For a military unit, which has to account for every item purchased with taxpayer dollars, it’s not that simple. Or, maybe it is.

Usually, when government-owned property is no longer needed, a military unit can call the Defense Logistics Agency, which either finds the stuff a new home or disposes of it, but that can involve more money spent on transportation.

A group at RAF Mildenhall decided there was a better way.

It came up with a craigslist-style digital message board available on an internal-only site. Units can list unused items, which other units can pick up, said Capt. Jeffrey Lehnert, the site’s main developer.

While the site is only about 4 months old — and only available to Air Force personnel — Lehnert said it has made it possible for more than $300,000 worth of inventory to find a second life with a new unit. What can be offered is limited to items bought with a government purchase card.

“It costs extra money to have extra inventory, because you’re taking up space with that and then you have to spend time moving it around,” Lehnert said.

The idea came about in response to a U.S. Air Force money-saving push.

The Commander’s Action Group at Mildenhall, a group of officers who work on issues that affect more than one unit on the base, decided the best way to accomplish this was through a list site they christened with their own acronym: CAG.

So far, the bulk of the savings generated by the site comes from the effort of Staff Sgt. Charles Nelson, the supply noncommissioned officer in charge for the 100th Security Forces Squadron, who also helped create the site. His unit cleaned out warehouses of equipment and put 1,461 items on the site, including Concertina wire, fencing and refrigerators. His unit has given others more than $320,000 worth of equipment and still is offering more than $6,000 on the list.

Nelson has noticed that people are starting to check the list before buying new items.

“I feel this program is going to continue to grow, and as it grows, it will hopefully become an Air Force or even a military [program],” Nelson said. Nearby, RAF Lakenheath has already started requesting items from him through the site.