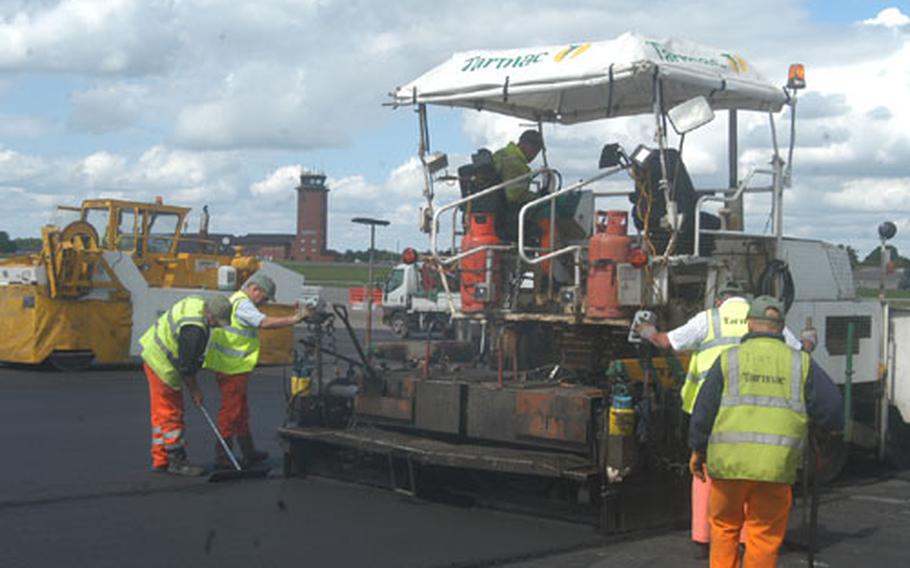 Work on the new runway surface at RAF Mildenhall, England, should be done by mid-July. The KC-135 Stratotankers from the 100th Air Refueling Wing have been flying from RAF Fairford since construction began in March. (Ron Jensen / S&S)

Work on the new runway surface at RAF Mildenhall, England, should be done by mid-July. The KC-135 Stratotankers from the 100th Air Refueling Wing have been flying from RAF Fairford since construction began in March. (Ron Jensen / S&S) 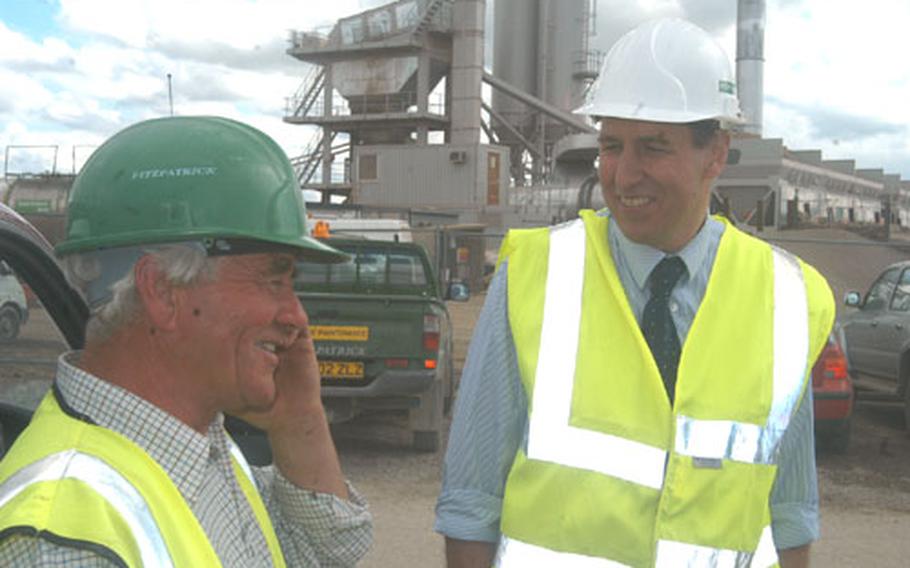 Neil Smith, left, general foreman, and Tim Eden, project manager, chat Friday about the runway reconstruction project at RAF Mildenhall, England, in the shadow of a temporary plant built to mix the tons of concrete needed for the project. (Ron Jensen / S&S)

RAF MILDENHALL, England &#8212; While not quite as poetic as swallows returning to Capistrano, the KC-135 Stratotankers of the 100th Air Refueling Wing will return to RAF Mildenhall in late July.

They have been flying since March 1 from RAF Fairford, about 160 miles to the west, while the runway at their home has been undergoing extensive renovation.

But that will be complete in a few weeks and the tankers and about 600 airmen will return to East Anglia.

The other missing aircraft &#8212; the nine C-130s that belong to the 352nd Special Operations Group &#8212; have been flying from nearby RAF Lakenheath. They will return soon after the KC-135s.

The runway project is 62 percent complete, Chris Nicholson, project manager for the 100th Civil Engineer Squadron, said on May 21.

Early estimates were that work would be completed in late August, but as the project planning was refined, that estimate was moved up.

Spence said the effort also was blessed by good weather.

Returning pilots will notice a smoother landing surface because &#8220;we have taken some of the bumps out of it,&#8221; said Tim Eden, project manager for Fitzpatric Contractors Ltd., which is doing the work along with Tarmac Ltd.

The old concrete surface, which was put down 15 years ago, had been worn smooth by years of aircraft landings, reducing the friction used to help the planes maintain direction and come to a controlled stop.

The main portion of the runway, which stretches about 8,000 feet, not including overruns on each end of about 1,000 feet, has been covered with about 2 inches of a hard asphalt surface.

That is now being topped with about an inch of asphalt that will give tires more grip when they touch down and reduce the possibility of aquaplaning by pushing the water through tiny channels in the asphalt.

The work also included replacement of concrete in the overruns. That required breaking out the concrete there and replacing it, adding grooves to the surface for added friction. The thresholds, which are between the runway and the overruns, were grooved for better friction, as well.

It is a massive project, with 200 trucks coming and going daily during the peak part of the effort. About 43,000 tons of concrete was removed, with 15,000 tons of that recycled back into the project. The rest was taken to other projects for re-use.

Spence said there are 23 other projects going on at the same time, everything from airfield markings to electrical cable, a total of $24 million in projects. Their completion also will be factors in when the 100th ARW gets back to full business.