Mildenhall opens its doors to siblings of ill children 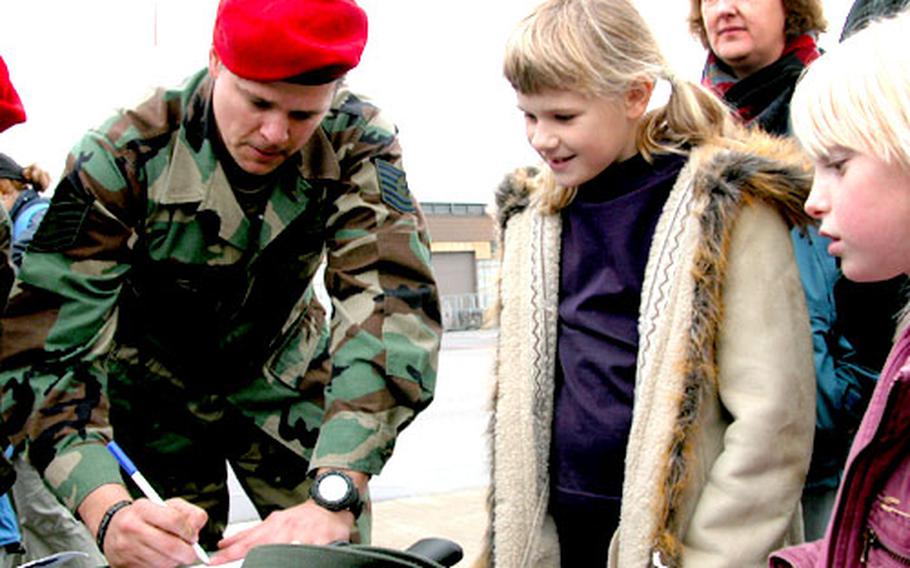 Tech. Sgt. Ty Clark from RAF Mildenhall signs an autograph Friday during Sibling Appreciation Day, which was to entertain the brothers and sisters of terminally ill children. (Charlie Coon / S&S)

RAF MILDENHALL, England &#8212; Children who are very sick get a lot of attention.

But sometimes their brothers and sisters miss out.

Ten-year-old James Maisey loses his mom whenever she has to go away to care for his sick brother, Stuart.

However, Friday was for James and kids like him when airmen at RAF Mildenhall hosted Sibling Appreciation Day.

About 40 British children who are growing up with the pressure of having a sick sibling were able to let it go for a while as they met airmen, toured a cargo plane, checked out gear and climbed around inside a helicopter.

The group was brought together by the East Anglian Children&#8217;s Hospice, which specializes in helping terminally ill children and their families get through tough times.

The airmen already host events for critically ill children such as &#8220;pilot for a day.&#8221; They figured the brothers and sisters of these children could use a smile as well.

The children and about 25 adults arrived aboard three buses. After climbing around on the plane and helicopter and checking out the gear, they went for pizza.

Later, the kids also were treated to a K-9 show and fire truck display.

Jamie Conway&#8217;s little brother, 18-month-old Danny, died three years ago after months of fighting for his young life. For Jamie, who is just 11 years old, it was a rough time.

So when Jamie got to tour the helicopter, aim the gun and sit in the pilot&#8217;s seat, life was a little better.

Jamie concluded that his visit to the U.S. military base was a real eye-opener.

Tech. Sgt. Ty Clark of Chattanooga, Tenn., and members of his team showed the kids their parachutes, night-vision equipment, pistols and machine guns, satellite radios other tools of the trade.

Then they signed autographs.