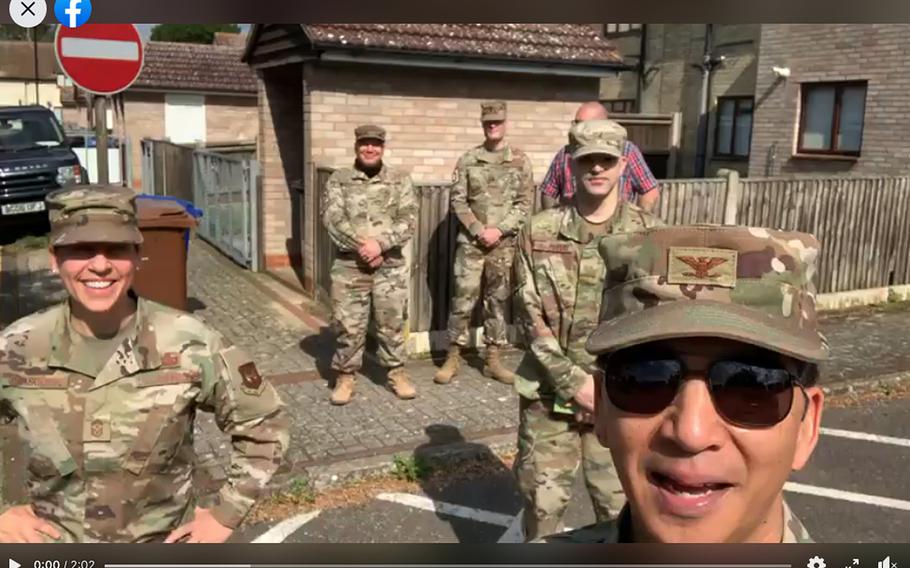 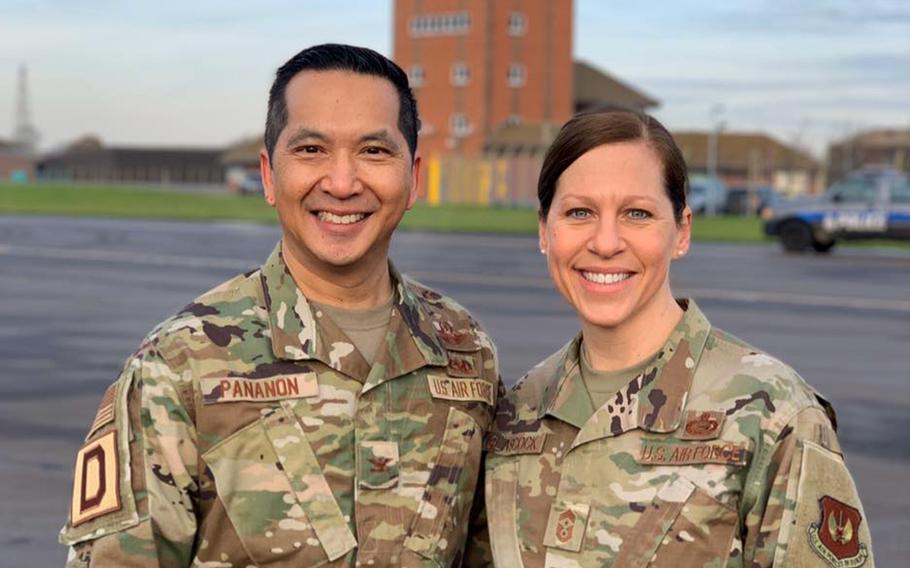 Col. S. Troy Pananon and Chief Master Sgt. Kathi W. Glascock, 100th Air Refueling Wing commander and command chief at RAF Mildenhall, England, have posted a daily update video to Facebook every duty day since mid-March. The updates have helped them to build bonds with airmen and gained them a following, with viewers as far away as New Zealand. (100th ARW Command Team/Facebook)

Each episode of the RAF Mildenhall command team’s video series begins with a quick hello and the same cheerful introduction.

Filmed with an iPhone on a selfie stick,each episode lasts a little more than a minute, during which the pair highlights a guest and provides base and community information to viewers.

They’ve also had fun along the way, featuring a hedgehog guest named Mr. Maguire who was rescued on base, showcasing the winners of a planking challenge — who, naturally, were planking in the video — and letting their back-to-school episode be taken over by Pananon’s daughter Ela and Glascock’s daughter Sydney. And they’re not afraid of poking fun at themselves, posting outtakes of an episode shot on the flightline, where they made some bloopers and had selfie stick issues.

While it’s become common during the coronavirus pandemic for commanders to post frequent video updates or hold virtual town halls, the 100th ARW team’s daily routine stands out for its regularity and commitment.

The England-based duo started providing the daily updates five months ago as the coronavirus pandemic forced schools to close. After producing a show every duty day since March 18, they have no plans to stop.

“It was our initial response to the pandemic,” Pananon said. “We knew communication was going to be difficult, so we wanted to find a way to connect with all of our airmen and pass a deliberate message.”

Glascock and Pananon designed the updates to deliver a concise message to their audience, and think they’ve found a good way to communicate with airmen.

“Thank you, guys, for taking the time to present these videos,” Facebook user Vernon Miles said in a comment on the team’s 100th video. “They are a good source of information and morale booster. Keep up the great work.”

The series has helped the duo to build trust with viewers, Pananon said.

“Airmen know they can bring a problem to us and we will listen and try to address it,” he said.

In an episode last week, the pair stood in front of members of the 100th Communications Squadron and explained how internet issues in base housing are being fixed.

“We didn’t know the internet problem was so bad until we heard from a deployed husband who said his wife was having problems with virtual school,” Glascock told Stars and Stripes.

Many of the videos highlight the unit’s airmen, such as Capt. Skye Robinson, who, to her surprise, was told in a recent episode that she had been named U.S. Air Forces Europe’s 2020 nominee for the service-wide Lance P. Sijan Leadership Award.

The show also reminds and informs viewers about coronavirus regulations and prevention measures, which Pananon credits with helping slow the spread after the first cases were diagnosed on base on March 21 – days after the updates started.

“We have had an extremely low case rate and we went almost four months with zero cases,” he said.

The 100th ARW is the only permanently assigned air refueling wing in Europe and supports more than 16,800 military, civilian, dependent and retiree personnel, according to the base’s website.

The command team’s Facebook page has close to 4,000 followers and Pananon said he’s received comments from as far away as New Zealand.

Glascock is now “famous” at her son’s school, and both hosts have been recognized around base as the team that does “the show.”

Glascock and Pananon plan to continue the show until their last day at Mildenhall, in the summer of 2021.