A woman walks past a new furniture shop in Mildenhall operated by the St. Nicholas Hospice. The shop hopes U.S. base personnel will volunteer and donate items that will raise money for the hospice. (Sean Kimmons / S&S)

A woman walks past a new furniture shop in Mildenhall operated by the St. Nicholas Hospice. The shop hopes U.S. base personnel will volunteer and donate items that will raise money for the hospice. (Sean Kimmons / S&S) The store, scheduled to open in February, will raise money to help care for terminally ill patients at hospice. (Sean Kimmons / S&S) 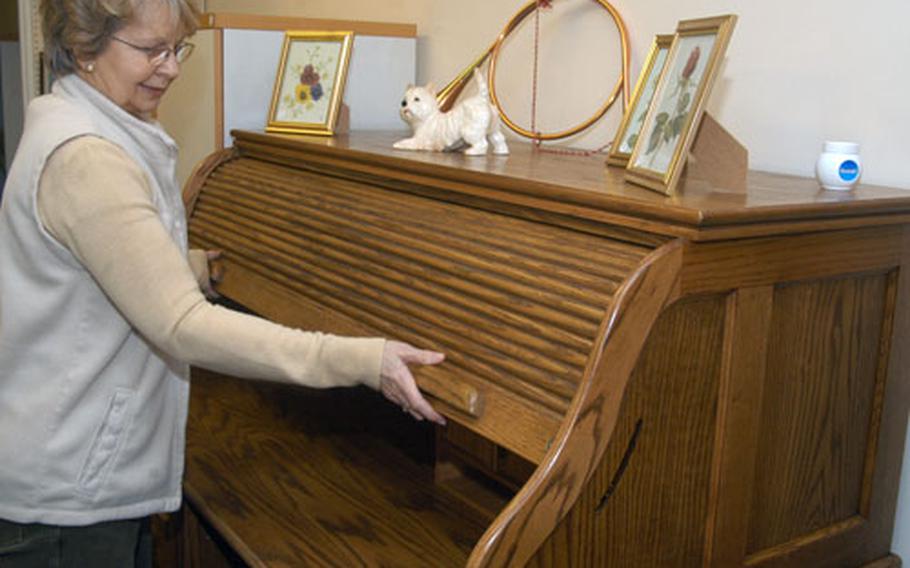 MILDENHALL &#8212; The St. Nicholas Hospice in Bury St. Edmunds survives with the help of a dedicated staff of volunteers and donations. And they&#8217;re looking for more.

The hospice supports terminally ill patients with its 12-bed care center manned by nurses and doctors. It also offers counseling and respite to family members of those dying.

As much as 3 million pounds is needed each year to keep the hospice running, and donations don&#8217;t always foot the bill.

It&#8217;s up to volunteers to earn the rest by operating eight charity shops in nearby British towns, including a new furniture shop in Mildenhall that opened last week.

The shop, located in the town&#8217;s Market Square, seeks at least 22 volunteers in order for it to run smoothly. Manager Gill Ingham is hoping personnel from nearby RAFs Mildenhall and Lakenheath will be able to lend a hand.

&#8220;The more volunteers we can get, the more we can do,&#8221; said Ingham, adding that those interested would only have to work a four-hour shift each week.

Additional volunteers are needed to sort through donated items at a warehouse in Bury St. Edmunds. A couple of vans and some strong men also are needed to lift and deliver the furnishings to the shop.

Many of the volunteers tend to be women, including a few spouses of retired U.S. airmen, Ingham said.

Ingham once was married to a U.S. airman. She recalled how nice it was integrating into the different communities as they traveled to bases in the States and Europe.

Those who don&#8217;t have the time to volunteer can still help the hospice by donating money or items to be sold at its shops. And for airmen leaving the country, the hospice will gladly take unwanted items to lighten up their move.

However, there are some restrictions.

Soft furniture, such as couches and sofas, are required to have a U.K. fire retardant tag in order to be sold at the shop. Most U.S. brands don&#8217;t have this, she said.

American desks, tables and other furnishings can be donated, though. Large items can be picked up from a donator&#8217;s home, even if it&#8217;s located on a base, she said.

Ingham believes that an airman recently donated a colonial American-style, roll-top desk. The shop is looking to fetch 450 pounds for the wooden desk.

That money will come in handy as the hospice plans to set up a new home care service for its patients.

Interested in volunteering or donating to the St. Nicholas Hospice? Call 01638 716831. For more information, go to www.stnh.org.uk.

The hospice&#8217;s furniture shop in Mildenhall is located at 23 Market Place. There is another shop operated by the hospice at 33 Market Place that sells other items, such as clothes, games and bric-a-brac.