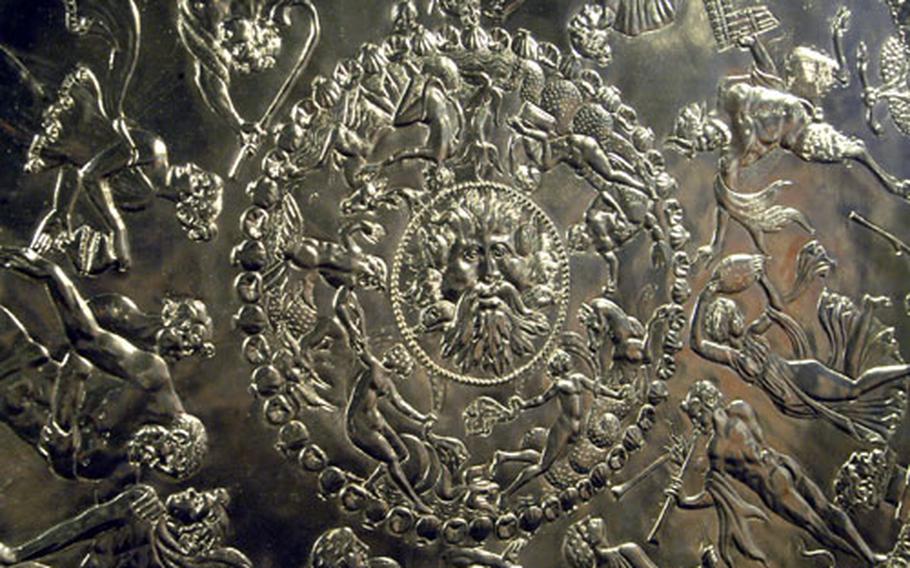 A highlight of the Mildenhall Museum is the silver-plated replica of The Great Dish, a Roman silver dish discovered in a West Row field in 1943. (Sean Kimmons / S&S)

A highlight of the Mildenhall Museum is the silver-plated replica of The Great Dish, a Roman silver dish discovered in a West Row field in 1943. (Sean Kimmons / S&S) 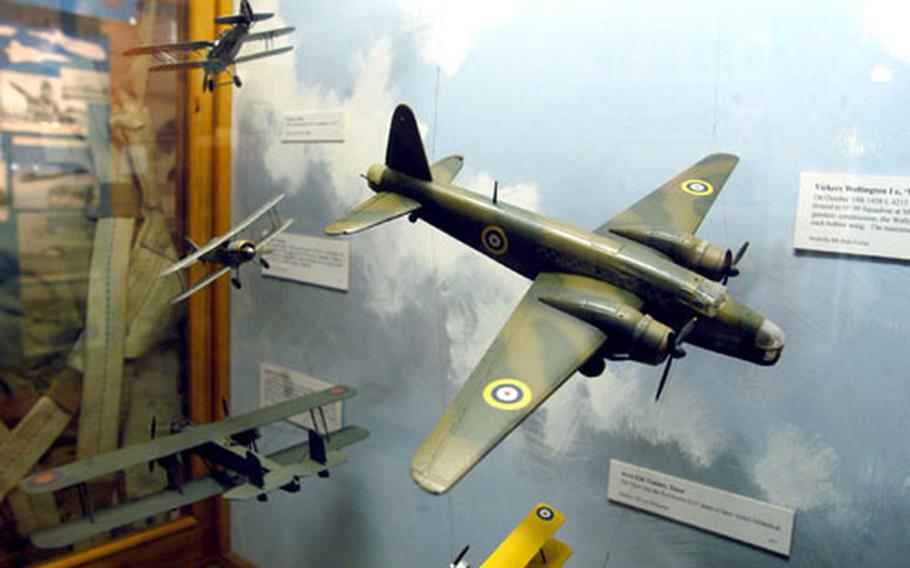 Models of aircraft that called Mildenhall airfield home in the 1930s and ’40s hang in one of the exhibits. (Sean Kimmons / S&S) 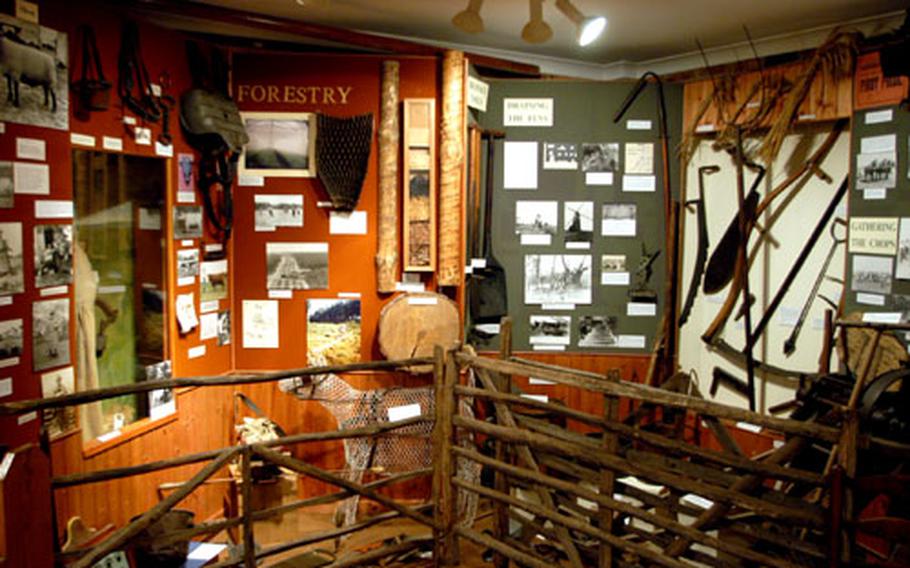 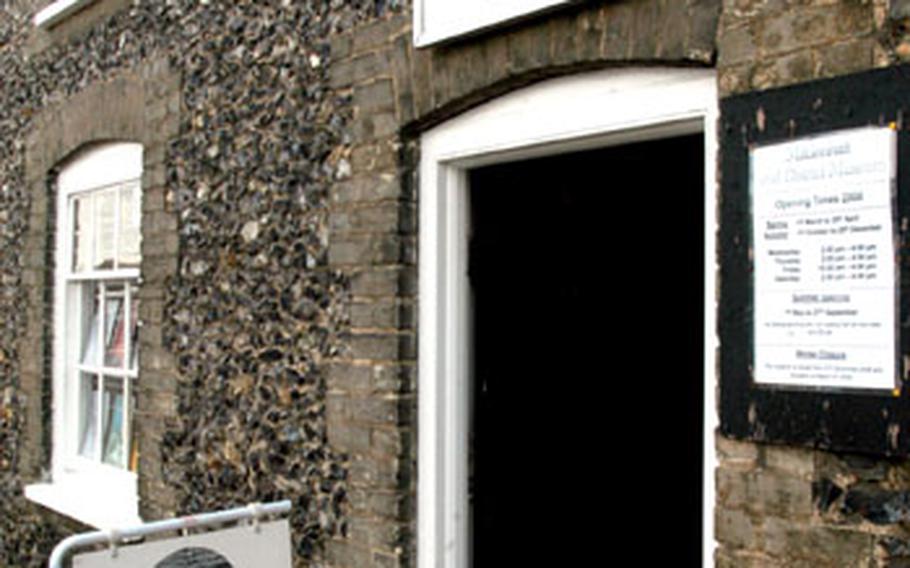 The discovery of the 18-pound, 2-foot-wide round plate, called The Great Dish, and about 30 other silver tableware items such as platters, spoons, goblets and bowls later, became known as the Mildenhall Treasure.

The collection eventually made its way to London&rsquo;s British Museum, where some of it can be seen today. But just as good is an exquisite silver-plated replica of the treasure found right down the street from RAF Mildenhall.

Upstairs in the Mildenhall Museum, located on King Street, the silver pieces fantastically glimmer under spotlights. The reproduced Great Dish is showcased in the middle of the exhibit&rsquo;s room.

Although presented in an enclosed case, visitors can still get within inches of the plate to see its finer details. Roman revelers dance around the outer ring of the plate circling an embossed face of a sea god believed to be Neptune or Oceanus.

&ldquo;It&rsquo;s a perfect replica of the whole treasure,&rdquo; said Stephanie Palmer, chairwoman of the museum&rsquo;s trustees. &ldquo;Even the British Museum only has a third of it on display.&rdquo;

Palmer added that the museum also touches on the story and mystery behind the treasure in its exhibit.

Besides the treasure trove, visitors can view numerous other exhibits in the small museum, which is free to enter.

Also upstairs is the museum&rsquo;s RAF Mildenhall room that delves into the base&rsquo;s role as part of the Allied bombing offensive during World War II. More than 200 Mildenhall aircraft were lost and 1,900 base personnel were killed in action in the war, according to one display.

The room also has models of the different aircraft that called the airfield home in the 1930s and &rsquo;40s, next to a display on the base&rsquo;s continuing relations with the community.

Nearby is the Archaeology Gallery that has various specimens from the Stone Age to the Anglo-Saxon periods.

Visitors can then head downstairs to an exhibit on plants and wildlife found within the Fenlands and Brecklands. RAFs Lakenheath and Mildenhall sit on the edge of both these land areas.

And a quick look around the display sees the head of a Brecklands roe deer hanging on a wall. Next to the deer head is a display on ancestral food-gathering with ancient arrowheads as old as 8,000 B.C., as well as traps that caught slippery eels in local waterways.

Another display is dedicated to yesteryear&rsquo;s farming, which shows off old farming tools, such as a curd knife used to make cheese. Then there is a display on how a swampy Fenland area was drained back in the 17th century.

A nearby forestry display tells visitors about the brecklands tree-planting plan that began in the 1920s. Today, pine trees cover 19,500 hectares in the area, which is Britain&rsquo;s largest pine forest &mdash; better known as Thetford Forest.

Another room has been transformed into an early day kitchen, complete with cooking utensils from the 17th to 20th centuries, among other items.

The museum may not spark everyone&rsquo;s interest or draw any large crowds. But the museum&rsquo;s displays could help people who are new to the country better understand the local area. Plus, no pricey British pounds are needed to enter, since there&rsquo;s no entrance fee.

Admission: There is no charge to enter.