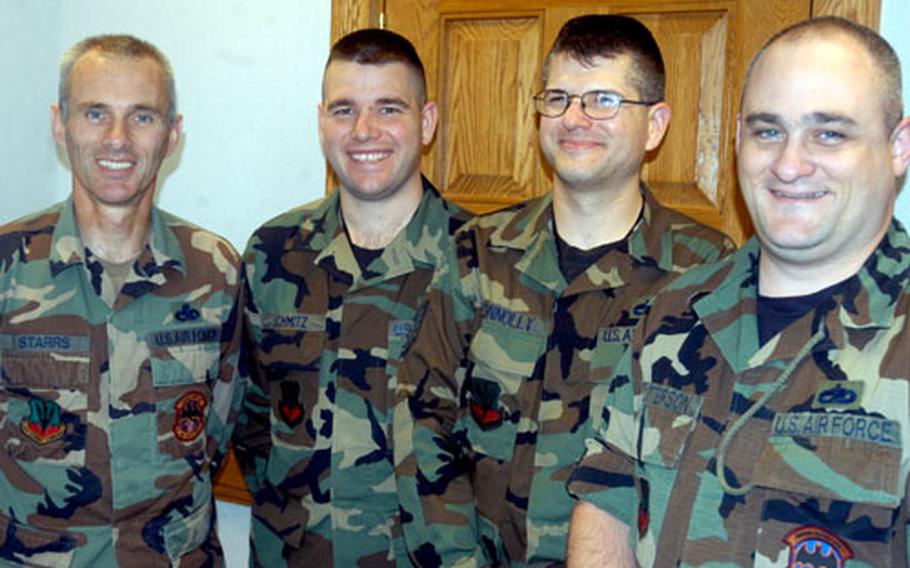 Three members of the 488th Intelligence Squadron at RAF Mildenhall, England, will travel by bicycle from the southwest tip of England to the northern tip of the Scottish mainland to raise money for the Make-A-Wish Foundation. The riders are, from left, Master Sgt. Kevin Starrs, Tech Sgt. Glenn Schmitz and Tech Sgt. Patrick Connolly. Tech Sgt. Mike Patterson, far right, will travel along in a van carrying supplies and camping equipment for the 1,000-mile journey. (Ron Jensen / S&S)

RAF MILDENHALL, England &#8212; Three members of the 488th Intelligence Squadron will begin a 1,000-mile bicycle trip Saturday that will take them from the southwest tip of England to the northern tip of the Scottish mainland.

The purpose of the journey, which they plan to complete in 9&#189; days, is to raise money for the Make-A-Wish Foundation, which grants wishes to seriously ill and dying children.

The riders &#8212; Master Sgt. Kevin Starrs, Tech. Sgt. Glenn Schmitz and Tech. Sgt. Patrick Connolly &#8212; will begin their trek at Land&#8217;s End on the southwest tip of England in Cornwall. They will finish at John O&#8217;Groats, the final piece of British mainland.

The journey is a common one in Great Britain for bikers, walkers and even people on unicycles. Starrs said he broached the idea with Schmitz, and they mentioned it to Connolly.

The four airmen have received permissive temporary duty for 10 days to make the journey, but will need a day or two of leave, as well. As planned, the final day of the trip will be a 30-mile ride, some photos, a glass of champagne or two and then jumping into the van for the drive back to Mildenhall.

Patterson said he plans to update the Web site &#8212; www.bikewish.com &#8212; when he can find Internet access. It will feature photos and a map of the journey to that point.