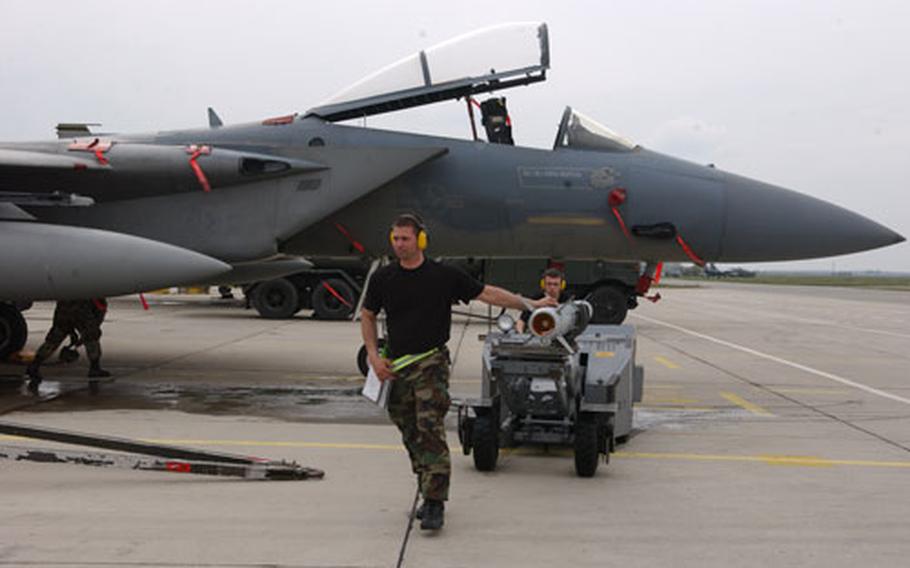 A weapon&#39;s specialist changes the aircraft&#39;s live munitions for the NATO summit in Bucharest, Romania, to training munitions in preparation for exercises that took place earlier this month with the Bulgarian air force. (Jill LaVoie / Courtesy of the 48th Fighter Wing)

Getting a chance to dogfight the notorious MiG-29 last summer in Bulgaria was a dream-come-true for Lt. Col. Troy Stone.

Until then, Stone, the 48th Operations Group acting commander at RAF Lakenheath, had spent his flying career practicing combat maneuvers mostly with the F-15 fighter jets he pilots.

On his latest training mission to Eastern Europe &#8212; this time to Romania as commander of the 404th Expeditionary Group &#8212; Stone and members of the 48th Fighter Wing did not train with the Romanian MiGs but still gleaned valuable lessons from their former-Communist counterparts.

A group of roughly 200 airmen from the 48th Fighter Wing and the 100th Air Refueling Wing at RAF Mildenhall wrapped up training in Bulgaria and Romania earlier this month on the heels of a NATO summit in Romania&#8217;s capital city of Bucharest, which U.S. forces helped secure.

While Romanian forces took away valuable information on the U.S. Air Force&#8217;s structure, operations and training tactics, Stone said the Americans stand to learn a lot from the country&#8217;s pragmatic military.

&#8220;One afternoon there was some damage to the runway, and they fixed it within two hours. It would have taken us three days to get that fixed,&#8221; he said. &#8220;They did it by improvisation. It was ingenious.

&#8220;It was pretty amazing,&#8221; he said. &#8220;The Romanian [military] had a chaplain service up until [World War II], but when the Communists took over, the chaplains were removed. It was not reinstated until 1996. So they&#8217;re proud to have a chaplain service after years of having their religion repressed under the Communist rule.&#8221;

Like Stone, Boyer agrees the two forces have more commonalities than differences.