Mildenhall airman's musical talent is no longer a secret 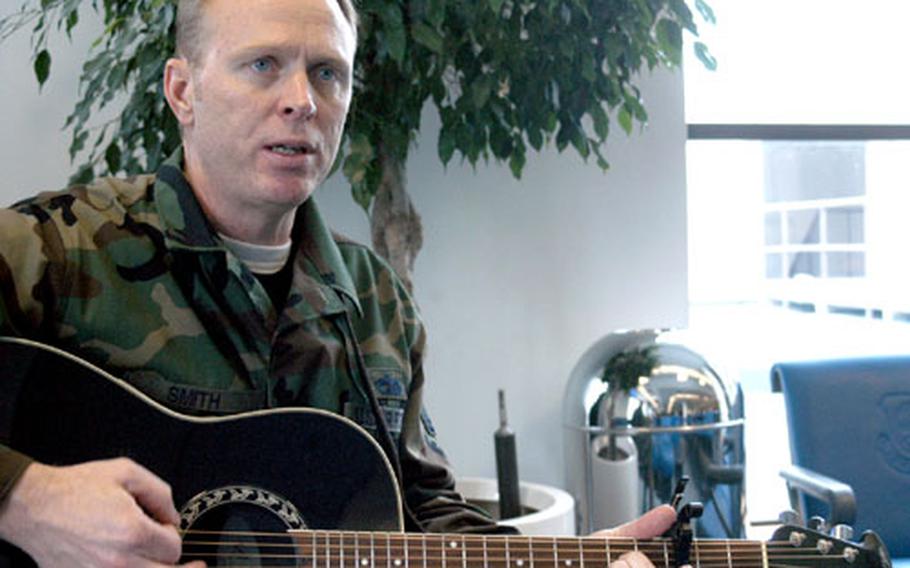 Tech. Sgt. Clay Smith sings a song from his upcoming album, due out in January. (Ben Murray / S&S)

RAF MILDENHALL &#8212; The tale of a musician&#8217;s big break often can be traced to one small event, some action or unforeseen circumstance that gets the rock rolling.

For Tech. Sgt. Clay Smith from Mildenhall&#8217;s Air Terminal Operations Center, that event may have been a nine-minute phone call on Nov. 22.

On the other end of the line were conservative radio commentator Rush Limbaugh and 20 million of his listeners. Smith had phoned during Limbaugh&#8217;s live call-in show, and the two talked about a range of topics, including a pair of music videos Smith had sent the host.

Within a week, the two patriotic-themed videos were on Limbaugh&#8217;s Web site, and obscurity, it seemed, had abandoned him.

It was a bit of providential timing for Smith, a 40-year-old duty officer who has been singing and writing songs since he was a teen. The call came less than two months before Smith&#8217;s second album, &#8220;Whispering Secrets,&#8221; is due to be released.

That album and the celebrity he&#8217;s received are a high point for a chameleon of a military musician.

Also a prolific songwriter who has penned more than 300 original songs, he doesn&#8217;t even know how to read music and just picked up the guitar without lessons, he said.

And even though Smith&#8217;s music mostly sounds like country, he is reticent to categorize it that way, especially the songs on the new album.

They are the two songs that made it onto Limbaugh&#8217;s Web site, and the ones that have generated interest in the music business.

The patriotic songs, though not the bulk of Smith&#8217;s work, are also the ones that best capture the essence of what he said he wants to do with his music: become an &#8220;ambassador&#8221; between military members and the U.S. populace back home.

Having served in Afghanistan, Smith said he thinks Americans in general don&#8217;t get a clear picture of the attitudes and motivations of many servicemembers deployed to war zones.

Smith doesn&#8217;t know if the recent burst of exposure will be the break that launches his music career, he said, and it&#8217;s a prospect he&#8217;s level-headed about.

But like for many aspiring musicians, the lure of the big time doesn&#8217;t go away easily.