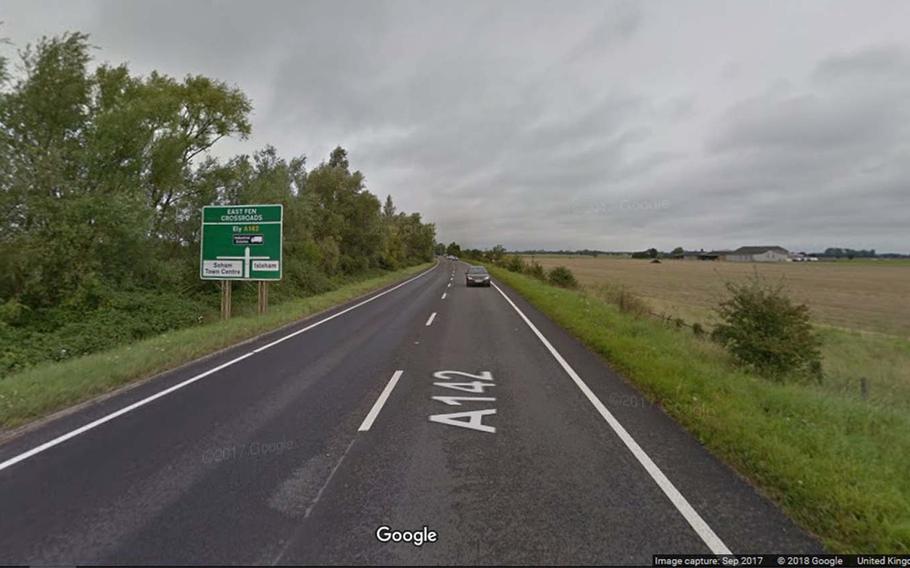 The A142 two-lane highway near Soham, England. Staff Sgt. Adam Naber of the 352nd Special Operations Wing at RAF Mildenhall died Sunday, June 17, 2018, after a motorcycle accident while he was riding in the southbound lane. ( Google Maps )

Staff Sgt. Adam Naber, 24, left the southbound lane of the A142 highway near Soham on his motorcycle and collided into a fence and bushes, local police said.

The Soham bypass was closed for more than three hours while emergency services responded, police said.

“(Staff Sgt.) Naber was a valued member of the 352nd Special Operations Aircraft Maintenance Squadron and will be sorely missed,” wing commander Col. Matthew Smith said in a statement. “Please keep (Staff Sgt.) Naber’s family and friends in your hearts and prayers as we move through this very difficult time.”

The cause of the crash remains under investigation. Anyone who may have witnessed the accident is asked to dial 101 locally and contact the serious collision investigation team.

“An accident investigation is ongoing, and a memorial service is being planned, details of which will be released at a later point in time,” Smith said.