A screen shot of a map inside the Italian coast guard operations center in Rome on Oct. 7, 2015, shows the positions of ships and boats in the central Mediterranean Sea. The operations center fields emergency calls from migrants attempting to cross the Mediterranean from North Africa to Italy and dispatches rescuers. (Steven Beardsley/Stars and Stripes)

A screen shot of a map inside the Italian coast guard operations center in Rome on Oct. 7, 2015, shows the positions of ships and boats in the central Mediterranean Sea. The operations center fields emergency calls from migrants attempting to cross the Mediterranean from North Africa to Italy and dispatches rescuers. (Steven Beardsley/Stars and Stripes) 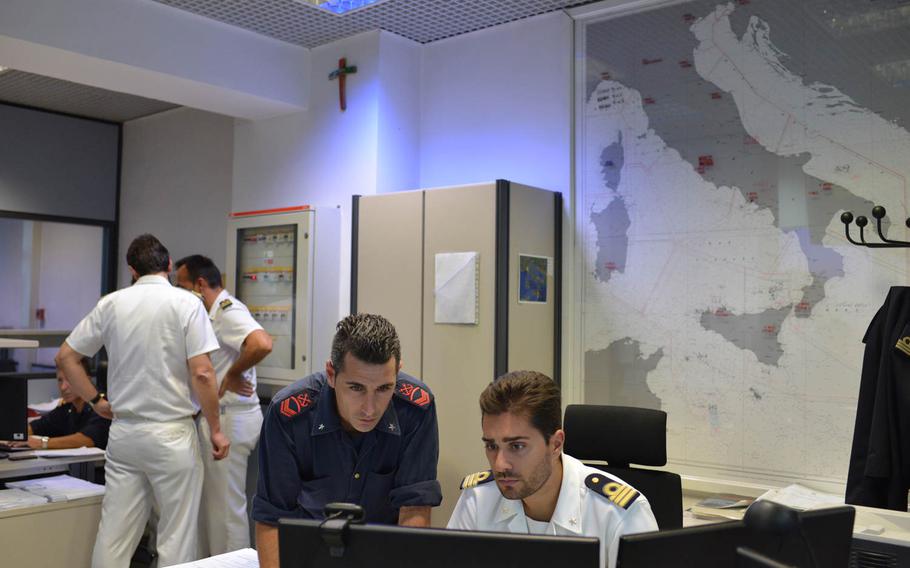 ROME, Italy — Europe is still struggling to prevent migrants from making a dangerous Mediterranean crossing toward Italy, even as the pace of departures has slowed in recent months.

A European Union military operation targeting smugglers is widely seen as inadequate, while a $2 billion aid package for African countries appears unlikely to persuade those nations to improve their border security.

Meanwhile, a peace deal signed by rival factions in Libya — the primary departure point for migrants to Italy — doesn’t guarantee an end to the smuggling operations that drive the crossings, experts say. “The government will be really weak,” said Mattia Toaldo, a policy fellow at the European Council on Foreign Relations. “It won’t have any control over the border or security forces.”

While many of the earlier migrants came from sub-Saharan Africa in search of better economic opportunities, tens of thousands last year were fleeing civil war in Syria. They were joined by Eritreans and Somalis escaping violence in their countries but blocked from former routes through the Sinai Peninsula or Yemen.

After a surge of crossings from Libya this spring and a spike in deaths — 1,700 before the end of April — the rate of crossings and deaths fell as Syrian refugees shifted to safer migration routes through Turkey into Greece. Rescues improved as the EU expanded the limits of its border operation in the Mediterranean, while nations such as the United Kingdom and organizations like Doctors Without Borders deployed shipsin support.

More than 150,000 migrants are estimated to have made the crossing into Italy this year, according to the International Organization for Migration. Nearly 2,900 died in the attempt, a lower figure than projected earlier in the year and down from the more than 3,200 killed in 2014.

“In terms of loss of life, we’ve made some more steps forward,” said Federico Soda, the group’s Rome chief.

Yet the numbers are still high, and experts believe even more migrants may be waiting in Libya to cross, whether for better sea conditions or a less dangerous situation on shore.

The central Mediterranean crossing remains the most dangerous route across the sea, responsible for four out of five migrant deaths at sea in 2015.

Smugglers crowd migrants into rickety rubber or wooden boats that barely make it out of Libyan territorial waters before falling apart. The Italian coast guard, a key player in rescue efforts, says smugglers now give migrants satellite phones with instructions to call the service’s operations center in Rome to coordinate rescue.

Earlier this year, the EU authorized its naval force to target smugglers and destroy their boats. But without the ability to enter Libyan territorial waters — both Libya and the U.N. Security Council have withheld permission — the operation is expected to have little access to the smuggling rings themselves.

At best, the operation will divert migration flows to Europe, not prevent them, said Stefania Panebianco, a political science professor at Sicily’s University of Catania.

“Smugglers tend to adjust their routes according to conditions, the best conditions,” she said. “If there is the presence of the navy — the Italian navy, British vessels, French vessels — in the region, this means instead of crossing to Lampedusa, they’ll find other routes.”

The U.S. Navy says it is sharing intelligence with European allies but hasn’t been asked for other help, according to U.S. 6th Fleet in Naples. NATO leaders have said the migrant issue is for Europe to address, not the alliance.

The $2 billion EU aid package, intended to address economic factors behind migration, is part of a deal allowing European nations to deport and repatriate migrants back to their home countries. But some African officials have already said the amount is insufficient. They’ve also called for immigration policies allowing Africans to come to Europe legally, a call echoed by Western migration experts.

“Europe also has to start looking at legal channels for people to come,” Soda said. “Because the reality is that a West African male, even if he could contribute to the economy, has no way to get to Europe.”

Others say asylum-seekers should be granted humanitarian visas to allow them to press their case without having to risk their lives at sea.

But the Continent has little appetite for more liberal immigration policies after the influx of Syrian refugees and last month’s terrorist attacks in Paris. Countries in eastern Europe have sealed their borders, while others, like Sweden and Germany, are swamped with asylum applicants.

Meanwhile, the continued violence in Libya threatens EU on-the-ground work with local communities and organizations. Staff members with an EU border assistance mission remain in Tunisia after moving from Tripoli in July 2014 because of fighting.

Concern about the growth of the Islamic State group in Libya prompted Western nations to push for Thursday’s peace deal, under which rival factions in Tobruk and Tripoli would enter a power-sharing agreement. What effect, if any, the deal will have on migration is an open question, said Flavio di Giacomo, a spokesman for the International Organization for Migration’s mission in Rome.

“It depends on the government, if the government will actually try to stop the crossings and prevent the smugglers,” he said. “But they might be busy with other things.”