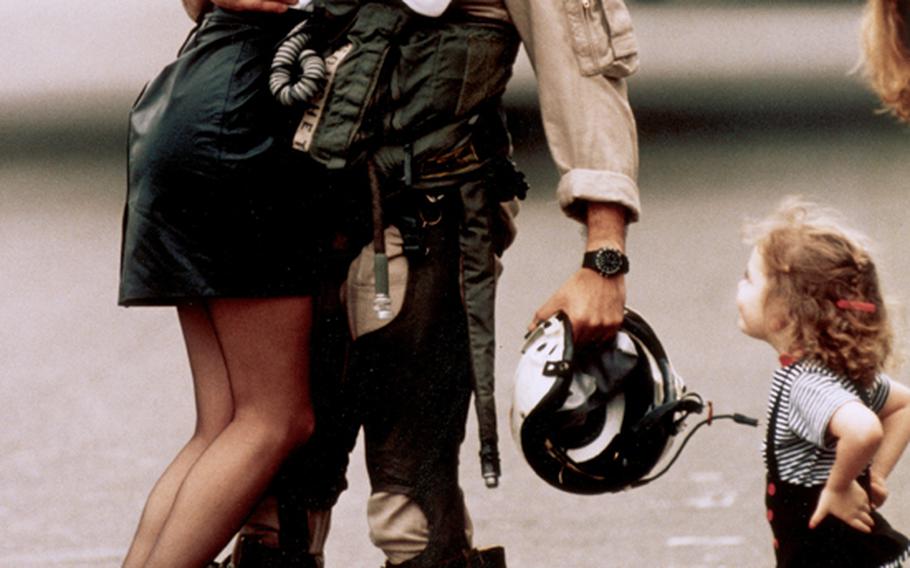 Buy Photo
Kymberly Souchet embraces her husband, Brian, as he and other pilots from the USS Midway's carrier air wing return to Atsugi from the Persian Gulf. (Lem Robson/Stars and Stripes)

Buy Photo
Kymberly Souchet embraces her husband, Brian, as he and other pilots from the USS Midway's carrier air wing return to Atsugi from the Persian Gulf. (Lem Robson/Stars and Stripes) 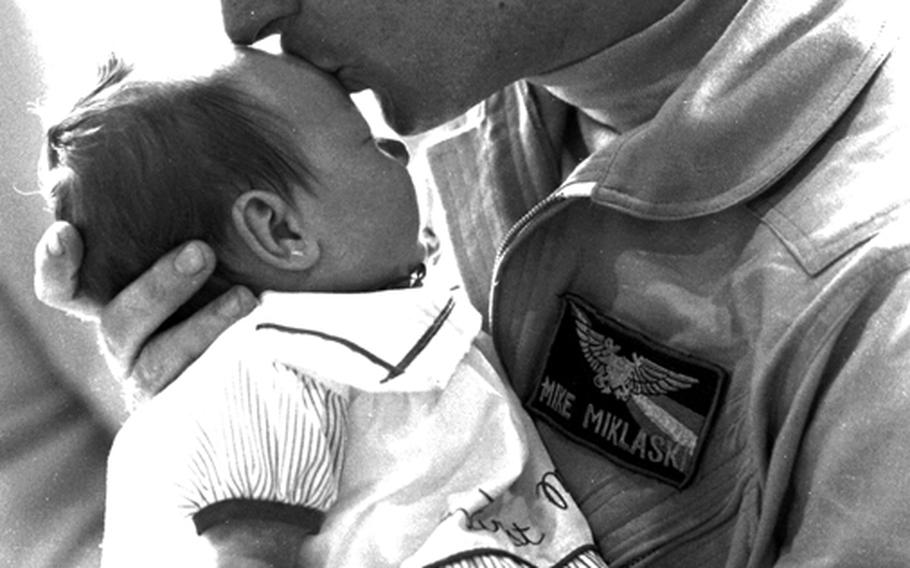 Buy Photo
Lt. j.g. Mike Miklaski meets his five-week-old daughter, Jessica, for the first time as he and other pilots from the USS Midway's carrier air wing return home from the Gulf War in April, 1991. (Rob Jagodzinski/Stars and Stripes) ATSUGI NAVAL AIR FACILITY — A volley of cheers from families and friends greeted pilots of the USS Midway's carrier air wing as the aviators flew into their home base Monday after six months of crisis and war in the Persian Gulf.

On arrival, aircraft from each of the wing's squadrons streaked above the runway low and fast, as they did on the first night of the war over Iraq when red streams of tracers flooded the sky. But on this day, three months later, the pilots peeled out of their tight formations one-by-one, then touched down, taxied to a stop and hopped out of the warplanes to embrace their waiting wives and children.

For Lt. j.g. Mike Miklaski, the homecoming meant holding his 5-week-old daughter, Jessica, for the first time. For Lt. Cmdr. Glen Hatch, an A-6 Intruder pilot, the arrival meant being on hand for the birth of his soon-to-arrive second child.

"I'm expecting any day now, so he came back just in time," a happy Virginia Hatch said of her husband.

Wave after wave of the pilots strode across a red carpet and inside a hangar converted into a decorated festival hall, with music, food, beer and champagne.

The best part of the homecoming, everyone agreed, was that all the wing's 100-plus pilots made it back safely from the Gulf. The aircraft off the Midway flew 3,400 combat missions — more than any other carrier that took part in the war.

"Every time the news said that a plane went down, my heart leapt," said Nancy Rocha, whose husband Lt. Jeff Rocha is an F/A-18 pilot. She and others felt the air wing's successes were near-miraculous.

"The best part is that today we've got all the aircraft and people that we left with," said Capt. James Burin, air wing commander.

Burin attributed the accomplishment to hard training in the three months the pilots spent flying in the Gulf before the war, as well as years of flying together.

During pre-war missions in the Gulf, "we flew low-level flights and took part in exercises with other (coalition) countries," Burin said. "That's what prepared us for the war."

Burin said only a handful of his pilots had flown into combat before Jan. 17.

"We'd planned and trained for (wary)) but there's always the unknown of combat. You can't overcome it — you just have to go in and do it. I don't think there's a guy here who wasn't scared," Burin said.

In the opening hours and days of Desert Storm, Burin said the air wing's first missions were to bomb strategic targets like airfields, bridges and power plants in Kuwait, southeast Iraq and the port of Basrah. The wing's aircraft also targeted the Iraqi navy in the northern Gulf.

"During our first missions we were opposed pretty heavily," Burin said of Iraqi anti-aircraft fire. "And we never completely overcame Iraqi air defenses."

But most of the enemy air barrages were poorly aimed, and "there was no resistance from the Iraqi air force — we never saw or got close to Iraqi" fighter jets, Burin said.

Toward the middle of the air war the wing began bombing tactical targets like surface-to-air missile sites, then switched to air-support missions when the allied ground invasion began Feb. 24.

Burin said his pilots' accuracy was pretty high. We got most of the targets we were shooting at." And while the air wing employed hightech F/A-18 jets and laser-guided bombs, the commander said that in the end, it was the aviators' skill and discipline that had the greatest impact on the air war's outcome.

"It's the pilots who made it happen, and these guys did a great job."