Midshipmen get a taste of enlisted life aboard USS Blue Ridge Midshipmen training officer Lt. j.g. Scott Lieng, right, gives instructions to midshipmen aboard the USS Blue Ridge this month. Though the midshipmen are being educated as Navy officers, the “gray-hull” cruise gives them a chance to eat, sleep and work with enlisted ranks. (Allison Batdorff / S&S)

Midshipmen training officer Lt. j.g. Scott Lieng, right, gives instructions to midshipmen aboard the USS Blue Ridge this month. Though the midshipmen are being educated as Navy officers, the “gray-hull” cruise gives them a chance to eat, sleep and work with enlisted ranks. (Allison Batdorff / S&S) 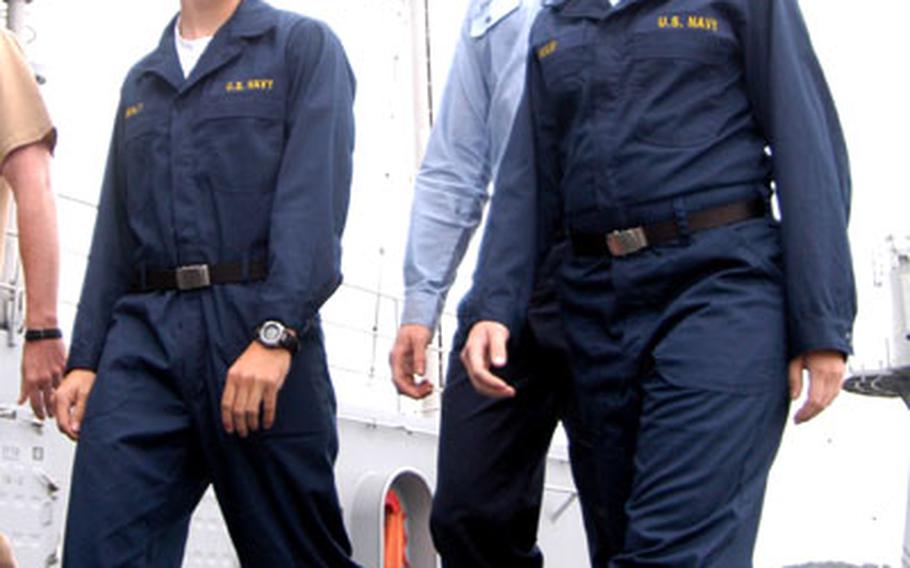 Getting a taste of Navy life from the enlisted point of view is what these 3rd class midshipmen are doing on their summer vacation aboard the USS Blue Ridge. (Allison Batdorff / S&S)

YOKOSUKA NAVAL BASE, Japan &#8212; Kirby Jones is getting used to shipboard life &#8212; though she still sometimes slams her head into the pipe hovering inches from her face at night.

&#8220;I think I have a permanent mark,&#8221; the midshipman 3rd class joked, describing her first two weeks in the top rack in an enlisted berthing compartment aboard the USS Blue Ridge.

Only one of the 21 midshipmen who reported aboard the Blue Ridge on May 24 ever has been under way on a Navy ship. All will get their chance during the monthlong fleet cruise geared to prepare the 17- to 21-year-olds, all but one from the U.S. Naval Academy, for their future jobs in the Navy.

The majority of them &#8212; 19 midshipmen 3rd class (the equivalent of college sophomores) &#8212; will get the enlisted experience on the monthlong &#8220;gray-hull&#8221; cruise, from donning uniforms to eating, working and sleeping in enlisted conditions. Though they are being trained as Navy officers, this is valuable insight, said midshipmen training officer Lt. j.g. Scott Lieng.

&#8220;We pair them up with the USS Blue Ridge&#8217;s &#8216;hot runners&#8217; (petty officers with good performance records) to learn how the ship runs from the bottom up,&#8221; Lieng said. &#8220;Some work with culinary specialists, some in engineering. The placement is random at first, but we try and specialize depending on what the midshipmen want to learn. The Blue Ridge has some diverse resources.&#8221;

Because the Blue Ridge is the Seventh Fleet command ship, Lieng was able to round up some members of the Judge Advocate General Corps and some pilots to answer questions. The midshipmen also were able to tour the USS Kitty Hawk before it left Thursday, he said.

Conor Shippee is getting his hands dirty cleaning fan rooms as he shadows a maintenance worker this week, the midshipman 3rd class said.

Their enlisted &#8220;running mates&#8221; also like to give their future bosses from-the-trenches leadership advice, they said.

The midshipmen 1st class &#8212; there are two and they are the equivalent of college seniors &#8212; shadow officers. They wear khakis, sleep in staterooms and eat in wardrooms to prepare for impending job duties after next year&#8217;s graduation.

Midshipman 1st class Colin Morrison said the Blue Ridge is the ideal place for his last cruise before graduation.

Midshipman 3rd Class Kelly Jones is looking forward to getting under way, as the Blue Ridge will make at least one port call with them aboard. They will stand watch and pull other seagoing duties, Lieng said.