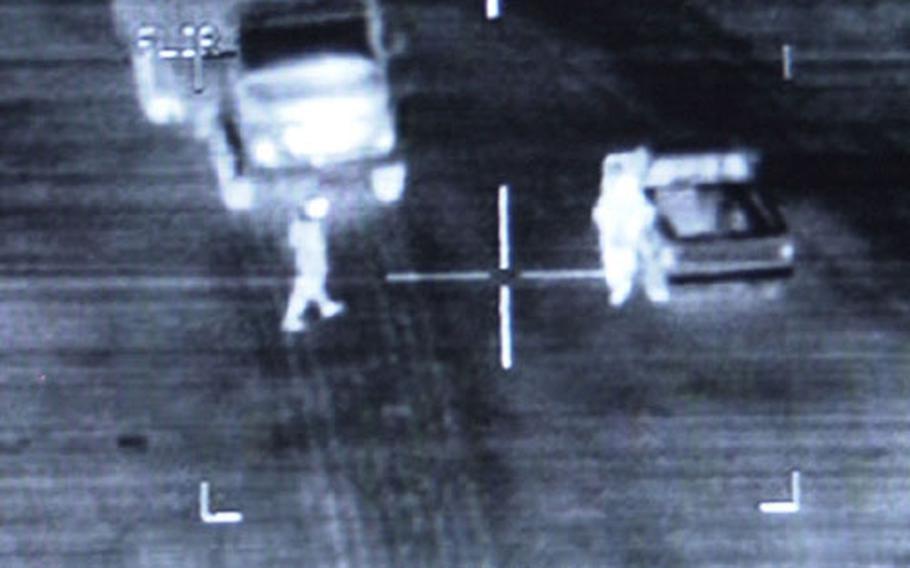 Screen shot from a video circulating among troops that depicts an attack on Iraqi insurgents. (Jim Schulz / S&S)

BAGHDAD &#8212; Troops are circulating a digitized video of a helicopter crew killing insurgents before an ambush.

The video, obtained by Stars and Stripes from an infantryman in the 1st Armored Division, was shot in December, apparently from the nose of an Apache helicopter. Three men, apparently Iraqis planning to attack coalition forces, are killed on screen.

Several soldiers said they have copies on computer memory sticks. Kellogg, Brown & Root workers have circulated the video via e-mail.

The scene begins with two men standing between two trucks. One man pulls out what appears to be a rocket-propelled grenade launcher. Both men are turning their heads to see if the coast is clear. One figure runs off into the field, plants the weapon and strolls back to his comrade.

The sound of a chain gun erupts, and one man is shredded. Literally, nothing is left of his body.

The second man dies in similar fashion. The third accomplice tries to hide beneath a truck, but pilots spot him poking his head from under a wheel.

Machine-gun rounds hit the truck, setting it ablaze. A wounded figure flops around nearby. The pilots hit the second truck, and finish the man off.

The ghostly gray scene ends quietly, as the pilots check their work and report.

Just outside the U.S. military&#8217;s Green Zone, teenage boys gather at a computer gaming center each evening for a session of guerrilla warfare.

Playing terrorists in a computer game called, &#8220;Counterstrike,&#8221; the teens operate in the mazelike streets of an Italian village armed with machine guns, sniper rifles and grenades. Using a Local Area Network, the friends join together in the virtual world to attack each other.

Shouting erupts when they find a foe, controlled in real life by a friend sitting nearby. On screen, rounds crack off and blood splatters against the cobblestones.

One boy, Jamal, 12, has become an expert at the game, after nearly two years of playing. Jamal, who lives within the protected Green Zone, likes to be a sniper, though the bazooka is his favorite weapon.

Another boy, who took the screen name Osama for his terrorist, picked the M4A1 assault rifle for his character &#8212; the same weapon issued to U.S. troops standing guard nearby.

The man running the gaming center charges the boys about $1 per hour.

Most said they play for a few hours each night. Most of the boys have learned some English, including swear words from troops standing watch at the Assassins&#8217; Gate, a U.S. checkpoint just a few blocks away.

The 101st Airborne Division sponsored a talent show for Iraqis in Mosul a few weeks ago. There were singers, poets, comedians, traditional Arabic dance groups and musicians.

The military is hailing it as a victory for democracy.

&#8220;During the old regime this never would have been possible,&#8221; said Maj. John Freeburg, assistant operations officer for the 101st.

The talent show was one of six that will be taped and shown on local channel seven, Ninevah television.

Each episode features 10 contestants or groups. The sixth show will be the final competition between the champions of the previous shows. The final show will be taped Sunday and aired at a later date.

All contestants were paid $60 by the 101st to participate.