Mideast notebook: Tires in high demand for troops in Iraq 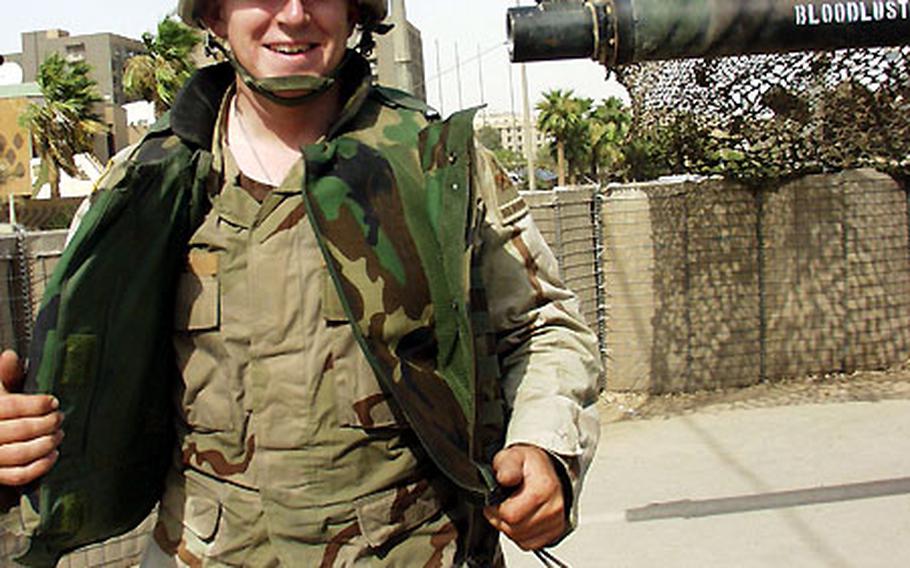 Pvt. William Beene, from Dallas, Texas, shows the sweat that has accumulated under his body armor after less than two hours manning a tank patrol Tuesday. “This is nothing, because there’s a breeze today,” said Beene, who is with the 1st Armored Division’s 1st Brigade, 1st Battalion, 37th Armor Regiment out of Friedberg, Germany. (Lisa Burgess / S&S)

Pvt. William Beene, from Dallas, Texas, shows the sweat that has accumulated under his body armor after less than two hours manning a tank patrol Tuesday. “This is nothing, because there’s a breeze today,” said Beene, who is with the 1st Armored Division’s 1st Brigade, 1st Battalion, 37th Armor Regiment out of Friedberg, Germany. (Lisa Burgess / S&S) 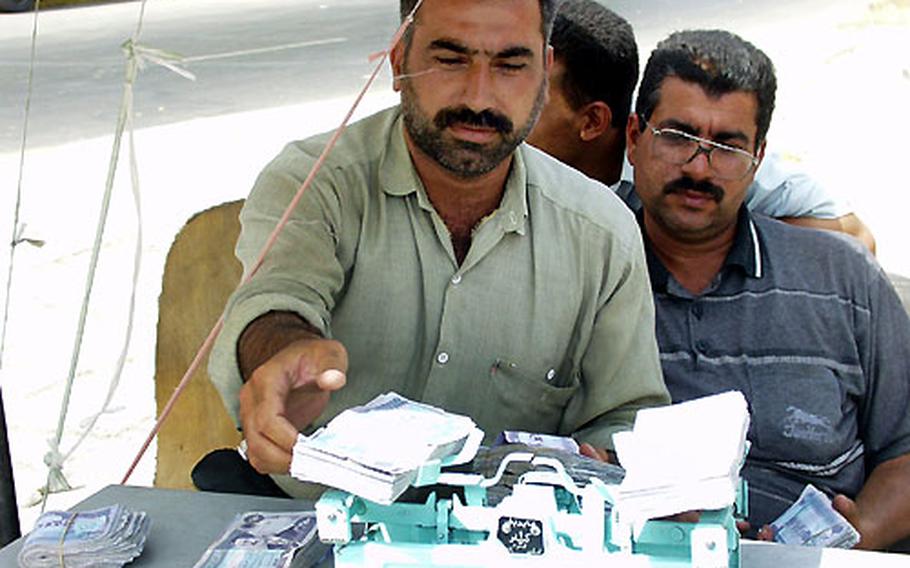 Khalid Riyad, left, and Ali Atir weigh currency on Tuesday. The dinar has lost so much value that money traders weigh the bills instead of counting them. (Lisa Burgess / S&S) 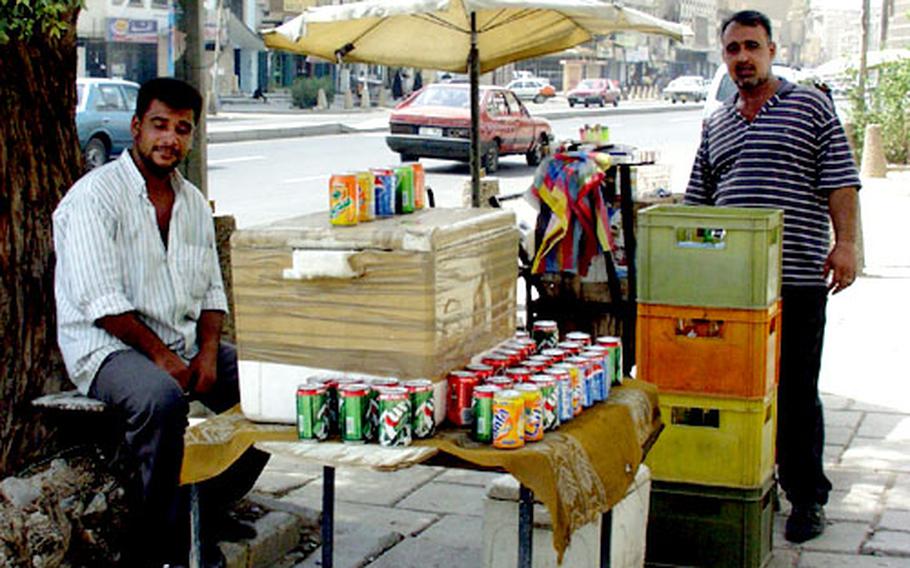 Galloway, from Springfield, Mo., said that while &#8220;the amount of mileage and the heat&#8221; are both factors in vehicle breakdowns, the generally poor condition of the roads and lots of shrapnel chew up tires at an especially fast rate.

&#8220;In some areas, guys constantly go flat,&#8221; Galloway, whose team is responsible for the care and feeding of about 150 Humvees, told Stripes.

Helicopters also take a lot of maintenance in Iraq, but for the copters, dust and dirt are the enemy. Aviation maintenance workers are meticulous about fixing every component as soon as it breaks or looks worn, according to Maj. William Howard, a Black Hawk pilot from Roanoke, Va.

Just when you thought it couldn&#8217;t get any hotter in Iraq, welcome to Ab al-ahab el limor al bismar al hab, or the &#8220;August days that are so boiling, the pins melt out of the doorframe.&#8221; Friday&#8217;s peak temperature in Baghdad was over 135 degrees Fahrenheit, with some soldiers reporting temperatures of 148 degrees in the full sun.

And in the un-air-conditioned warehouse that passes for sleeping quarters for the 2nd Squadron, 2nd Armored Cavalry Regiment, the low temperature Thursday night was 120 degrees, according to 1st Lt. Jason Tolbert, a Woodville, Texas, native who is with the squadron.

The cost of a cold can of soda in Iraq is either a bargain or costs the same as in the States, depending on where troops buy it.

At the little stores many commanders have allowed Iraqis to set up either right outside their camp gates or right inside (usually run by friends or families of translators), the going price is two cans for $1.

Unfortunately, with the spate of attacks on U.S. personnel, many troops are no longer allowed to stop on patrols to buy anything from local merchants.

Current coalition regulations allow Iraqis to drive around with up to $2,500 U.S. dollars or the equivalent of $5,000 in Iraqi dinars (which at current exchange rates would fill two large cardboard boxes).

If someone has more than that in the trunk or glove compartment, coalition forces start suspecting that the person carrying the money is up to no good. He may be a black marketer or an arms dealer, for example, said 1st Lt. Greg Lee, a Gaithersburg, Md., native who just took command of the 1st Armored Division&#8217;s 1st Brigade, 2nd Battalion, 37th Armor Regiment, out of Friedberg, Germany.

But in the absence of a fully functioning government, Iraqis can&#8217;t legally make major cash purchases, such as a house. So after analyzing local prices, coalition forces decided that $2,500 is about as much as anyone can legal spend in one trip to buy anything legal, Lee said.

The U.S. Army band Government Property is in its second week of a seven-week tour performing for troops in Iraq and in the region. The 10-member group plays a variety of music, including covers of Lynyrd Skynyrd, Garth Brooks, Guns N&#8217; Roses and Bob Marley and the Wailers.

Stars and Stripes reporter Lisa Horn contributed to this report.