Mideast Notebook: Living life on the edge in the Middle East 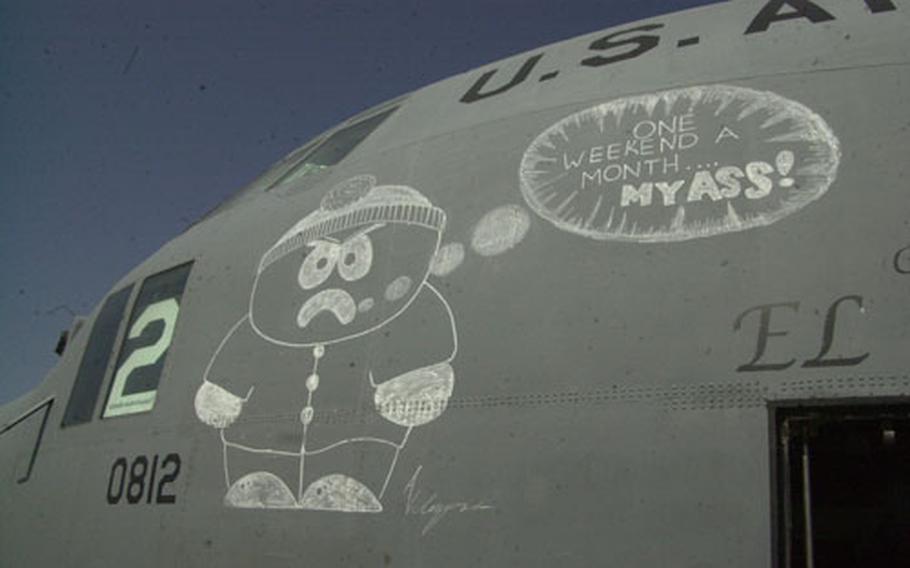 South Park&#39;s Eric Cartman, as nose art on a C-130, speaks for the crew of an Air National Guard unit deployed to Uzbekistan. The traditional recruitment slogan of "one weekend a month, two weeks a year," has become a common punchline for many deployed Reservists and Guardsmen. (Jon R. Anderson / S&S)

Between mortar attacks, roadside bombs and the ever-present threat of car bombs, many soldiers deployed to Baghdad have more than a few reasons to be on edge.

Those nerves were tested Monday at a Camp Victory dining facility when cooks cleaning up the chow lines dropped a large metal pot.

The resulting &#8220;clang&#8221; blasted through the large dining hall, causing soldiers lingering over dessert to jump and spin around to locate the source of the racket. Many automatically reached for their weapons.

&#8220;Little jumpy?&#8221; Stripes asked a soldier who had virtually levitated from the lunch table when the vessel hit the floor.

He smiled sheepishly, ducked his head, and went back to his sandwich.

When tankers attached to the Fort Hood, Texas-based 2nd Battalion, 7th Cavalry Regiment found that their main gun rounds weren&#8217;t exploding in the buildings they were firing at in Najaf, Iraq, they had to come up with a way to get the job done.

Tankers don&#8217;t use the AP shells against anything other than tanks and armored vehicles, which they aren&#8217;t facing in Iraq. Their multipurpose round can be set to explode in a ground target, such as a thick-walled bunker, or in an air burst over a target.

They found that setting the shell on ground mode would cause the round to penetrate the relatively thin walls of Najaf&#8217;s buildings without exploding, like an AP shell.

Sgt. 1st Class Bruce Highley said the soldiers discovered that when they fire the shell for air burst, the pressure created by the shell entering the room will trigger the round, allowing the tankers to successfully destroy their targets.

A cloud has been spotted near Camp Buehring, Kuwait.

The small, white, fluffy cloud was seen hovering above the laundry facility on Sunday. It is the first cloud that soldiers from the 2nd Infantry Division&#8217;s 2nd Brigade Combat Team have seen since arriving in Kuwait more than two weeks ago.

One soldier from the South Korea-based unit stared up at the cloud, apparently daydreaming, and said: &#8220;It looks like a camel.&#8221;

No TV during dinner

Many mothers might approve of the decision to pull the switch on dining facility televisions at Camp Buehring.

For the past 10 days, soldiers at the base, mostly from the 2nd Infantry Division&#8217;s 2nd Brigade Combat Team, have downed their Fruit Loops without the benefit of FOX News.

Soldiers said they were told the TV turn-off is due to the large number of personnel living at the base. No TV will mean fewer square-eyed people lingering in the chow hall and more spaces for other hungry mouths.

The TV-deprived inhabitants were dealt another blow this week when the television in the Morale, Welfare and Recreation waiting room went on the blink. The cabinet where it once rested was empty, leaving soldiers to stare at a blank piece of wall for entertainment while they waited to use the Internet.

Starved of the quality programming provided by the American Forces Network, soldiers have been forced to amuse themselves in their free time. Many soldiers have taken to playing Frisbee, soccer and touch football in the evening instead of vegetating in front of the tube.