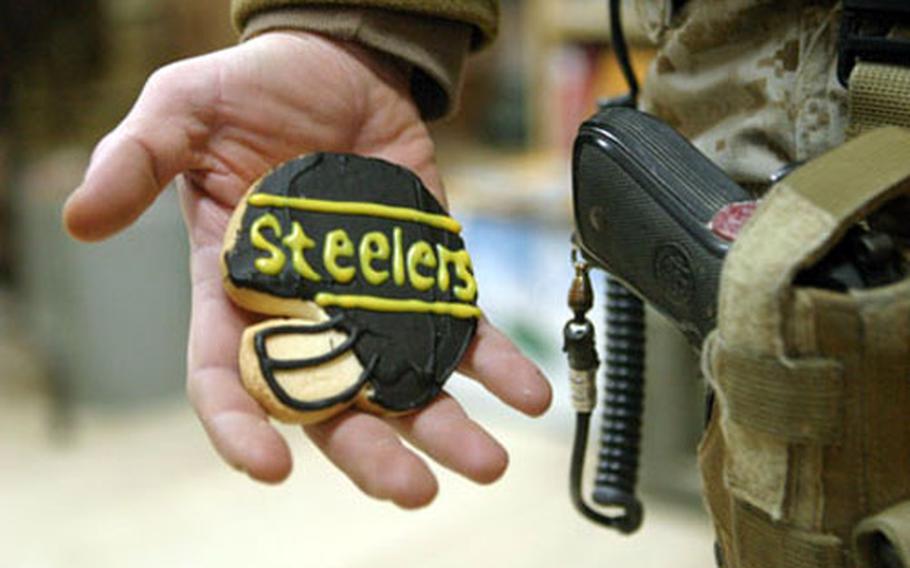 A Marine from Pennsylvania stationed at Camp Taqqadum stands with a “good luck cookie” that was sent from home to Iraq. Deployed troops and fans of the Pittsburgh Steelers and Seattle Seahawks hope their schedules will allow an opportunity to watch the Super Bowl. (Wayne Edmiston / U.S. Marine Corps)

A Marine from Pennsylvania stationed at Camp Taqqadum stands with a “good luck cookie” that was sent from home to Iraq. Deployed troops and fans of the Pittsburgh Steelers and Seattle Seahawks hope their schedules will allow an opportunity to watch the Super Bowl. (Wayne Edmiston / U.S. Marine Corps) During a break from duty at Camp Ramadi recently, Sgt. Richard Morgan, 26, of Corpus Christi, Texas, and Spc. Shane Willis, 28, of Conroe, Texas, reminisced about their early days in the Army when straight-faced superiors ordered them to retrieve such nonexistent equipment as board-stretchers, sky hooks, left-handed monkey wrenches, boxes of grid squares and cartons of chem-light batteries.

But once the pair had wised up and done their time as privates, they were more than happy to come up with a few errands of their own.

They&#8217;ve ordered naive recruits to retrieve buckets of rotor wash, crates of map legends and a thousand-yards of flight line.

Among those pointless tasks that have become part of Army lore include handing a private a ball-peen hammer and a piece of chalk and asking him to mark all the &#8220;soft spots&#8221; on the armor of a personnel carrier, or instructing a young soldier to post &#8220;aerial guard&#8221; at helicopter landing zones.

Similar gags involve handing a private a bucket of water and a paint brush and telling him that the bucket contains &#8220;infra-red paint&#8221; and that he has to cover a tank with it.

Morgan said his favorite though was when another sergeant sent a young soldier to gather a &#8220;vehicle exhaust sample.&#8221;

Garrison lifeFor all its dangers and stresses, deployment to Iraq was always good for at least one thing, soldiers said &#8212; a yearlong break from the highly regulated, toe-the-line routine of garrison life back home.

Or at least that&#8217;s how it used to be. Now, three years into the war in Iraq, more and more soldiers returning for second and third deployments complain that life on the FOB is no longer an escape from the flagpole. There are so many new rules and regulations now that some soldiers joke about trading in their boonie caps for black berets.

No chewing gum in uniform, no smoking outside of designated smoking areas, daily PT formations, and ever-lengthening rules of engagement were the primary buzz killers for soldiers, they said.

Noise pollutionThe roar of jet engines is one thing, but the whine of a surveillance drone is quite another.

Soldiers at a major military air base in Iraq&#8217;s western Anbar province say they&#8217;ve gotten used to the screaming of jet engines in the middle of the night, but what really drives them to distraction is the tiny buzzing engine of remote-controlled aircraft that are flown periodically near their living huts.

The problem for one group of soldiers who live near the drone aircraft&#8217;s runway is that operators test the toy-sized plane before missions by flying it around in circles over their huts for up to 20 minutes. Some soldiers believe the aircraft operator is just trying to annoy them by barnstorming their hooches in the early morning.

The &#8216;Geardo&#8217;Everybody knows about the Fobbit &#8212; the soldier who never travels beyond the perimeter of the FOB, or forward operating base &#8212; but what about that soldier who has to own all the high-speed tactical gear he can lay his hands on even though he too never leaves the base?