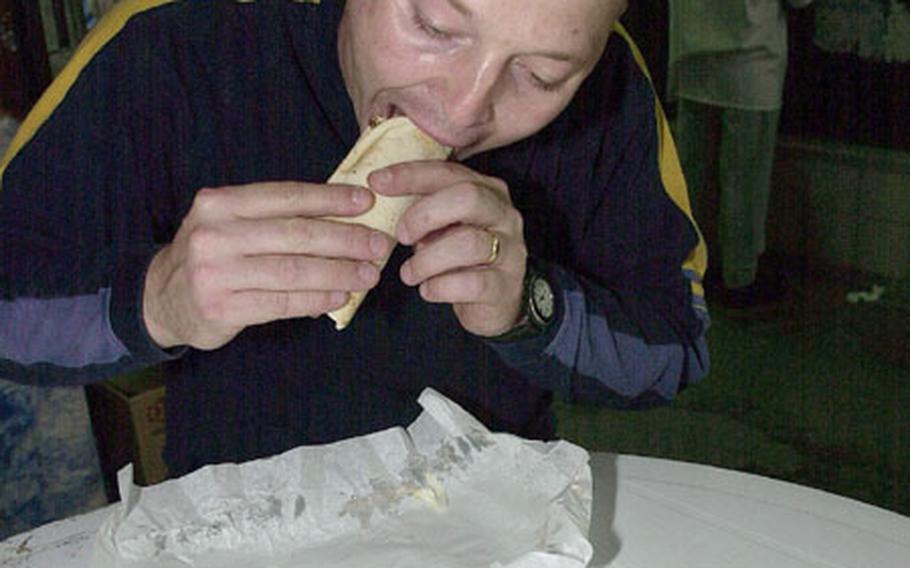 Marine Gunnery Sgt. Shannon Arledge takes a bite out of a shawarma in Manama&#39;s souq. The shawarma is becoming the hottest flavor among troops serving in Bahrain. (Mark Oliva / S&S)

Marine Gunnery Sgt. Shannon Arledge takes a bite out of a shawarma in Manama&#39;s souq. The shawarma is becoming the hottest flavor among troops serving in Bahrain. (Mark Oliva / S&S) Spc. Shavon Harris, 19, of Watterboro, N.C., is a mechanic with the 147th Maintenance Company who gets covered with grime and dust as part of her job at Camp Udairi, Kuwait. (Steve Liewer / S&S)

For troops in Afghanistan, the movie &#8220;Black Hawk Down&#8221; was on seemingly permanent loop in tents rigged with televisions and DVD players.

This time, the most popular movie for troops in Kuwait is &#8220;Three Kings,&#8221; about American soldiers whose quest for stolen gold eventually gets them caught up in the politics of the first Gulf War.

All around camps in Kuwait, soldiers can be heard quoting lines from the movie, which stars George Clooney, Mark Wahlberg and Ice Cube.

Battle for the belly

The Bush administration might be looking into winning the Iraqis&#8217; hearts and minds, but the battle for the belly is already under way.

Troops in Bahrain are passing up the likes of Pizza Hut, McDonald&#8217;s and even Subway for a more local flavor. The hottest menu item is the shawarma &#8212; a Middle Eastern sandwich that has servicemembers salivating.

The shawarma is so popular that it is sold on base. But truth be told, eating shawarmas on base is sort of like having a craving for Mom&#8217;s meatloaf and the only thing available is the chow hall.

Serious shawarma connoisseurs head to Manama&#8217;s souq &#8212; the open-air market where shoppers can get everything from &#8220;genuine-fake&#8221; Rolexes to gold sold by the ounce. Tucked back in the dark corners are shawarma stands &#8212; looking something like sausage stands transplanted from a state fair.

The shawarma is similar to a Greek gyro or a pita sandwich. It comes with choice of chicken or beef (no pork in this Muslim nation), stacked and roasted on a rotating spit and carved moments before getting stuffed into a warm flat bread with tomatoes, onions, hot sauce and a chili pepper that bites more than any border sauce found at the local taco stand.

The entire sandwich is layered and covered with a sauce, the contents of which might be some long-held Bahraini secret. Rolled up, served hot alongside a freshly blended strawberry-banana blend shake, Marines and sailors can&#8217;t get enough.

Two shawarmas, two blended shakes and an alley-side seat at a plastic picnic table runs about one dinar &#8212; roughly $3.

At the camps in Kuwait, soldiers are lucky enough to have pleasant, climate-controlled shower rooms, equipped with hot water. Any soldier will say a shower feels terrific in a place like this.

There isn&#8217;t a lot of water, though, so the Army has placed some limits. Soldiers can&#8217;t leave the tap running when they shave or brush their teeth. Army members must take a &#8220;Navy shower&#8221;: Wet themselves down quickly, shut the water off to lather up, turn the water on again to rinse off. If an officer or senior noncommissioned officer catches someone violating water etiquette, he is likely to earn a serious chewing out.

Soldiers are limited to one shower every three days. That&#8217;s not bad for those with an office job. But what about the troops with dirtier jobs such as those in the 147th Maintenance Company from Kitzingen, Germany, who do heavy truck repair for the 7th Battalion, 159th Aviation Regiment?

These soldiers roll around under vehicles in the desert dust. By the end of the day, they are covered with grease and grime and sand.

Luckily, the command seems to be cutting these soldiers some slack.

Her commander is Staff Sgt. Johnny Dinanno, 38, of Brooklyn, N.Y. He looks out for his troops when it comes to matters like this.

Soldiers across Kuwait have been shedding weight, and it has nothing to do with diet or exercise. It is no secret that most of the 3rd Infantry Division and V Corps troops hunkered down at military posts in the Kuwaiti desert will be heading north right away if war breaks out. Since all their gear and supplies must be carried in the units&#8217; trucks and Humvees, Army commanders have ordered everyone to get rid of everything they don&#8217;t need.

Getting light is not much of a problem for the tens of thousands of troops who have arrived in Kuwait this month. It&#8217;s a somewhat bigger burden for units such as the 2nd Squadron, 6th Cavalry Regiment and the 7th Battalion, 159th Aviation Regiment&#8217;s Company A. Soldiers in those units have gathered goods like a ship gathers barnacles during their 4&#189;-month desert stay.

Now is the time to ship home those extra DVDs and books. Some will be sending clothes, linens, shoes, even TV sets. Other gear will go into cargo containers to be retrieved later. The 2-6 Cavalry has stowed the weight room equipment that has made it the envy of Camp Udairi.

It&#8217;s a sign this is serious business. When the soldiers see their stuff again, more than likely they will be combat veterans.