Mideast-bound MSC cargo ship has its ups and downs 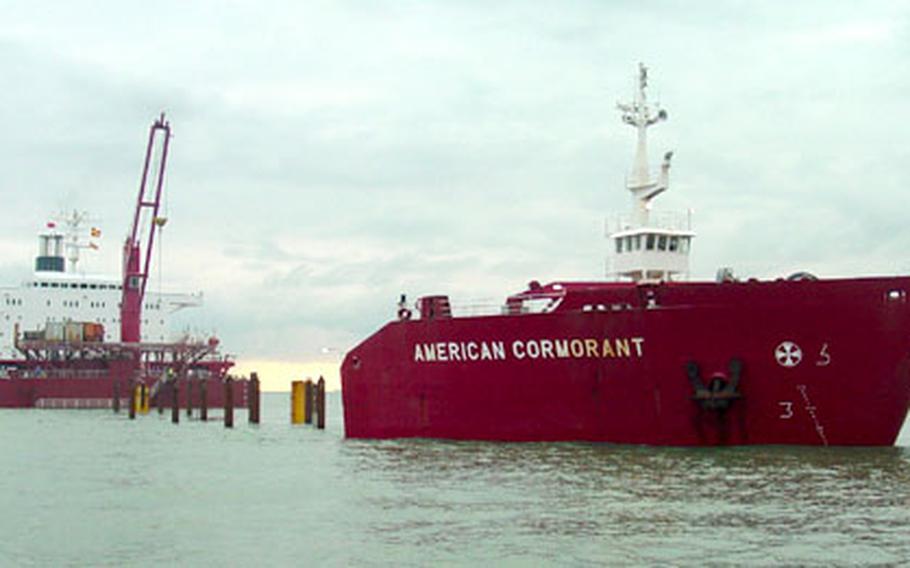 The Cormorant is a float-on/float-off ship, which has a unique capability of partially sinking to take on its floating cargo. Once the cargo is in place, the 738-foot, 71,000-ton ship floats back up to the surface.

The MSC-chartered vessel is designed to transport small watercraft for the U.S. Army.

The ship&#8217;s trip began in Dakar, Senegal, early last month, where &#8220;cradles&#8221; for the equipment were installed on her main cargo deck. The ship then sailed to Rotterdam, the Netherlands, where guideposts were welded on the deck.

The equipment, which came from the nearby Army Field Support Battalion at Hythe, is part of the Army&#8217;s pre-positioned port opening package. The equipment helps the Army to open a port where normal facilities may have been damaged or destroyed.

The ship sinks in the same manner as a submarine &#8212; it takes on water as ballast, which causes the ship to sink. Its main deck can sink to 26 feet below the water&#8217;s surface, with only the ship&#8217;s front forecastle and back superstructure remaining above the water.

It takes about six hours to sink and another six to re-float American Cormorant.

American Cormorant was built in 1975 in Sweden as an oil tanker. In 1982, it was modified as a semi-submersible and used to carry offshore oil rigs.

Since then, the American Cormorant has carried British landing craft for the war in the Falklands, and supplied equipment to U.S. forces in Somalia in the early 1990s. Another MSC-chartered float-on/float off ship, M/V Blue Marlin, was used to carry the damaged destroyer USS Cole to the United States from Aden, Yemen, after Cole was attacked in Oct. 2000.