Microchips on bins monitor what U.K. residents are recycling Every bin in its place, and a place for every bin. (Bryan Mitchell / S&S)

Every bin in its place, and a place for every bin. (Bryan Mitchell / S&S) 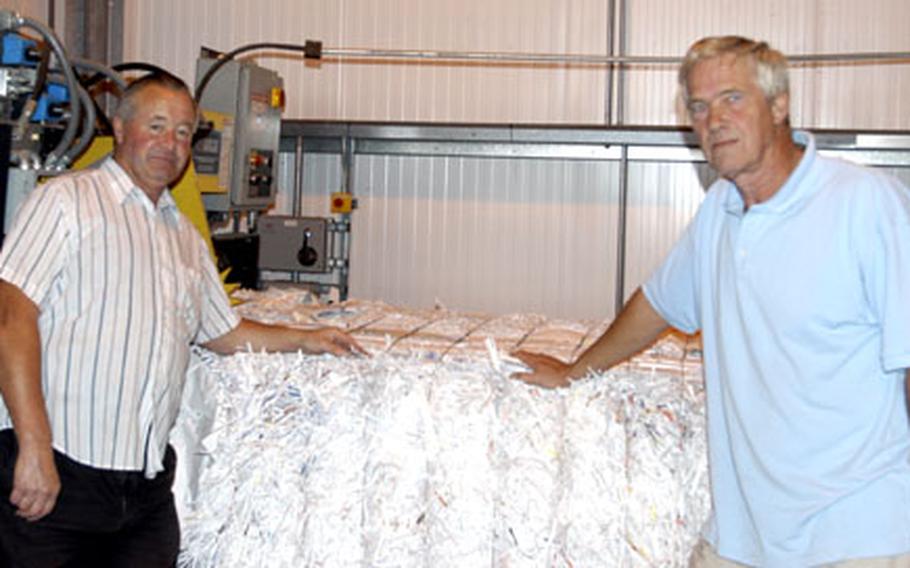 Brian Giles, left, and Rod Barrett, stand next to a bundle of shredded paper set to be recycled. The two British men work at the RAF Lakenheath recycling center as employees of the Ministry of Defence. (Bryan Mitchell / S&S) 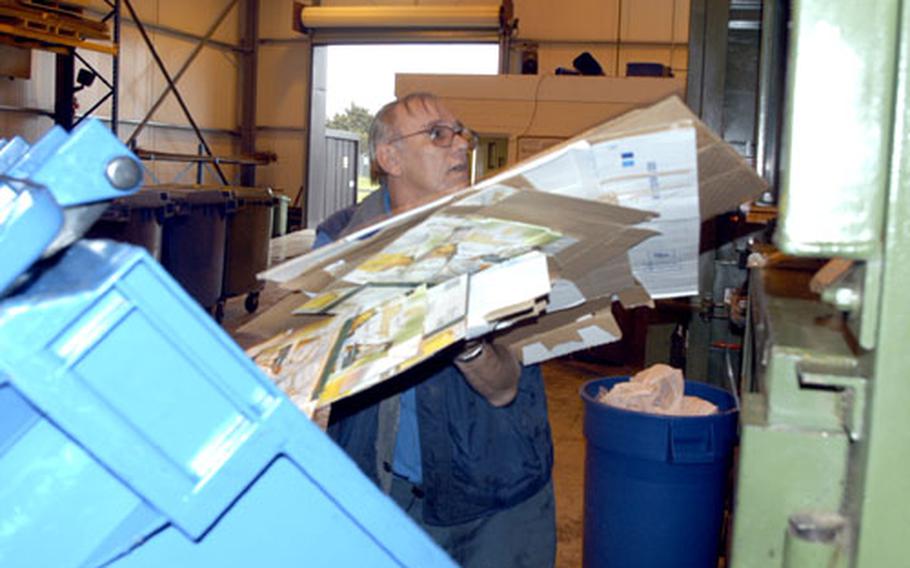 Robert Pool loads a pile of cardboard into a compactor at the RAF Mildenhall recycling center. (Bryan Mitchell / S&S) RAF MILDENHALL &#8212; A move by the British government to measure recycling and trash collection has been met with a mixed response by American military families and the British contractors who recycle base waste.

Some fear computer chips installed on recycling and rubbish bins to measure the amount of goods recycled and sent to landfills is an invasion of privacy. Others welcome the program as a way to promote increased environmental action.

The microchips have been installed in bins by municipalities across the United Kingdom, including the Forest Heath District Council, which includes RAFs Lakenheath and Mildenhall.

Forest Heath&#8217;s bins, however, have yet to measure waste and recycling, as the council lacks the proper technology, and it&#8217;s unclear when the chips will be activated, according to council spokeswoman Sally Rode.

The program drew the ire of civil libertarians, partly because many municipalities, including Forest Heath, did not inform constituents of the plan. Its advocates, however, contend the program is vital to bringing the United Kingdom in line with other European countries for the amount of waste recycled.

Melissa Callais, who lives in RAF Mildenhall on-base housing, says her family recycles about 50 percent of their household waste, and believes the microchips aren&#8217;t a reason to worry.

Ministry of Defense employee Robert Pool, who manages the on-base recycling program at RAF Mildenhall, said he feared the Orwellian element of the chipped bins.

His counterpart at RAF Lakenheath, Rod Barrett, voiced concern that the local council installed the chips without notifying residents.

Many of his countrymen agree, and there have been several reports in the British media of people removing the chips as an act of protest. A Sept. 10 story in The Mail, one of London&#8217;s leading daily papers, reported that roughly 25,000 chips have been unscrewed and removed by residents in Bournemouth Council in the south of England.

The Forest Heath District Council, however, asserts the program has helped make the council one of the best in the country for recycling and that it had no obligation to inform resident of the chips.

That includes the bins on the Royal Air Force installations which host U.S. Air Force units, where the council&#8217;s garbage men collect garbage and recycled goods from on-base housing.

The East Anglian Housing Office on RAF Lakenheath as well as the 100th Civil Engineering Squadron were not informed of the program, according to an RAF Mildenhall spokesman.

Capt. Jamie Humphries said neither office was overly concerned over the chipped bins.

Neither is Danielle Long, who says moving to England has significantly increased her family&#8217;s recycling habits.

The Long family has become so proactive that their 20-month-old daughter, Cami, also takes part in the green program.

&#8220;She knows the diapers go in the trash can with the lid and that pieces of paper or candy wrappers go in the other bin,&#8221; she explained while holding her daughter.

Staff Sgt. John Golightly, 25, of Mount Pleasant, Texas, also said he has no problem with the bins being chipped without his prior notice.

But Pool fears the councils will soon use the data to create a tax on waste.

Recycling, by the numbers