MICLIC clears the way for soldiers in exercises 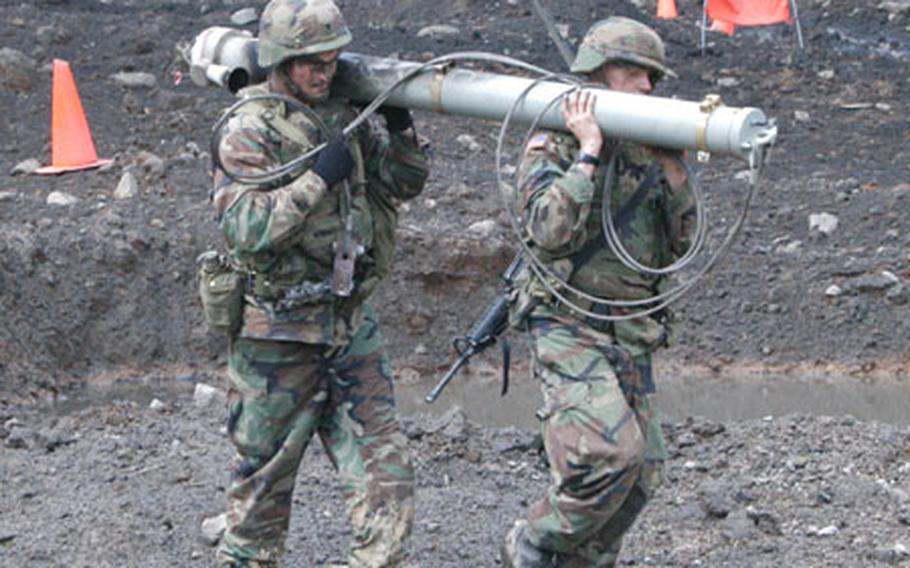 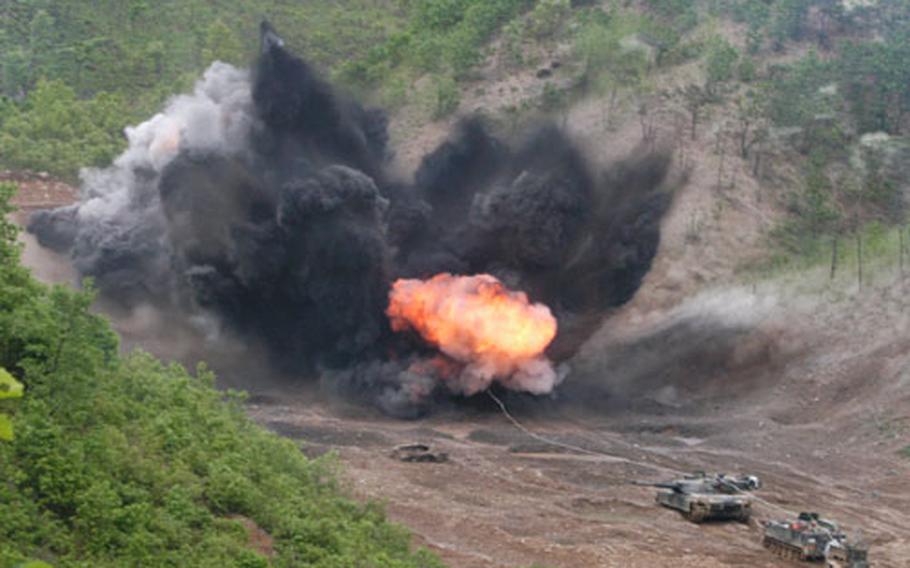 Before the MICLIC was put into action, an M1A1 Abrams Main Battle Tank moved up to find the front end of the minefield. It was equipped with a plow to deflect explosions in case it ran over a mine, but the crew spotted the mine field before that happened.

The man directing the operation, Capt. Brian Smith, commander of Company C, 2nd Engineers Battalion, said it&#8217;s better not to detonate any mines before the MICLIC goes off. A premature explosion could alert the enemy to what is happening.

Once the tank crew members spotted the minefield, they reversed their vehicle and an M-113 armored personnel carrier towed the MICLIC into position.

Smith said the MICLIC &#8212; capable of clearing large sections of the minefield or other obstacles mechanically &#8212; reduces the risk to soldiers.

It claims the highest attrition rate in most battles, Smith said. &#8220;Life expectancy at the breach is very low.&#8221;

The infantry trains hard to suppress the enemy with support fire, obscure enemy troops&#8217; vision with smoke, secure the area where a breach will occur, reduce the obstacle and assault through it, he said.

During a MICLIC operation, the soldiers firing and detonating the anti-mine charge are protected inside an M-113, Smith said. They have to get out of the vehicle only if the long strand of explosives comprising the MICLIC gets tangled.

Before that strand was fired Thursday, all Company D infantrymen fighting nearby were accounted for to make sure nobody was in the danger zone.

Soldiers within about 100 feet of the MICLIC must be inside an armored personnel carrier. The fragmentation zone extends more than 650 feet back and almost half a mile to the left and right of the blast, Smith said.

Inside the M-113, Staff Sgt. Brian Emerson held a control box and talked to his commanding officer over a radio. When the order was given, he threw a switch to raise the MICLIC&#8217;s rocket to 47.5 degrees, then turned a dial to launch it.

The rocket swooped over the M-113 and the Abrams, dragging what looked like a fire-hose to the end of the valley. A moment later, 1,800 pounds of C4 explosive strung with detonation cord and blasting caps lay down the middle of the minefield.

Then, Emerson turned the dial to detonate the MICLIC and a huge fireball spread across the minefield, followed by a shock wave and a thunderous blast sending black smoke skyward.

&#8220;We definitely cleared what we wanted to clear. All the concrete mines were thrown out of the way,&#8221; Emerson said.

In the aftermath, soldiers scrambled over a blackened landscape where the MICLIC detonated, placing red flags signaling the lane cleared by the massive explosion. The path was open for the rest of the battalion to push through.