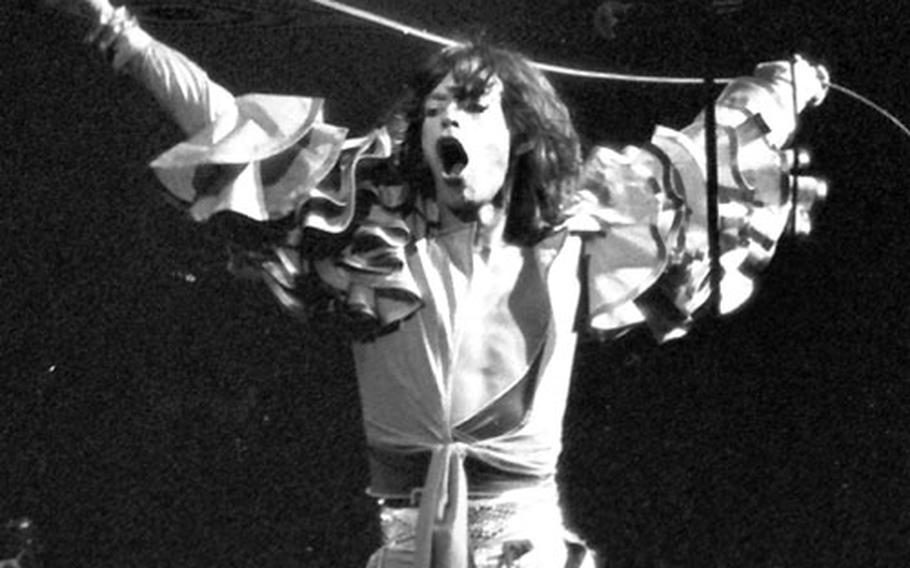 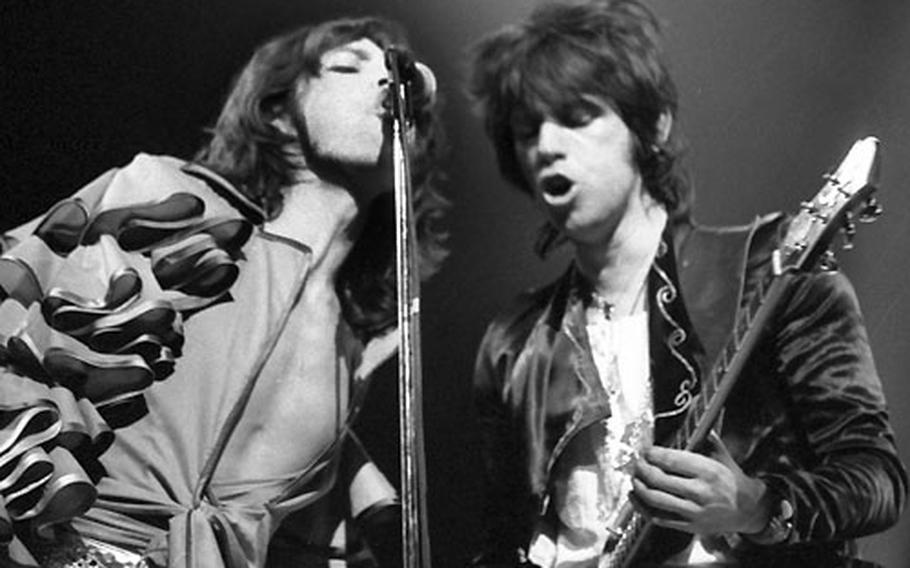 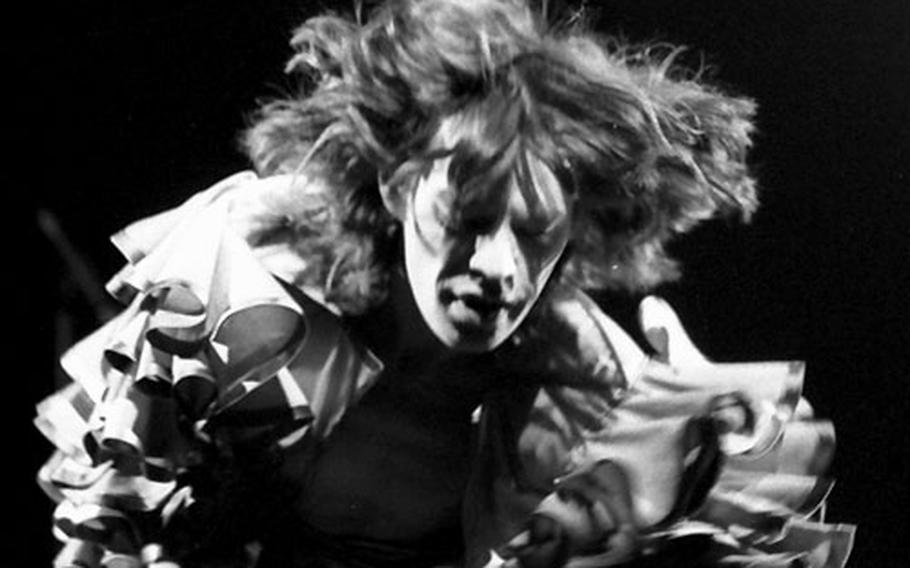 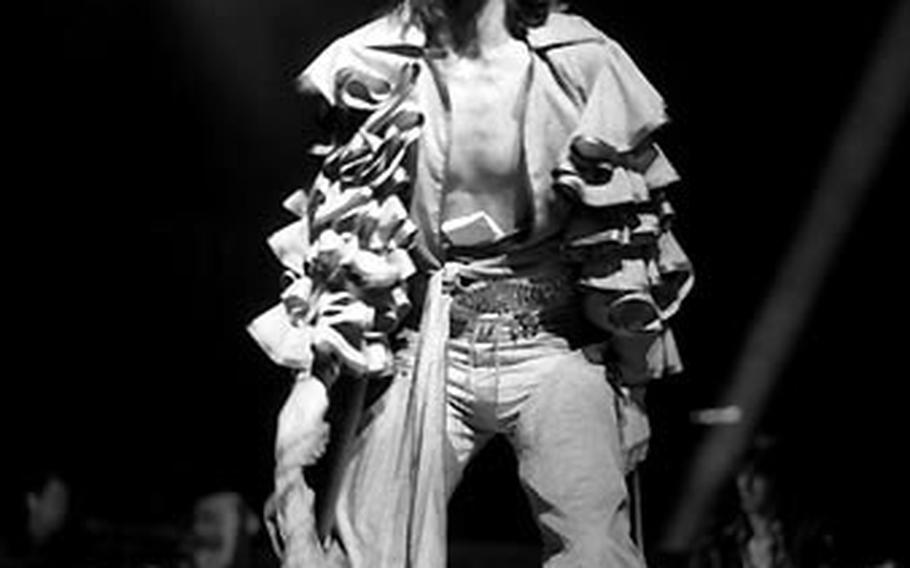 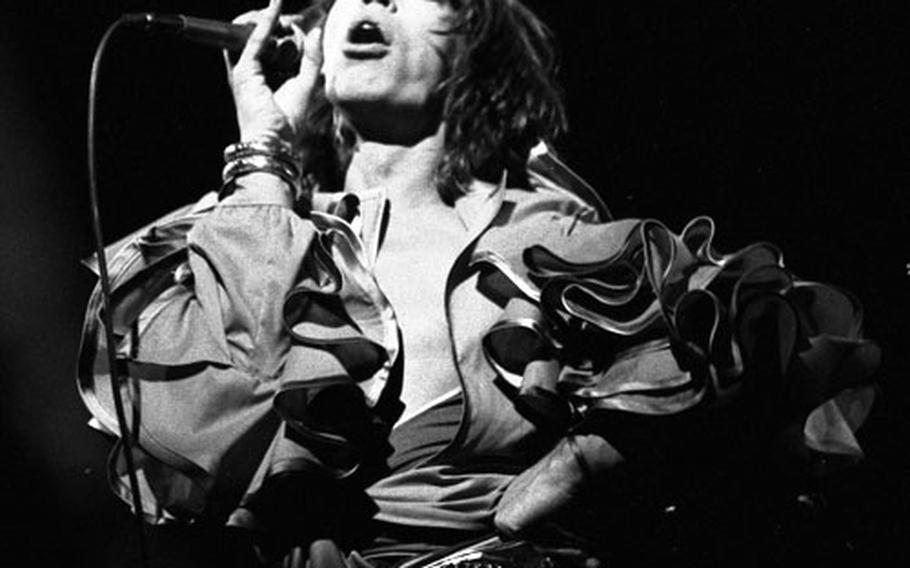 FRANKFURT &mdash; Like the "Street Fighting Man" said: "What else can a poor boy do, except sing in a rock 'n' roll band?" ... and become filthy rich!

Despite the deepening crow's feet around Mick Jagger's eyes and a slight loss of vitality to his prancing and posturing, he's living proof that while rock 'n' roll may be flash, it doesn't have to be flash-in-the-pan.

The 32-year-old "king bitch of rock," as Time magazine dubbed him, is lead singer and focal point of the fantastically successful Rolling Stones.

With his mousey brown hair and pale complexion, Jagger stormed into Germany on the Stones' first European tour since '73. They succeeded in filling the 11,000-plus capacity Frankfurt Festhalle on two successive nights and tied up traffic in the vicinity of the fairgrounds for several hours during their engagement.

Clearly, Jagger is the superstar of the show in every sense. He strutted on stage like a peacock, garbed in a red and green, jumpsuit slit to the waist to reveal a hairless, sweaty torso. In front of the stage, the crowd pressed together, packing the chairless center floor, bobbing to the music, mimicking Jagger's gestures as he waved his fingers and clapped his hands.

In a raspy, shouting baritone, coupled with the usual upfront stomping and screaming, Jagger conveyed a raw sexuality and exhilarating urgency that sent his huge following into frenzied, wild ecstacies. The greatest response came with oldies such as "Honky Tonk Woman" and "Nothing From Nothing," though in the all-prevailing interest of economics, the band included such new tunes as "Hand of Fate" to promote its just-released Munich-recorded LP "Black and Blue."

The equipment onstage surely rivaled the weight of 40 elephants. It included an array of speakers that truly were deafening. It took at least a small army to move it all about. A battery of light projectors, aligned like cannons behind the speakers onstage, beamed intense white and yellow on a mirror of Mylar plastic suspended high above the crowd. The mirror, an invention of Chip Monck, the Stones' lighting director, fed the light back on stage so that the musicians were bathed in its intense glow.

There had been a so-so warmup U.S. act, the five-member Meters, who had opened some Stones' Stateside shows last year with their tight, soulful sounds.

But clearly the fans were Stones oriented. Lead guitarist Keith Richards is the musical heart of the band, a tremendous unit, peopled by capable soloists: Charlie Watts on drums, Bill Wyman on bass, and new face Ron Wood on rhythm guitar. Assisting the Stones on tour are wildly Afro'd pianist Billy Preston and Ollie Brown, percussionist.

Once merely a funky alternative, the Stones today &mdash; in terms of world popularity &mdash; are the successors to the Beatles. Now well into their second decade as rockers, what's left for "the world's greatest rock 'n' roll band"?

With all due respects to the roots, are the Stones all the rock world has to offer until the "third coming" is upon us?

What has happened to rock 'n' roll? Has it begun to stagnate? Where are the innovators, the new Presleys, Beatles and, yes, the new Stones?

Rock music originally spawned a whole new counterculture; it had meaning once. To the youth of the 1950s and '60s it was a way to thumb their noses at the Establishment, at one's parents, at conventions; as a protest against war, the crackdown on drugs, poverty, segregation ...

But where is the idealism now? Has it merely boiled down to practicality &mdash; to making money? It seems more and more to be just another commercial ripoff on which the fat cats thrive.

To scrape in more of the green stuff, the Stones have even deserted their homeland to avoid Britain's high income tax and they limit their bookings to big stadiums like the Festhalle, where they can lure larger crowds. As a consequence, their appearances have become more like sports events than concerts.

And what of their future? They've produced little that's new in recent years. Their last year's album was a disappointment at best.

Their original fans are now well into their thirties and prefer getting off to their records than mingling with the blue-jeaned, shaggy-haired mob that attends their concerts these days. Meanwhile, one wonders if the crowds are attracted more by curiosity than devotion to their music.

"I don't feel responsibilities other people feel," says Jagger. "Obviously being in a rock band makes you more adolescent than if you worked in an IBM company and really had to worry about your future. I don't worry about the future. I'm living out my adolescent dreams perpetually. "

But how much longer will rock-lovers be content to shell out $10 a ticket for standing-room-only to see an aging Mick Jagger with his tiresome unisex image performing Golden Oldies cranked out good and loud?

Is that all there is?