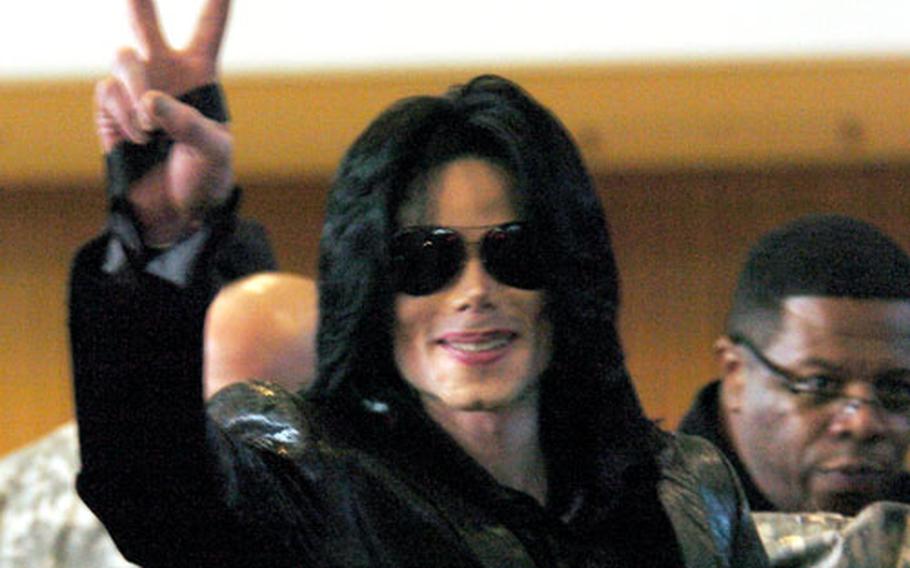 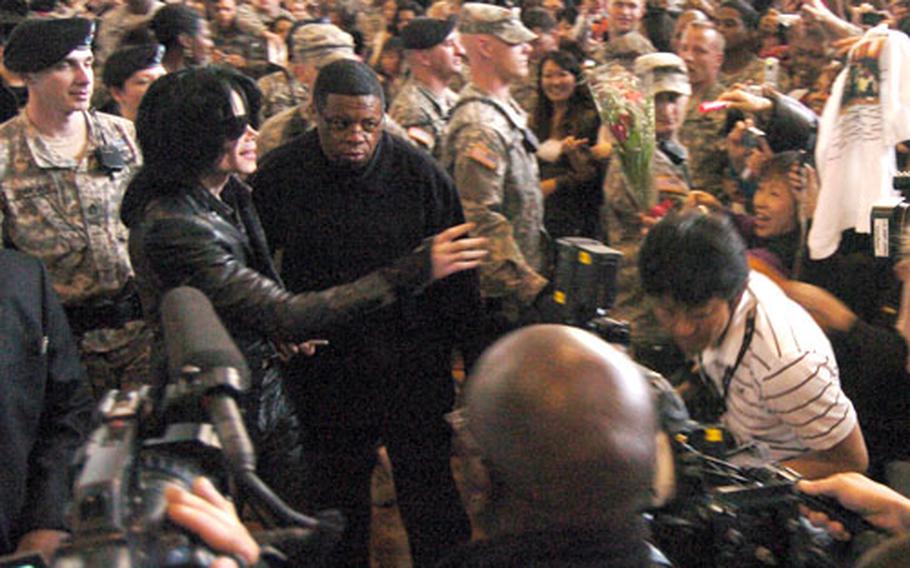 Michael Jackson, amid the frenzy at Camp Zama. (Christopher B. Stoltz / S&S) 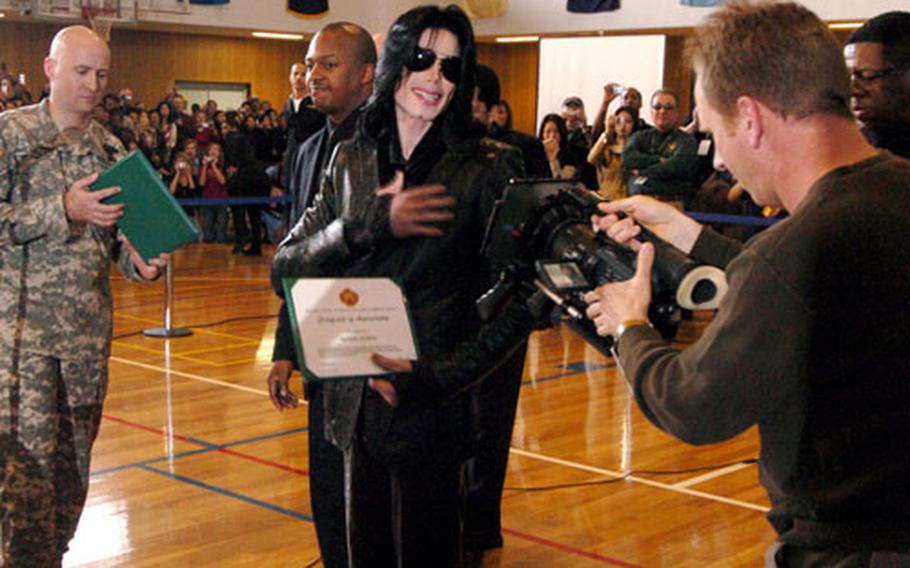 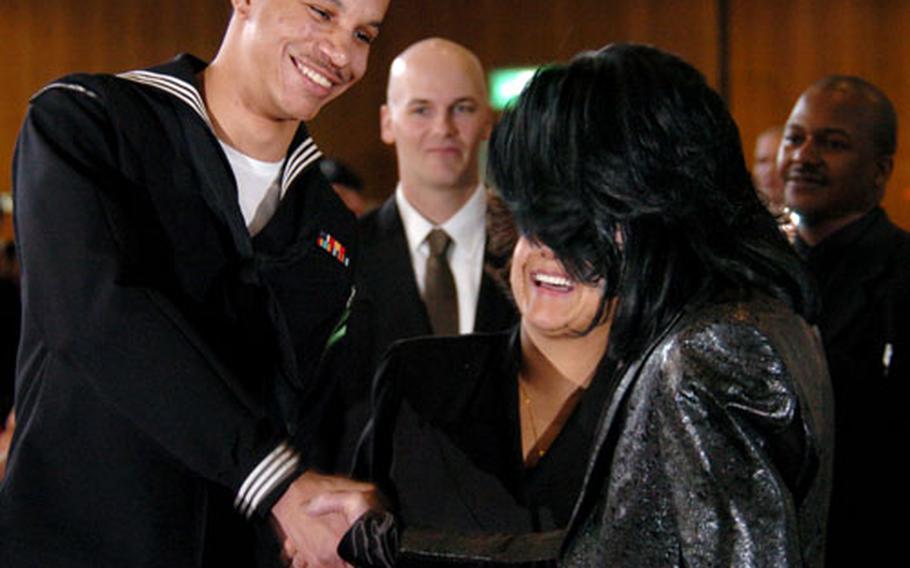 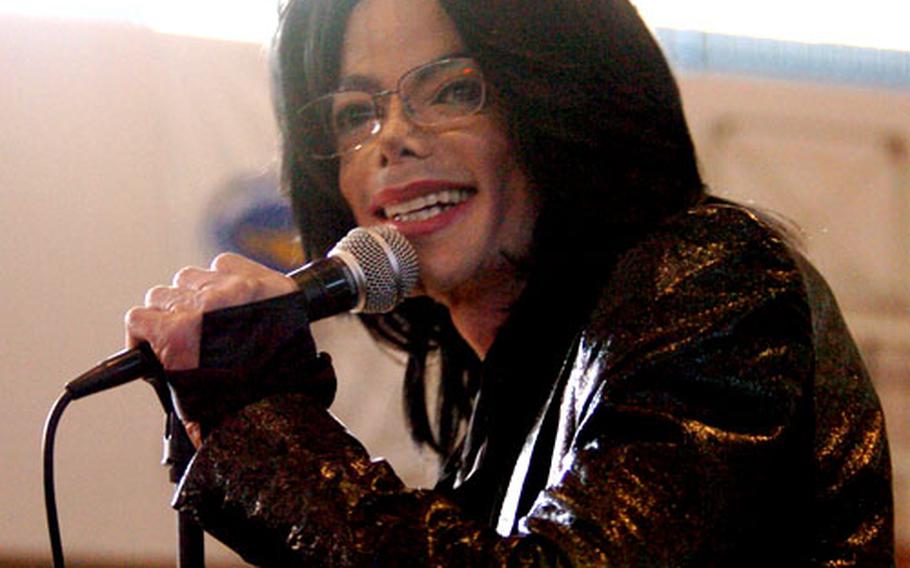 Michael Jackson speaks to his fans at Camp Zama. (Christopher B. Stoltz / S&S)

Michael Jackson thrilled U.S. troops, their families and Japanese base employees with a brief but electric appearance at the Yano Fitness Center.

Screams erupted and camera flashes lit up the gymnasium when Jackson entered shortly after 3 p.m. People stood and flocked toward the roped-off stage, straining for a glimpse of the pop icon.

&#8220;It&#8217;s an honor and a privilege to be here,&#8221; Jackson told the audience. &#8220;You people are among the most special in the world because you have chosen a life of service. Because of you here today and others who have given their lives, we can enjoy our freedom at home. I thank you from the bottom of my heart. And I love you.&#8221;

The legendary gloved one did a giant loop around the stage. He waved, smiled and blew kisses at fans huddled against the barrier. Then he was ushered away.

He may not have stuck around very long &#8212; the entire stop lasted about 10 minutes. But hey, it was Michael Jackson. &#8220;I got two wishes before I die: See Mick Jagger and Michael Jackson,&#8221; said Walter Sampson, a retired petty officer first class who works at Yokosuka Naval Base and brought his family from Yokohama on Saturday. &#8220;Now all I gotta do is see Mick Jagger and I&#8217;ll be the happiest person in the world. &#8221;

At a VIP party in Tokyo last weekend, hours after Jackson arrived in Japan, guests paid $3,500 for 30 seconds to one minute of face time with him.

Senior Airman Raphel Lucas, 22, said he wouldn&#8217;t go quite that far but there&#8217;s probably not much else he wouldn&#8217;t do for a chance to meet his idol. He and wife Maria made the hour-plus drive from Yokota Air Base on Saturday.

Ashlee Hempstead, a sophomore at Zama American High School, said she got some good photos of him.

After learning about the visit on Friday, Petty Officer 3rd Class Ali Elazhari, 22, joked that he &#8220;got all excited like a little girl.&#8221;

Petty Officer 3rd Class Melinda Ray, 25, said the Jackson event was billed as a 40-minute meet-and-greet with servicemembers, but that&#8217;s not what it turned out to be.

&#8220;He came out and talked for seven minutes, then left,&#8221; Ray said. &#8220;It was pretty exciting that they got him to come here, but it was kind of a letdown because they advertised something different. I can&#8217;t believe that many people showed up.