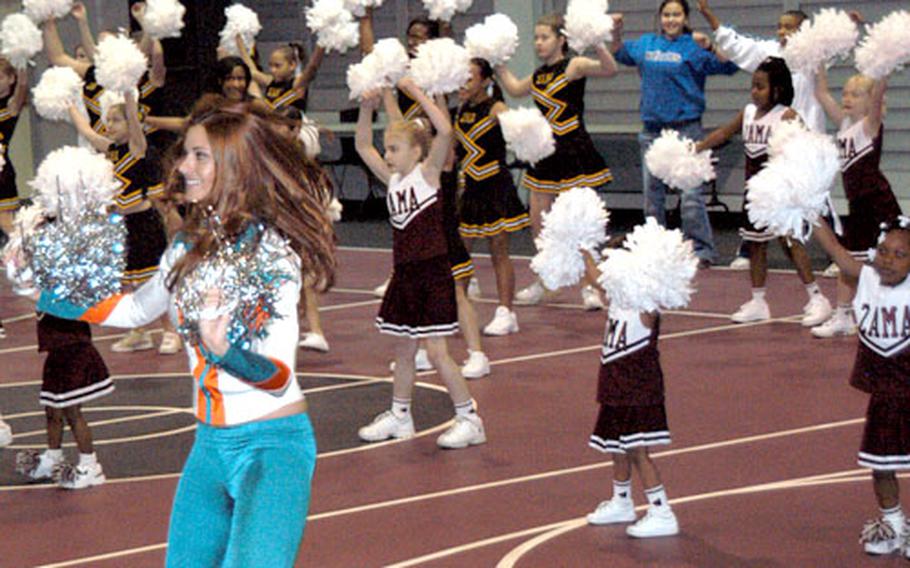 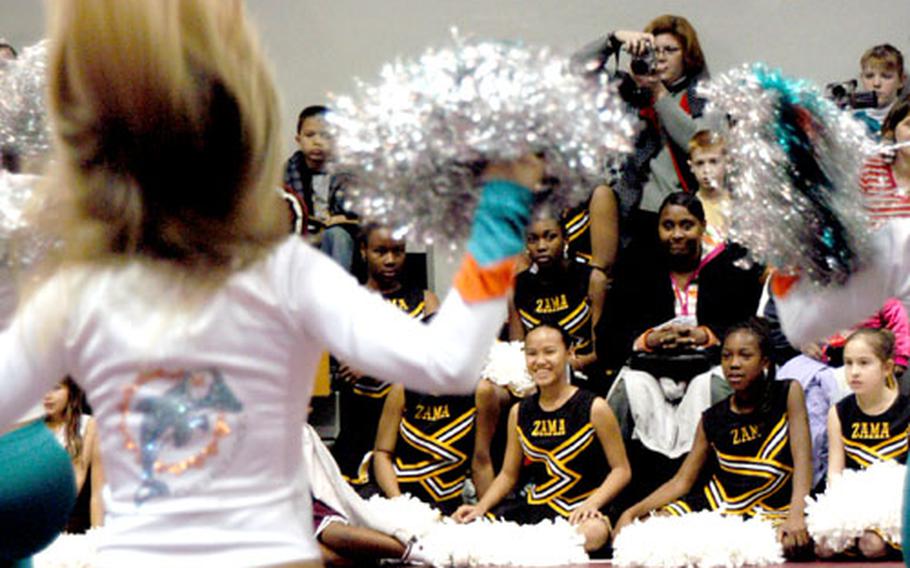 Miami Dolphin cheerleaders perform for their young counterparts from the Zama American High School and the Youth Center cheer squads during a cheerleading performance and clinic. (Juliana Gittler / S&S)

CAMP ZAMA, Japan &#8212; Members of the Miami Dolphins Cheerleaders team whirled into the Camp Zama Youth Center under a flurry of pompoms to dazzle and drill the two dozen or so kids and teens attending a short cheer workshop and performance.

After spending time with troops at the Super Bowl party Monday, the six visitors performed briefly then held the cheer clinic for the Youth Center cheerleading teams and Zama American High School cheerleaders.

They taught the youngsters a few dances and encouraged them to smile and shake their pompoms.

The visit gave the young girls new ideas, a ton of encouragement and the thrill of seeing celebrities in the flesh.

While not all gathered want to be cheerleaders when they grow up, the visit helped many hone their skills.

Danielle Tomaka and Alexandra Sokol, fourth-graders at Sagamihara&#8217;s Arnn Elementary School, liked that the cheerleaders performed for them and danced alongside.

The youngsters also did a few routines for their visitors.

The six Dolphins cheerleaders are touring Pacific bases as part of an Armed Forces Entertainment tour.

This year, the group added youth cheerleading workshops to their usual performances and morale stops.

The cheerleaders work with children and teens in Miami, so the clinics are old hat, said the group&#8217;s director, Heather Phillips.

The 36 cheerleaders on the team compete for one of the six spots on the military base tours. They usually stop at locations where troops serve without families, but this time, they had a chance for more community involvement, Phillips said.

That is part of what made the event go so well, said Bob McKeta, director of commercial sponsorship with Zama&#8217;s Morale, Welfare and Recreation.

He had asked that Camp Zama be part of the next tour of visiting professional cheerleaders after reading about a cheerleading team&#8217;s visit to another base during last year&#8217;s Super Bowl. Once the visit was settled, the team said it could offer a teen clinic. The Youth Center, welcomed the event, McKeta said.