Metzger mystery leaves troops in Kyrgyzstan confined to base 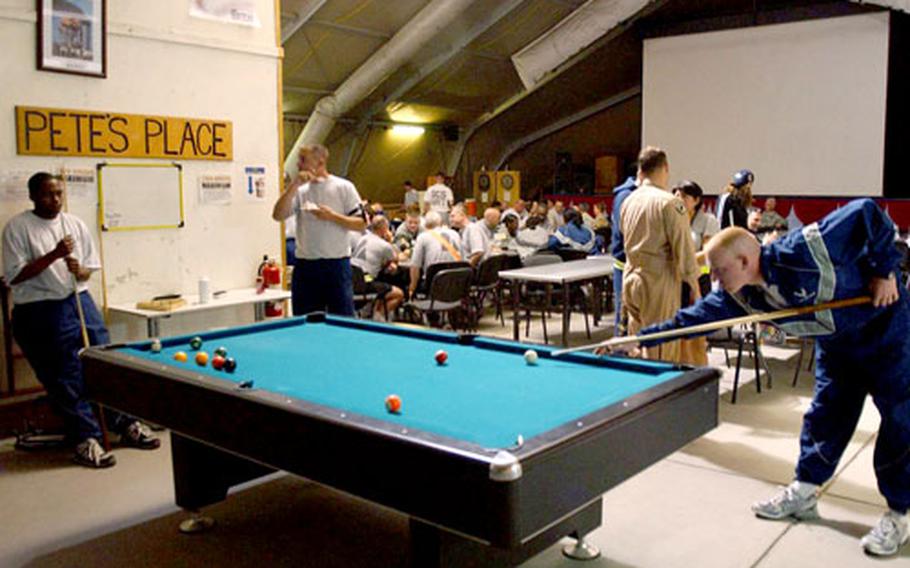 Pete’s Place, seen here, and Shooter’s are the two recreation centers on Manas Air Base. Between them, they offer the servicemembers stationed here, and those in transit, pool, television, movies, card and board games, bingo and video games. For the first extended period since Americans built the base in 2001, going off base is now forbidden. (Michael Abrams / S&S)

MANAS AIR FORCE BASE, Kyrgyzstan &#8212; Before the major went missing, airmen posted in this former Soviet republic had the best of both worlds. They went hiking and horseback riding in the mountains and were driven to town for shopping and dining. All while getting &#8220;imminent fire&#8221; pay and performing a mission in support of the Afghanistan campaign.

But since the mysterious three-day disappearance of Maj. Jill Metzger, the horses are riderless, the shops unvisited &#8212; and the troops disgruntled.

For the first extended period since Americans built the base in 2001, because of Metzger&#8217;s experience and her alleged abduction, going off-base is now forbidden.

What happened must be determined before troops can go back to the capital of Bishkek, Carpenter said, so the command can assess the threat and if necessary institute new procedures and policies to prevent a similar event.

She also said that conclusions from the investigation &#8212; now being handled by the U.S. Justice Department &#8212; can&#8217;t come too soon. Not only do airmen want to go off-base, she said, but the 600 Americans in Kyrgyzstan, including families of contractors working on the base, need to know if they&#8217;re at risk.

The new restriction came just as most of the base&#8217;s 1,000 military residents had completed their four-month assignment and flew back to the U.S., and were replaced throughout September with a new group. Many of them had been briefed on the lockdown beforehand but aren&#8217;t happy about it.

&#8220;I was dying to go off-base. This is the only time I will have a chance to see Bishkek,&#8221; said Ali Kewal, a Virginia-based Defense Department chemical and safety engineer who was on an inspection tour of several bases.

Metzger, a 33-year-old personnel officer, disappeared from a Bishkek shopping center Sept. 5 &#8212; just days before her deployment at Manas ended and she was to be flown back to Georgia, where her husband of 10 days, an Air Force captain, waited.

She turned up three days later at a house a few miles from the city, with her hair cut and dyed, her feet bloodied, in clothes that were far too large, according to news reports.

Metzger told authorities that someone had placed a hard object in her pocket with a note saying it was a bomb, and instructed her to go to a place where she was then abducted by a woman and two or three men in a minibus, according to news reports. She said she escaped from a dark room where they were holding her after hitting one of her captors.

She also said she felt like she was &#8220;in a trance,&#8221; according to press reports, as she followed instructions on the note.

Within hours of her reappearance, she was whisked out of the country, despite local police authorities&#8217; claims that they needed to further question her and have her assist in the investigation.

She was flown first to Bagram Air Base hospital, then on to Landstuhl Regional Medical Center in Germany. The Air Force won&#8217;t comment on why she was taken to Bagram, which seems out of the way, or what her condition was, other than that she had no serious physical injuries. Nor will officials discuss why she was flown out of the country so quickly.

&#8220;They made that decision on what was best for her. She was taken to where they could take care of her,&#8221; Carpenter said.

Air Force Capt. Dustin Hart, a spokesman from Moody Air Force Base, told Stars and Stripes in a Tuesday telephone interview that Metzger is on leave with her family, and plans to be back on duty &#8220;some time in early October &#8212; we don&#8217;t have an exact date.&#8221;

&#8220;Our main focus will be helping her reintegrate with her unit and to her military duties,&#8221; Hart said.

Local police officials have expressed their disbelief in any abduction. One said Metzger, whose long blonde hair had become dark and short by the time she turned up, also had dye on her hands. &#8220;It seemed to me her testimony was little believable,&#8221; Batmirza Dzhailobayev, chief of the Kant police, told The Associated Press.

&#8220;We know there are a raft of rumors out there, but there&#8217;s nothing we can do about them,&#8221; Air Force Master Sgt. Carolyn Gwathmey, a spokeswoman for the Office of Special Investigations, said in a Tuesday telephone interview.

In the meantime, troops are waiting to hear the disposition of the case and wonder if their whole deployment will be spent on base.

Staff writer Lisa Burgess contributed to this report from Washington.