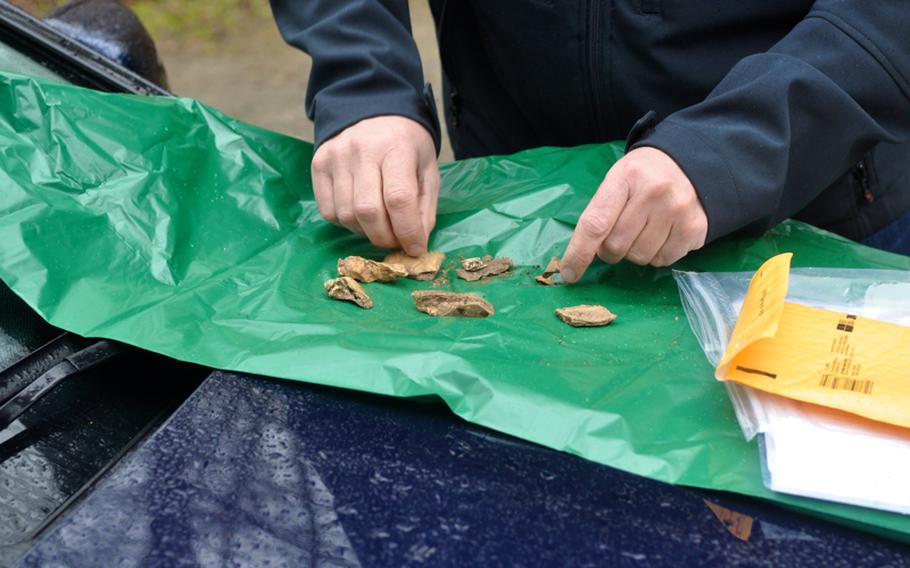 Buy Photo
Boeblingen Police Detective Rainer Schaber, on April 5, 2012, inspects bone fragments found by U.S. metal detector enthusiasts at what is believed to be a World War II crash site near the town of Grafenau, Germany. (John Vandiver/Stars and Stripes)

Buy Photo
Boeblingen Police Detective Rainer Schaber, on April 5, 2012, inspects bone fragments found by U.S. metal detector enthusiasts at what is believed to be a World War II crash site near the town of Grafenau, Germany. (John Vandiver/Stars and Stripes) 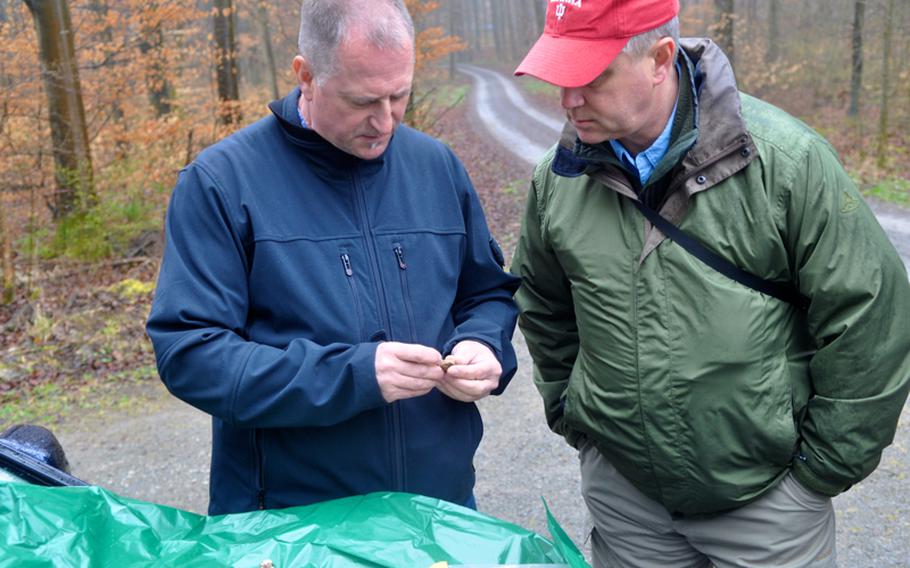 Buy Photo
Boeblingen Police Detective Rainer Schaber shows Sean Schulze of the U.S. Liaison Office human remains Schaber is inspecting near the town of Grafenau, Germany, on April 5, 2012. The remains were found by U.S. metal detector enthusiasts at what is believed to be a World War II crash site. (John Vandiver/Stars and Stripes) 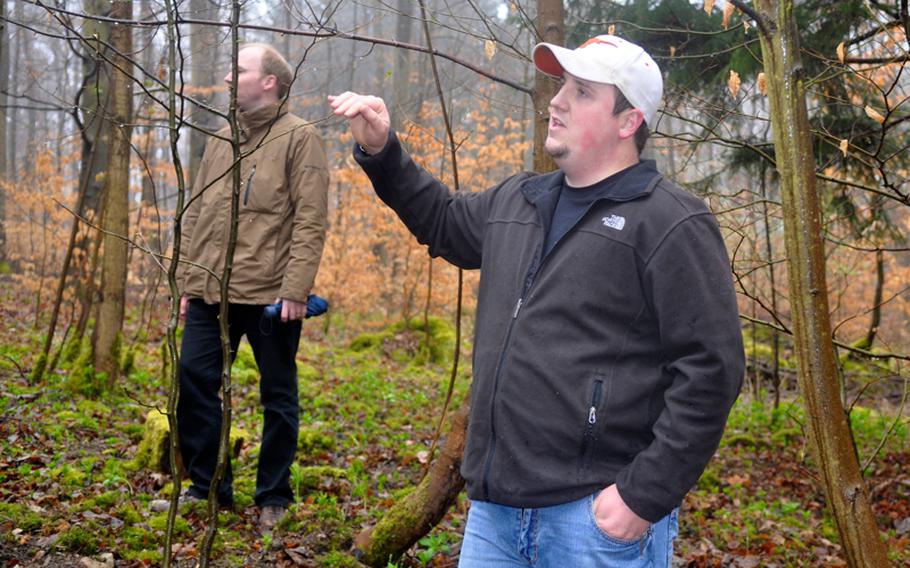 Buy Photo
Metal detector enthusiast Kolby Lanham shows Boeblingen Police detectives what he believes is a World War II crash site, April 5, 2012, near the town of Grafenau, Germany. He and his fellow enthusiasts found human remains they suspect belong to a crewmember of a crashed American bomber. (John Vandiver/Stars and Stripes) 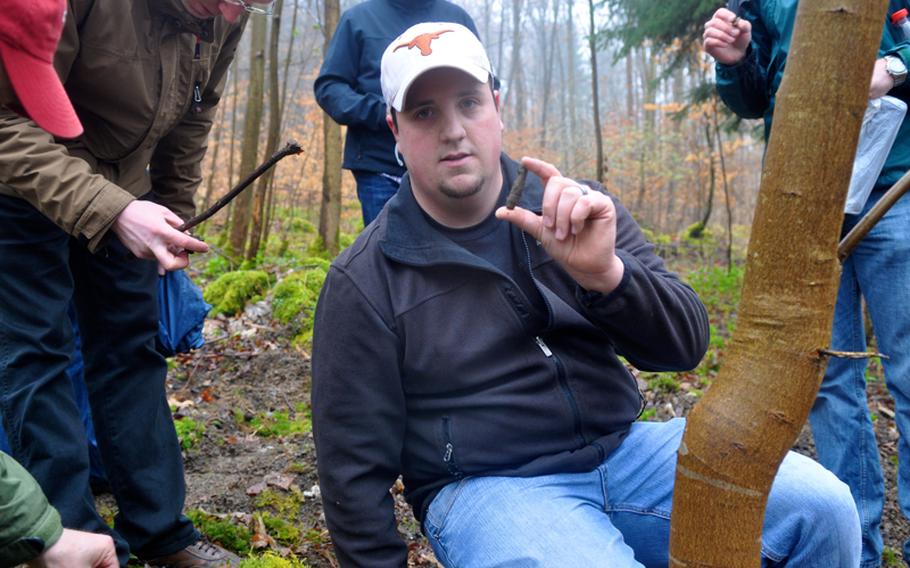 Buy Photo
Kolby Lanham, a Spangdahlem-based airman, holds up a .50-caliber bullet found at what is believed to be a World War II crash site near the town of Grafenau, Germany on April 5, 2012. (John Vandiver/Stars and Stripes) 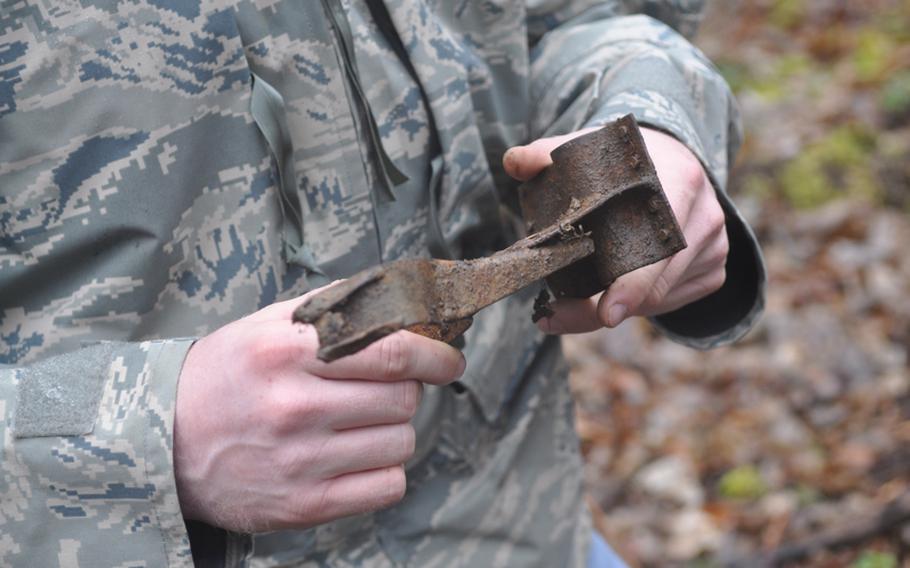 Buy Photo
Ray Vinton, a Spangdahlem-based airman and metal detector enthusiast, holds a piece of debris believed to be from a World War II crash of an American bomber near the town of Grafenau, Germany, on April 5, 2012. (John Vandiver/Stars and Stripes) 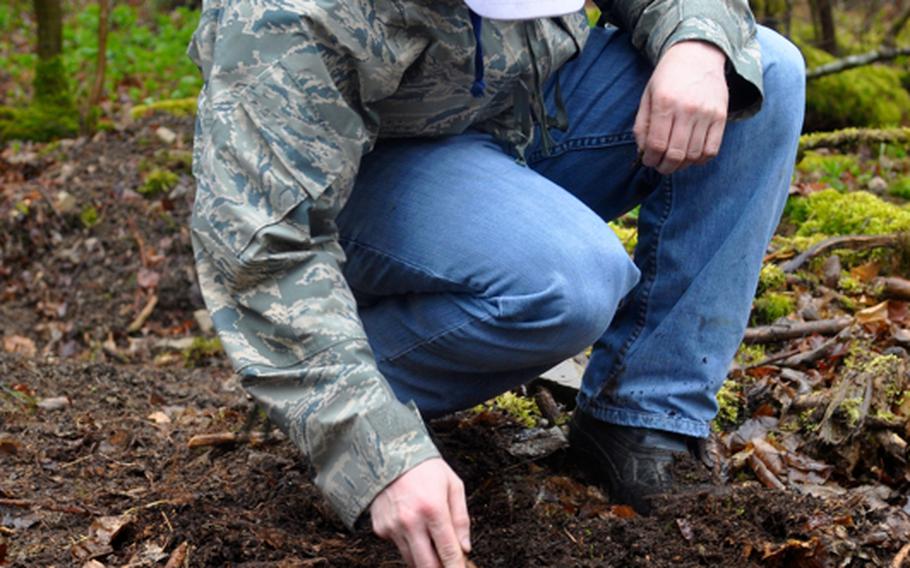 Buy Photo
Ray Vinton, a Spangdahlem-based airman and metal detector enthusiast, sifts through the dirt of what is believed to be a World War II crash site of an American bomber near the town of Grafenau, Germany, on April 5, 2012. (John Vandiver/Stars and Stripes) 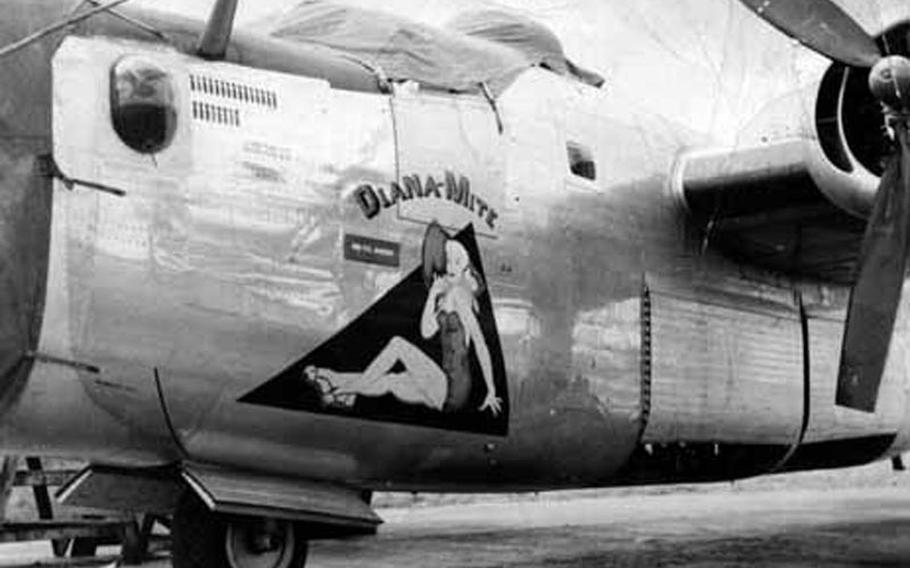 After uncovering what he believes to be the crash site of a World War II bomber, metal detector Kolby Lanham tracked down relatives of some of the crew members of the Diana-Mite. In addition to old stories, some of those relatives shared pictures, including this one of the Diana-Mite. The Diana-Mite went down after a mid-air collision in 1944. Lanham thinks there&#39;s a good chance the wreckage he found in the woods near the small village of Grafenau could belong to the Diana-Mite. (Courtesy of Kolby Lanham)

GRAFENAU, Germany &mdash; It was an unusual rendezvous: a small group of Americans, a couple of German homicide detectives and a small bag of bone fragments.

Deep in the woods, about 20 miles southwest of Stuttgart, Kolby Lanham, a Spangdahlem airman, handed over the bone fragments he&rsquo;d found.

The German police wanted first to rule out a crime scene. Then, their job was to determine whether the bones were human and whether they dated back to World War II, because they were found at what is believed to be a B-24 crash site. The police noted the small sample size, as they looked over the few pieces of bone.

&ldquo;There might be bigger ones,&rdquo; Lanham told the detectives during the April 5 meeting in the woods. &ldquo;We just stopped digging.&rdquo;

For Lanham and his fellow metal-detecting enthusiasts, the find near Stuttgart was one of the more important in their years of treasure hunting in the backwoods of Germany.

They&rsquo;ve dug up everything from Nazi military coins to artifacts from the Roman Empire.

&ldquo;It&rsquo;s a really cool hobby,&rdquo; said Lanham, one of the more active members of the Spangdahlem Metal Detectors Club.

But during the expedition to the area around where they believe the B-24 crashed, Lanham and his friends think they uncovered something more important than rusty old war relics. They found what could be the remains of a U.S. servicemember, someone they believe might have been killed during a World War II bombing run over Germany.

German law enforcement, which recently completed an analysis on the bones, confirmed that the remains are human and are old enough to date to World War II, according to Boeblingen police detectives.

Now, it&rsquo;s in the hands of the U.S. military to determine whether Lanham&rsquo;s theory about the bones is correct. More research is needed to make that confirmation, according to the Joint Prisoners of War/Missing in Action Accounting Command in Hawaii. The group is responsible for recovering and identifying remains of U.S. servicemembers from past conflicts.

&ldquo;Investigations are still active, and it would be premature to discuss the specifics of the case,&rdquo; said Elizabeth Feeney, a JPAC spokeswoman. &ldquo;If remains of U.S. service personnel are found, JPAC will repatriate the remains to the United States. Once they arrive in Hawaii at JPACs Central Identification Laboratory, the process of forensically identifying the individual begins.&rdquo;

In mid-June, a forensic anthropologist is scheduled to analyze the remains to determine whether they could be correlated to a known missing U.S. servicemember, Feeney said.

Meanwhile, Lanham and the other Americans who belong to the loosely organized Spangdhalem Metal Detectors Club say they&rsquo;re busy searching for other bits of history.

&ldquo;We meet up once or twice a month and go hunting,&rdquo; Lanham said.

Though there are about 115 members, mainly from Spangdahlem and a sister group in Ramstein, there are about 20 regulars who take part in the expeditions. Their trips stretch from the fields of Rheinland-Pfalz and Bavaria to the city of Berlin.

Lanham, who has been detecting for seven years, said the detectors generally keep their trophies.

In the case of Roman artifacts, Lanham said, the group reports what it finds to the Roman land history museum in Trier. &ldquo;The museum lets you keep everything you find,&rdquo; he said. &ldquo;They just want to know what you found.&rdquo;

Though some of the things they&rsquo;ve discovered could easily be sold to collectors, the detectors say they prefer to hold onto the relics they unearth.

&ldquo;For me, the journey is more fun,&rdquo; said Max Northup, a U.S. civilian worker at Ramstein Air Base. &ldquo;You never know what is going to turn up. The story behind it is more interesting.&rdquo;

&ldquo;World War II stuff is everywhere,&rdquo; Lanham said. &ldquo;You can pick any forest. There&rsquo;s everything from helmets to bullets. Whatever it is, there&rsquo;s a history to it.&rdquo;

During the late March outing to the area where they believed the B-24 had crashed &mdash; Lanham had heard about it several years ago from a German friend &mdash; the group didn&rsquo;t expect to find anything more than wreckage.

As they swung their detectors over the terrain, the signal for metal got stronger. Certain they had found the spot, they put their detectors aside and started moving the dirt. That&rsquo;s when they found the first piece of bone among old metal parts.

&ldquo;When we dug it up, we did not expect that,&rdquo; said Northup. &ldquo;We had a conflict of conscience. What to do?&rdquo;

They weren&rsquo;t sure they should tamper with the scene. But, they worried that the small pieces of bone could get lost or eaten by wild boars rooting in the dirt. Lanham gathered the bone fragments. He then reached out to the German Graves Commission and JPAC.

Feeney of JPAC said it would have been preferable if they had left the site undisturbed.

&ldquo;Disturbing a site is similar to disturbing a crime scene and may potentially destroy forensic evidence needed to make an identification that holds up both legally and scientifically. These activities may hinder the recovery process and delay future identifications,&rdquo; Feeney said.

Though JPAC has only begun to research the history of the crash site, Lanham believes he&rsquo;s begun to piece together what happened.

The crash likely involved a midair collision of a B-24 called the Diana-Mite and another aircraft called Our Baby during a bombing run over Germany in July 1944, according to Lanham, who looked up the military historical records of the crash. The official Missing Air Crew Reports from that time pinpoint the crash site of those planes in the area where Lanham and his friends were searching.

Of the Our Baby crew, six were killed and three survived, and all but one of the 10 crewmembers in the Diana-Mite were killed, according to the reports. The MACRs indicate that the main method for identifying the dead servicemembers was through tag numbers, but in the case of the Diana-Mite, three tags were unaccounted for and two of the bodies were burned beyond recognition, records state.

According to the records, three bodies were interred in the forest of Doeffingin, part of the small village of Grafenau where Lanham and his friends uncovered the remains.

What the MACRs don&rsquo;t make clear is whether those remains were recovered by the U.S. in the aftermath of the war, as happened at so many other gravesites. JPAC did not respond to questions about whether the bodies buried in Doeffingin had been recovered.

&ldquo;After speaking with the JPAC historians, additional research is still needed to correlate the aircraft to a specific incident. Stuttgart was a major target of Allied raids and numerous American and British aircraft crashed in the area,&rdquo; Feeney said in a statement.

Lanham believes that if the crash site he found in Doeffingin was that of the Diana-Mite, it is likely the remains were removed from the site in the post-war period and returned to the U.S. or sent to a World War II cemetery in France &mdash; something that was commonplace. The remains he and his friends found could indicate that someone, or at least a part of someone, was left behind, Lanham said.

As part of his effort to learn the history, Lanham said he&rsquo;s tracked down relatives of some of the crewmembers.

&ldquo;I made about 250 calls,&rdquo; said Lanham, who ran into dead end after dead end before locating some of the crew&rsquo;s surviving family.

&ldquo;Their family members were lost here, so to them it&rsquo;s so interesting to know where the plane went down,&rdquo; he said.

There are no guarantees that the wreckage belongs to the Diana-Mite or Our Baby. The metal detectors said they hope JPAC will get to the bottom of it.