A long row of bungalows lines the shore in West Mersea, a small beach town on the island of Mersea. (Sean Kimmons / S&S)

A long row of bungalows lines the shore in West Mersea, a small beach town on the island of Mersea. (Sean Kimmons / S&S) 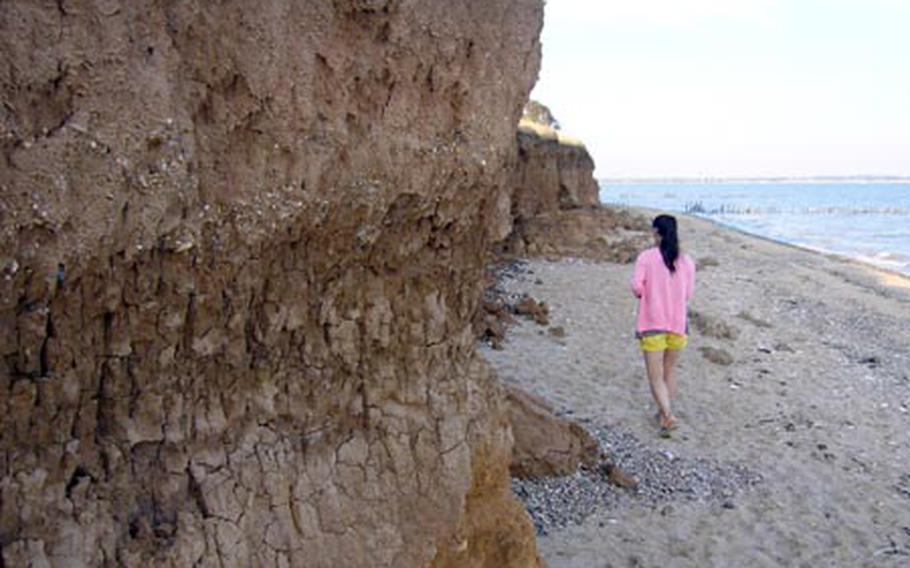 A beachgoer scours for seashells along a sandy beach next to a cliff near Cudmore Grove Country Park on the island of Mersea. (Sean Kimmons / S&S) 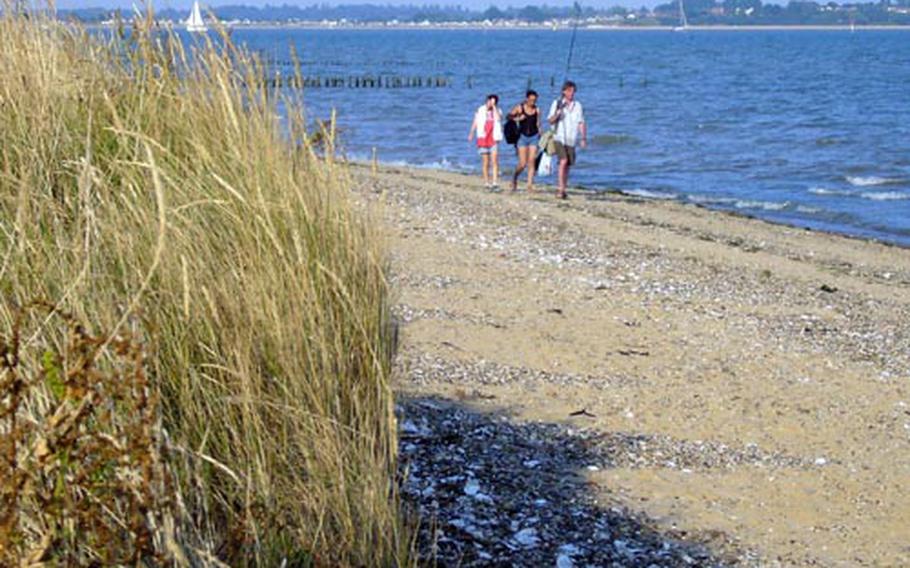 A family treks the shoreline en route to a nearby fishing spot at Cudmore Grove Country Park on the island of Mersea. (Sean Kimmons / S&S)

MERSEA &mdash; Stretched out on a freshly cut field with the sound of calm waves breaking on a nearby shore in the background, I found it hard not to slip into a lazy catnap.

A few steps away, the spacious lawn dropped five or so feet to the shore on the tiny island of Mersea in Essex, near Colchester. Further down, the cliff face grew to more than 20 feet.

Within the island&rsquo;s Cudmore Grove Country Park, handfuls of beachgoers trekked along the sandy, sometimes rocky, shoreline in search of fishing spots or scenery. Others skipped stones and seashells out into the sea or mingled with friends over drinks.

One of the social drinkers tossed an empty bottle of wine into the waves, with a written letter trapped inside. Will it make the journey across the English Channel, I thought. Moments later, the bottle made landfall &mdash; but only a few feet from where it was thrown.

Overall, it was a tranquil place to end up on a rare sunny day. And when the sun got too hot, cool sea breezes regularly rushed over the waves and across the island, known as the most easterly inhabited atoll in the British Isles.

The relaxing setting eventually put this reporter and his travel companion asleep as we rested from a 65-mile road trip to get here. It took about an hour and a half from Cambridge because of winding English roads. It&rsquo;s about the same time and distance from RAFs Lakenheath and Mildenhall.

On the other side of the island is its main attraction, the small beach town of West Mersea. Here, bungalows line the coast for as long as the eye can see. Non-tanned Brits enjoying their short summer mainly occupied these little wooden homes, just big enough to hold a single bed and a cooler of beer.

While the adults basked in the sun, kids made sandcastles and playful dogs cooled down in the seawater in front of the dwellings.

Besides turning visitors into beach bums, there are others things to do on the island. OK, you got me. The beaches are just about it. However, there is a small museum and an ancient Roman burial crypt. The museum occasionally offers tours of the crypt, which isn&rsquo;t open to the public.

A couple of seafood restaurants and a winery also are scattered around the island. But if the weather isn&rsquo;t good enough for the beach, don&rsquo;t bother. The island doesn&rsquo;t have "sea" in its name for its vineyards.

Drinks: Almost 40 kinds of cocktails including martinis, daiquiris, Long Island iced teas and champagne concoctions for 5.50 pounds each. Selected drinks are on special this summer for only 2.95 pounds. Beer and an extensive wine list are also available.

Food: Typical pub grub including deli sandwiches (7 pounds), salads (7 to 10 pounds), burgers (8.45 pounds) and pastas (9 to 11 pounds), and English fare from fish and chips and all-day breakfast to sausages and mash, between 9 and 10 pounds each.