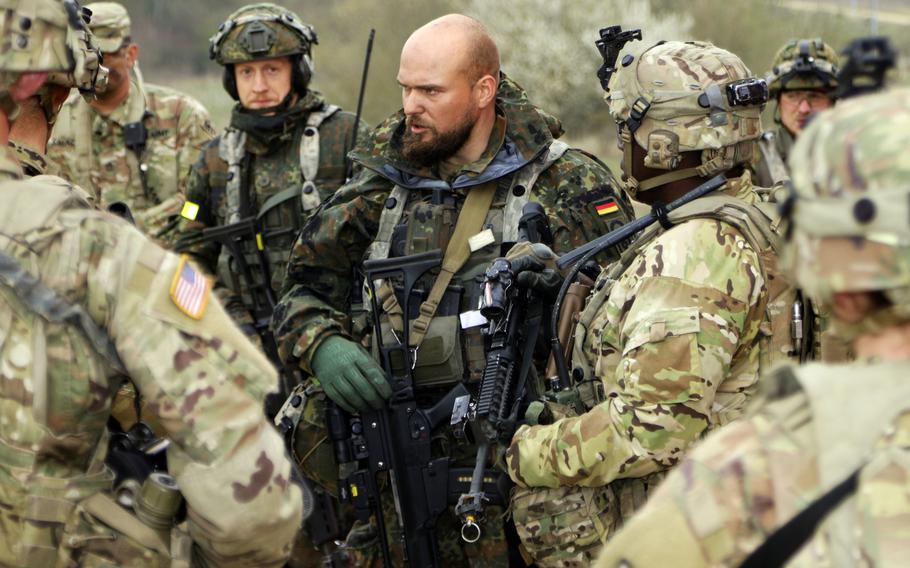 Soldiers of the 92nd Military Police Company strategize with their German counterparts at the Hohenfels Training Area in southeastern Germany. Chancellor Angela Merkel has said the country must strive to improve its military. (Brandon Jacobs/U.S. Army)

Soldiers of the 92nd Military Police Company strategize with their German counterparts at the Hohenfels Training Area in southeastern Germany. Chancellor Angela Merkel has said the country must strive to improve its military. (Brandon Jacobs/U.S. Army) 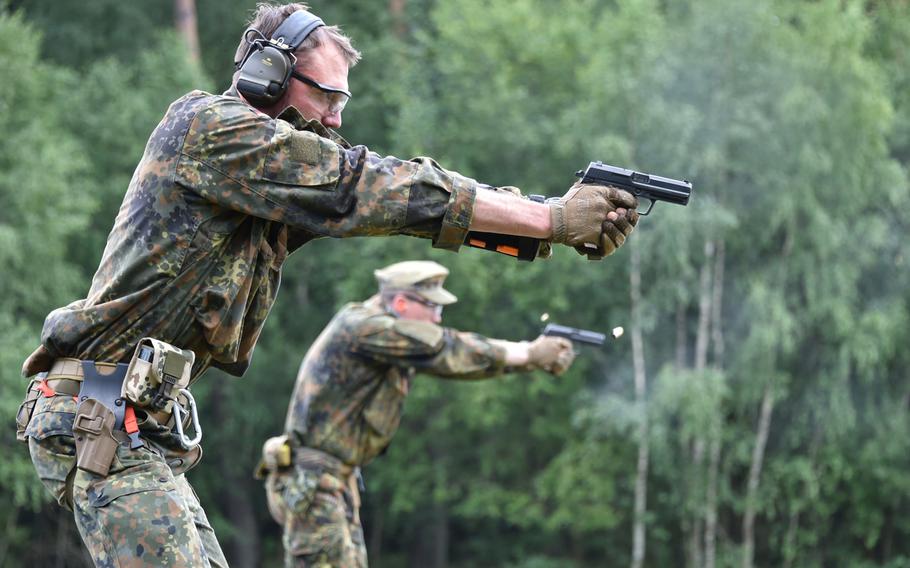 Merkel played down U.S. diplomatic warnings about the possibility of relocating some of the roughly 35,000 troops in Germany to neighboring Poland.

“I think that the German (bases) are good locations for the American soldiers,” she said after a meeting Wednesday with Lithuanian President Gitanas Nauseda, as cited by the German t-online news website.

“There are good reasons for the (U.S.) bases here in Germany but at the same time we know that we must take the pains to get the German military in better shape.”

The German armed forces have come under sharp criticism in recent years for a steady decline in readiness, despite growing security threats from Russia and others.

President Donald Trump has repeatedly criticized NATO members, specifically Germany, for not stepping up to contribute more for the defense of the continent.

Merkel appeared to be referring to a statement last Friday by U.S. Ambassador Richard Grenell, who said it was “actually offensive” that Washington had to pay to keep its forces based in Germany while Berlin failed to meet NATO’s defense spending target of 2% of its gross domestic product.

Grenell told the German dpa news agency that he agreed with Mosbacher.

Poland has offered to contribute up to $2 billion to construct a permanent U.S. base. The U.S. currently maintains troops in Poland only on a rotational basis.

Nevertheless, critics have said that a large-scale move from Germany could be expensive and disruptive. It would move U.S. troops from a country with a high-quality infrastructure where they have trained since the end of WWII.

Creating a network of permanent bases in Poland would require new roads, schools, shops and other facilities.

NATO’s 2% of GDP defense spending target dates from 2014, when the Obama administration pushed through a statement pledging that NATO members would reach that goal within a decade.

On Tuesday, Merkel said Germany was moving to increase military spending. Its defense budget would grow to 1.41% of GDP by next year and to 1.5% by 2020.

“So this means in the direction of 2%, and we will continue to go in this direction also after 2024,” Merkel said, as cited by Reuters.