Merkel, at odds with Trump, confirms Germany will miss NATO target on spending 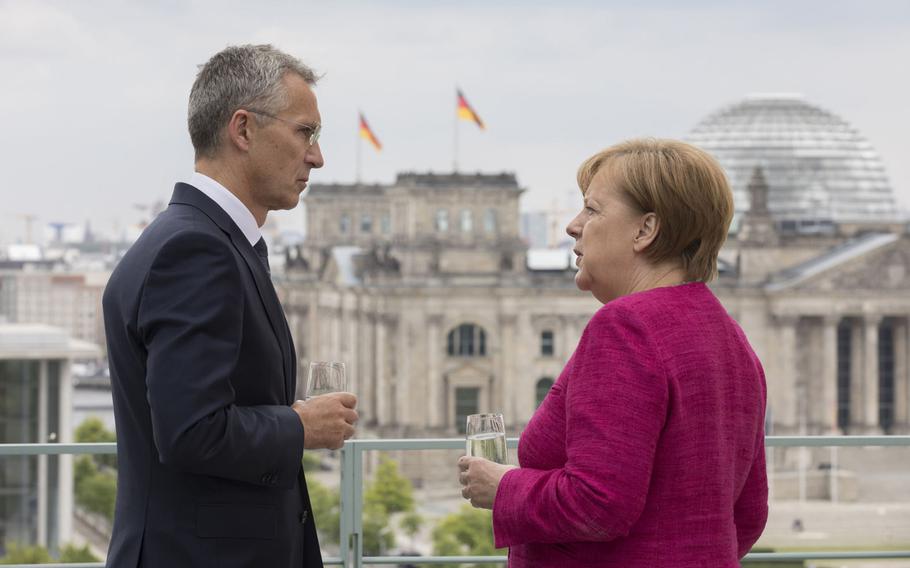 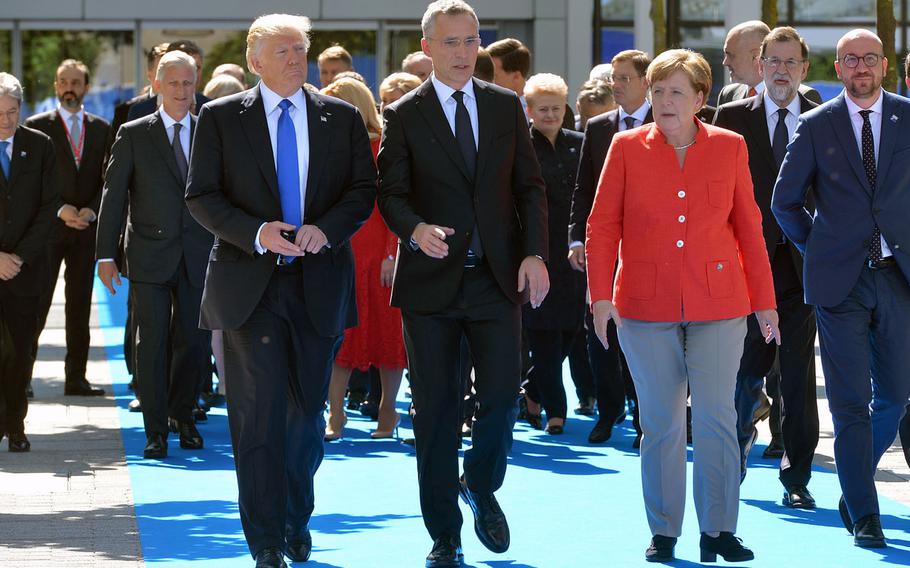 President Donald Trump, NATO Secretary-General Jens Stoltenberg and German Chancellor Angela Merkel walk with other leaders during a NATO meeting in Brussels, Belgium, May 25, 2017. Merkel said Friday that Germany will fail to meet a key NATO defense spending deadline, putting Berlin at odds with Washington one month ahead of a major alliance summit. (Courtesy of NATO)

STUTTGART, Germany — Chancellor Angela Merkel said Friday that her country will fail to meet a key NATO defense spending deadline, putting Berlin again at odds with Washington one month ahead of a major alliance summit where NATO’s unity could be challenged.

President Donald Trump, who has repeatedly blasted Germany for failing to elevate defense spending to 2 percent of its gross domestic product, will arrive at a July summit in Brussels with expenditures at the top of his agenda.

“Some argue that it is too slow, our progress,” Merkel said.

Stoltenberg credited Germany for recent increases but called on Berlin to do more.

“It is the biggest economy in Europe and what it does matters,” he said.

Lack of defense spending by some NATO members has dominated Trump’s views on the alliance, which he says benefits Europe more than America when it comes to security guarantees.

In July, the alliance is expected to make decisions to improve the readiness of its forces and enhance counterterrorism efforts. But the meeting also comes at a time of tension between the U.S. and its closest allies.

After a recent G-7 meeting in Canada, Trump called Canadian Prime Minister Justin Trudeau “dishonest” and refused to sign a communique on the outcome of the meetings.

In response to the G-7 talks, German Foreign Minister Heiko Maas in a speech Wednesday in Berlin said Trump poses a threat to the post-World War II rules-based system that the U.S. primarily designed.

Merkel and Stoltenberg downplayed the rifts with the U.S. on issues such as trade, saying they would not affect NATO.

“Despite all the difference of opinion, I believe (the July summit) will be a very constructive meeting,” Merkel said.

Added Stoltenberg: “When it comes to defense and security, we don’t see any weakening of the transatlantic bond.”

Stoltenberg said U.S. troop numbers and military investments in Europe have risen under Trump, which is a sign that “actions speak louder than words.”

“What Trump risks with his constant attacks on NATO, his disrespect of European and Canadian leaders (including not only Trudeau, but most critically German Chancellor Angela Merkel), is the stability and longevity of the transatlantic alliance,” Stavridis wrote Friday in a Bloomberg editorial. “This is more than a ‘family spat’... This division is beginning to feel permanent, at least in the context of the Trump administration.”