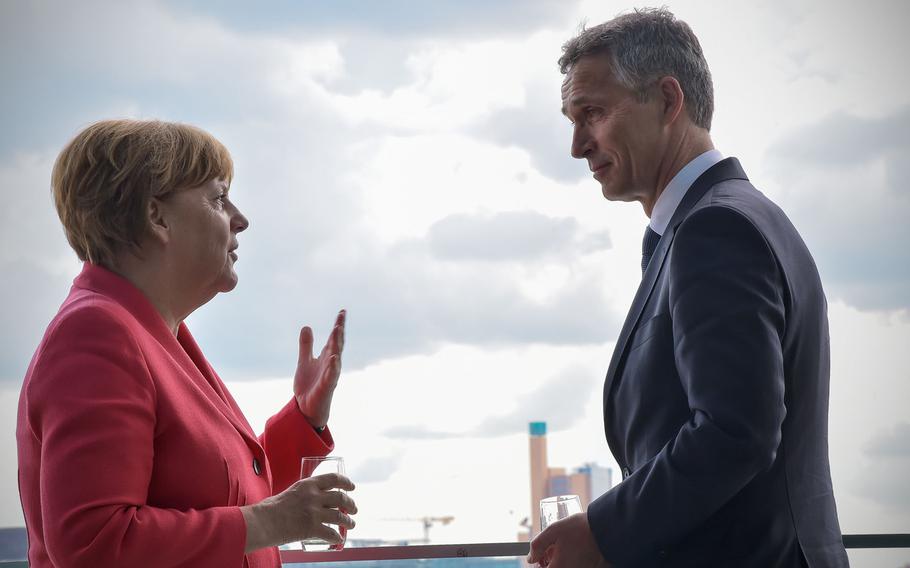 Germany will commit a battalion’s worth of troops to NATO’s mission in the Baltics as part of a plan to beef up the allied presence in the region while maintaining a post-Cold War pledge not to position permanent forces along Russia’s border, German Chancellor Angela Merkel said Thursday.

“We will contribute also to the rotating presence there, and we want to do so particularly in regard to Lithuania,” Merkel said during a news conference in Berlin.

When NATO heads of state meet in July for a major summit in Warsaw, at the top of the agenda will be a plan to deploy multiple “reinforced battalions” to Poland and the three Baltic states, all countries that have been vocal about the need for a NATO presence in the face of a more assertive Russia.

For more than a year, allies have been debating how the increased presence in the east should be structured. Some members have sought permanent forces along Russia’s periphery. But Germany and several other members have long resisted permanent bases or troop deployments, citing concerns about antagonizing Russia and the need to uphold old agreements with Moscow that place limits on NATO’s regional force size.

“Germany has always been standing firmly by the NATO-Russia founding act,” Merkel said.

NATO’s plan to deploy troops in the Baltics on a “rotational” basis is in response to a need to deter potential threats from the east, said Merkel, who also called for more talks with Russia ahead of NATO’s Warsaw summit.

Moscow has complained that the beefed-up NATO presence in the Baltic presents a threat to its own territory, namely the enclave of Kaliningrad wedged between NATO members Poland and Lithuania.

NATO Secretary-General Jens Stoltenberg, who was in Berlin Thursday for discussions with Merkel, welcomed Germany’s decision to contribute troops to the Baltics. NATO continues to work out the details on its plan for a larger forward presence in the east, which will involve “several reinforced battalions,” he said.

Since Russia’s 2014 intervention in Ukraine, relations with Moscow have been at a post-Cold War low. Still, Stoltenberg said that NATO is not in a new Cold War and that no NATO ally faces an “imminent threat” from Russia. He described NATO’s efforts as defensive in nature and taken in light of Russia’s “willingness to use force to change borders” in Ukraine.

“We do not want a new Cold War. We do not seek confrontation with Russia,” Stoltenberg said.