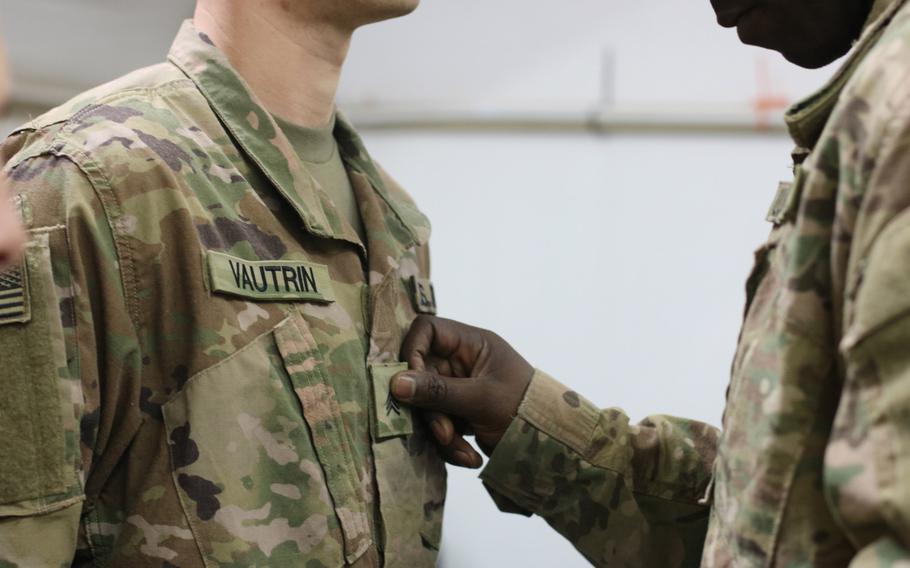 Sgt. 1st Class Colin Anderson attaches sergeant rank on Jon Vautrin's uniform during a promotion ceremony at Camp Arifjan, Kuwait, April 1, 2019. The Army is revamping its promotion board processes to focus promotions on merit, not time served. It is the first major overhaul of the system since 1969, the Army said. (Nahjier Williams/U.S. Army)

The Army will revamp its centralized promotion board processes over the next few years to focus on advancing senior noncommissioned officers on merit, not time served.

Gone will be annual sequenced promotion lists and the “P” status for promotable NCOs, to be replaced by quarterly forecasts and monthly selection processes for sergeant and above.

Officials also plan to expand the use of merit-based rankings for other uses beyond the promotion process, such as for identifying subpar soldiers for separation, the Army said in a directive published earlier this month.

The changes are aimed at “promoting the right people at the right time,” the service’s top enlisted soldier said in a statement last week. The first changes will take effect this year with the master sergeant promotion board but are slated to be implemented across the NCO corps in the next three to four years.

“This is the first major overhaul to our enlisted centralized promotion board in the 50 years we’ve conducted them,” said Sgt. Major of the Army Dan Dailey, as quoted in the statement. “We will see a number of benefits with these changes, but the most important one will be the impact to readiness.”

The new system is expected to ensure retention of the “most talented” NCOs, said Dailey, who began efforts to revise the process two years ago.

“This change now truly rewards the most qualified soldiers who are seeking advancement instead of simply promoting people based on seniority,” he said.

The current system, which dates back to 1969, relies on long-range projections of soldiers leaving the force, sometimes created 24 months in advance, which has at times resulted in surpluses of promotable soldiers, said Gerald Purcell, an Army personnel official and retired sergeant major responsible for integrating NCO professional development policies. The new system is meant to fix such inefficiencies, he said.

“We are creating a process that reacts to emerging requirements and it stops us from creating skill and grade imbalances,” he said, adding that it is expected to prevent promotion stagnation or the need to separate soldiers because there are too many at a particular rank.

The new system will identify soldiers who are “fully qualified” for promotion in each grade and occupational specialty, and then sequence them for promotion using a system that takes skills, knowledge and behavior into account. The current system sequences promotions using time-based measures, which Purcell said can fail to reward or recognize deserving candidates with less seniority.

Merit-based sequence numbers are expected for all ranks sometime this year.

In the next few months, soldiers should be able to privately check their standing on the list, known as an order of merit list, or OML, on the Army Career Tracker website. This year, OML standings will be used for command sergeant major and sergeant major eligibility but will eventually be used for promotion in all other NCO ranks.

Beginning next year, the standings are expected to assist with assignment and training decisions, the Army said in a statement last week. The service will also begin notifying soldiers if they fail to qualify for promotion by not completing the mandatory Structured Self-Development or Distributed Leaders Course.

After a soldier is identified as not qualified for a second time — in 2021 at the earliest — a mandatory separation date will be set for six months in the future. The soldier will be allowed to retire, if eligible, or will be involuntarily separated.

Quarterly promotion forecasts and monthly promotions for all NCO ranks are also slated to be in place by the end of 2021 — soldiers would be notified of their selection for promotion on the 15th of the month, with an effective promotion date on the first of the following month.

The first separations for soldiers who fail to meet qualifications twice are also expected to begin that same year, which will allow the Army to eliminate time-in-service limits for each rank.

“We are calling this a talent management effort,” Purcell said. “There is a place for everybody in the Army as long as you are performing.”