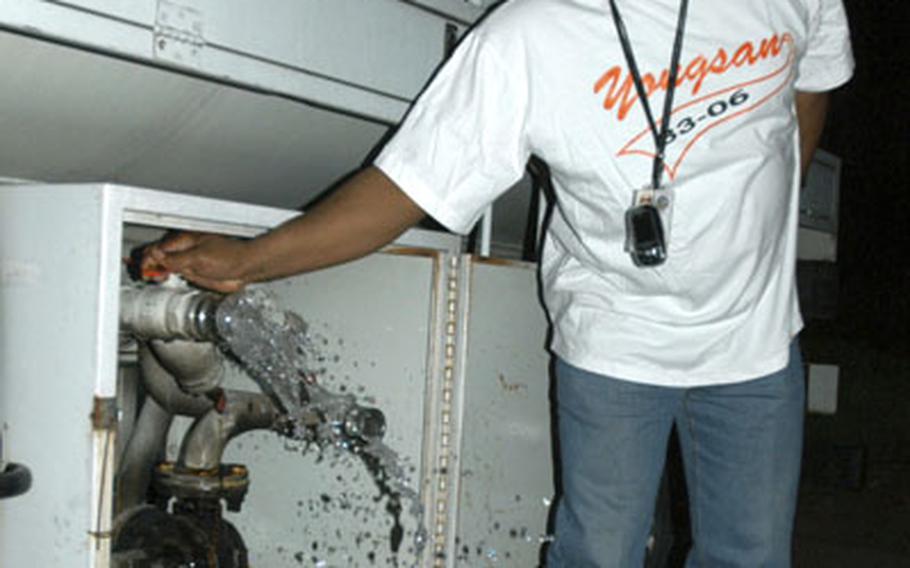 Master Sgt. Tony Anthony, 121st Combat Support Hospital tries the valve on one the water tanker outside his apartment building at Hannam Village. The tanker was one of two provided to mitigate the housing area&#39;s recent loss of potable water due to high levels of mercury. (JImmy Norris / S&S)

Samples were taken from the Hannam Village housing area and from the U.S. Army Corps of Engineers Far East District compound on April 6 as part of a monthly testing because the water is provided by Seoul city. Other U.S. bases in Seoul use wells or their own water treatment facilities.

The samples must be sent to a testing facility on Okinawa because the U.S. military does not have the lab equipment in South Korea to test for heavy metals, officials said.

At about 3:50 p.m. Friday, Yongsan was alerted that both Hannam and the FED compound April 6 samples recorded mercury levels higher than the .002 parts per million that the U.S. Environmental Protection Agency deems the maximum tolerable.

Hannam slipped just past the threshold with .0024 ppm, but the FED compound registered .0092 ppm.

The EPA warns that exposure can lead to kidney disease.

Yongsan officials posted signs on doors, ran warnings on the base radio and television channels and posted a news release on the base Web site to warn residents not to drink or cook with tap water. They also positioned four 1,000-gallon tanks on Hannam so residents would have access to clean water.

Community members expressed dissatisfaction Friday night, saying there wasn&#8217;t enough information available, the warnings posted on base didn&#8217;t say anything about the mercury and they had questions about health concerns.

On Saturday, Yongsan officials warned that people shouldn&#8217;t jump to any conclusions and shouldn&#8217;t automatically assume they&#8217;ve been using tainted water for a month.

&#8220;We do not know that [people at Hannam Village and the FED compound] have been drinking bad water. We are taking steps to confirm initial results,&#8221; said Yongsan Garrison spokesman David McNally. &#8220;Seoul city officials report they have no issues, although they are now doing additional testing.&#8221;

Stars and Stripes was unable to reach Seoul officials over the weekend.

McNally said Seoul adheres to even more stringent standards for acceptable mercury levels; the maximum allowed in their drinking water is .001 ppm, he said.

McNally added that the 18th Medical Command has not received any health-related complaints &#8212; but that medical personnel were to be among officials who will be made available to local residents during a town hall meeting Sunday at the Hannam Village Chapel.

Officials said the water is still acceptable for washing clothes and for showers &#8212; as long as bathers use soap and don&#8217;t get water in their mouths.

The garrison conducted additional testing Friday and rushed the samples to a South Korean facility in Suwon. Results are expected Tuesday.

What is mercury and how is it used? Mercury is a liquid metal found in natural deposits. Electrical products such as dry-cell batteries, fluorescent light bulbs, switches, and other control equipment account for 50 percent of mercury used.

Why is mercury regulated? In 1974, Congress passed the Safe Drinking Water Act. The law requires EPA to determine safe levels of chemicals in drinking water which cause or may cause health problems. The maximum contaminant level for mercury has been set at .002 parts per million.

What are the health effects? EPA has found mercury to potentially cause kidney damage when people are exposed at levels above the MCL for relatively short periods.

How can mercury be removed from drinking water? If contaminant levels are found to be consistently above the acceptable maximum, water suppliers must take steps to reduce the amount of mercury. EPA-approved treatment methods include coagulation/filtration; granular activated carbon; lime softening; and reverse osmosis.