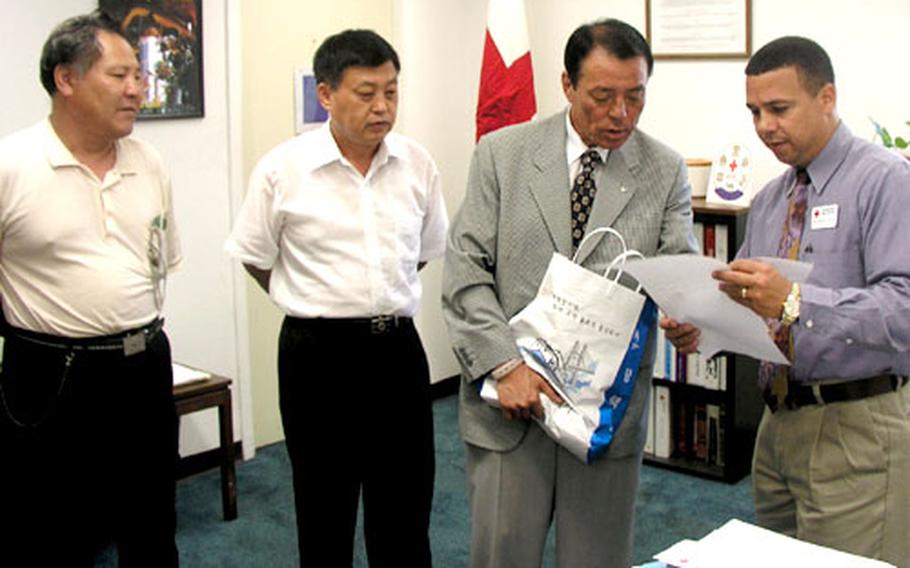 OSAN AIR BASE, South Korea &#8212;- Merchants in the shopping district just outside Osan Air Base have raised about $4,000 to help Hurricane Katrina victims.

Songtan Chamber of Commerce President K.C. Lee delivered the cash in a small shopping bag to the American Red Cross office at the base Wednesday afternoon.

The Chamber represents about 1,000 businesses in the commercial district near the base in Songtan, a district of Pyeongtaek City in west-central South Korea.

The donors were South Korean and American, they said.

The effort brought in $3,856, Lee said. That total included a single $146 contribution from a donor in Wonju City, he said.

The Chamber began the fundraising Sept. 7 and finished Saturday.

The merchants have been doing business with Americans for years, Lee said, adding that they were donating the money because of their relationship with the base and Americans.

After the Sept. 11, 2001, terror attacks in the United States, Songtan merchants closed their businesses for a day in a sign of solidarity with the Americans and flew the South Korean flag at half-staff outside their businesses, Lee said.

Lee and several fellow Chamber members dropped in at the Red Cross Wednesday afternoon and Lee handed the cash to Wilfredo Solis, Red Cross station manager at Osan Air Base.

Solis said he planned to deposit the cash Thursday afternoon at the Community Bank on base and have the funds wired to the Red Cross fund set up to help Katrina victims.

Donations to the Red Cross to aid the Katrina relief effort can be made by calling 1-800-HELP NOW or online at www.redcross.org, Solis said.