Merchants face off with anti-USFK protesters 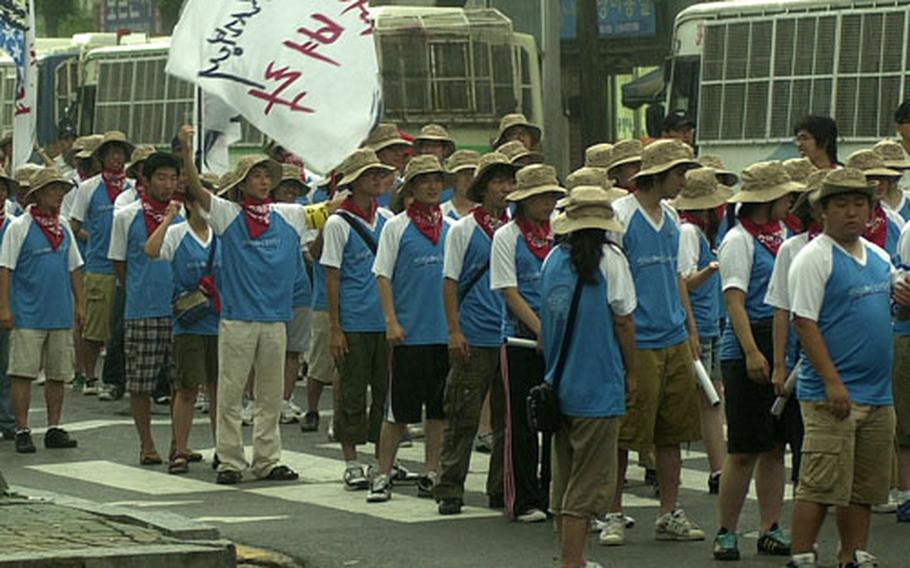 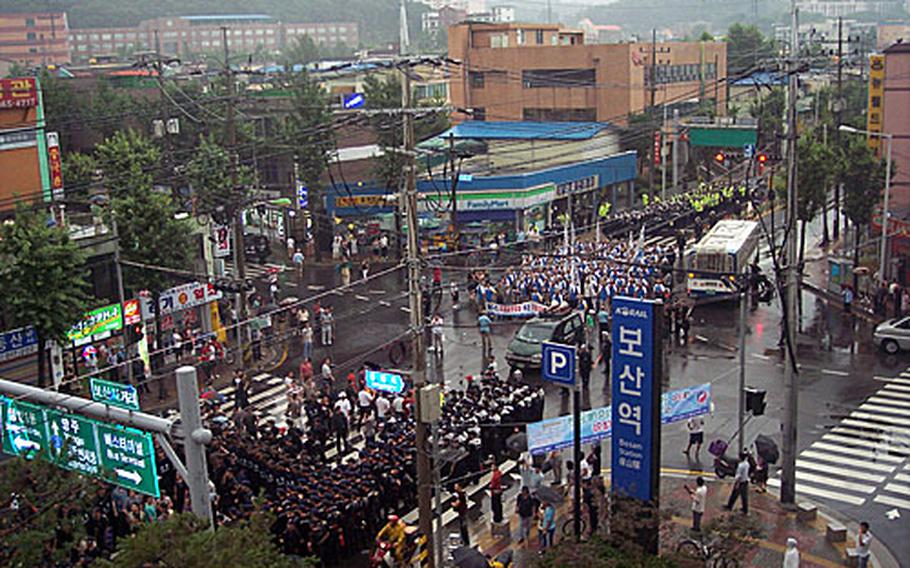 As about 250 anti-USFK demonstrators made their way from Dongducheon&#8217;s Central Park toward Camp Casey, 40 to 50 pro-USFK Merchants Association of Dongducheon protesters walked from the base gate up Route 3 and faced off at the Bosan train station, about a quarter-mile away from Camp Casey&#8217;s main gate.

About 700 South Korean police blanketed the area and prevented the two groups from any large-scale confrontation.

A few individuals shoved and slapped but were quelled by police.

At one point, police turned one of two water cannons on the merchants.

Meanwhile, Camp Casey closed its main gate to vehicles at 2 p.m. and barred soldiers from the protest area.

&#8220;We would rather be absolutely ready for the worst and have nothing happen than to be ill-prepared and get surprised,&#8221; said Lt. Col. Bill Boucher, 2nd Infantry Division provost marshal.

U.S. servicemembers were banned from the New Town and Bosandong &#8220;Ville&#8221; areas of Dongducheon until 1 p.m. Thursday, base officials said.

Servicemembers also were barred from using public transportation in the area, including the subway, until 11 a.m. Thursday.

The anti-U.S. forces protest was organized under the Hanchongryon umbrella group, which has been protesting the presence of U.S. troops on the peninsula for 20 years, base officials said.

In 2004, the group&#8217;s protesters crossed into Rodriguez Range and climbed on military vehicles. In 2002, they threw Molotov cocktails at Camp Essayons in Uijeongbu, base officials said.

At least 250 anti-USFK protesters left Dongducheon&#8217;s Central Park, about one mile from Camp Casey&#8217;s main gate, to head toward the base after 5 p.m.

An hour later, no more than 100 to 150 anti-U.S. protesters remained in the streets, with monsoon rains drenching them.

Army officials had tried to talk the merchants out of protesting, fearing violence, but 40 to 50 merchants showed up anyway.

The anti-USFK protesters were scheduled to hold a candlelight vigil back at Central Park around 8:30 p.m., after the street protest, and sleep at a subway station before leaving on Thursday.

But by 8 p.m. Wednesday, Army and security officials were relieved their worst projected scenarios never played out.

The Hanchongryon protesters are expected to move across the country, demonstrating through Aug. 14, with a protest expected in Incheon on Thursday.